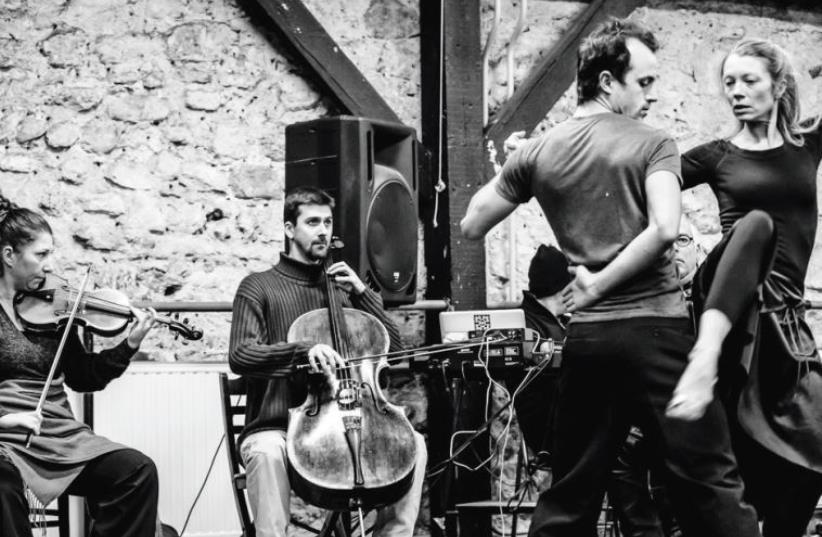 THE GROUP of the Paris Opera Ballet, Incidence Choreographique, directed by Bruno Bouche.
(photo credit: SIMON VALASTRO)
Advertisement
A few days ago when dancer and choreographer Bruno Bouche boarded a plane to Tel Aviv, he did so with many questions in mind.Returning for the fourth time with his company, Incidence Choreographique, Bouche had only recently made a major program change, swapping out an older work for a brand new and not-yet-finished one.“We decided very, very late to make this change in the program,” laughs Bouche over Facetime. “I decided to make a new work especially for this tour. We had 15 days to work on it and it is not finished. It will be a bit of a work in process showing in Israel.”Though his voice betrayed a few errant butterflies in the stomach, Bouche is entirely confident that the program will wow Israeli audiences.While in town, Incidence Choreographique will present a new evening entitled Choreography Affect 2 as part of the Suzanne Dellal Center’s Tel Aviv Dance Festival, as well as in the Karmiel Festival.Twelve years ago, Bouche founded Incidence Choreographique as a platform for members of the Paris Opera Ballet to explore alternative creative outlets. These dancers, Bouche explained, are capable of pretty much anything.“With the Paris Opera Ballet we work with a variety of different choreographers and such different styles. We have done works by contemporary choreographers such as Matts Ek, Anna Teresa De Keersmaker and Pina Bausch.”Perhaps because of their diverse performance roster, many dancers of the Paris Opera Ballet find themselves drawn to create. The company is a staple in many European festivals, presenting contemporary choreographies danced by superb performers.Bouche is no stranger to working quickly. As a member of the elite Paris Opera Ballet himself, Bouche finds time to create and present his choreographies in the gaps of an already full schedule.“I create very fast,” he said.“If I am making a 30-minute piece, I will need around one month. I will say that this process was particularly rushed.”The new work, entitled Between Light and Nowhere, is a solo for Aurelien Houette.“Usually, when I create, I begin with one idea or image.Here, the idea was to put Aurelien in a dress. I wanted to see him dance with a dress because I think it’s a strong image. So we began with that and then we chose the music.As we worked, different issues arose such as questions of gender and even religion. There is a reference to the whirling dervishes that we kept coming back to.”The rest of the program is comprised of what Bouche refers to as “very French dance.”Joining Bouche’s works on the program are creations by celebrated choreographers such as Thierry Malandain, Yvon Demol and Michel Kelemenis.“It was important for me to include a work by Kelemenis.We are in very good contact with him and I feel that we are of the same mind in regards to how we understand dance.It’s often hard for French people to understand that dancers of the Paris Opera Ballet want to make contemporary choreographies. I think Kelemenis understands the need to propose different styles,” explained Bouche. “If I had to describe the program in three words I would say creation, tradition and diversity.”

Incidence Choreographique will perform at the Suzanne Dellal Center on July 27, 28 and 29 (www.suzannedellal.org.il) and at the Karmiel Festival on July 30 (www.karmielfestival.co.il).