The Respekt project started in 2011 with artists in Russia and the German Goethe-Institut in Moscow. 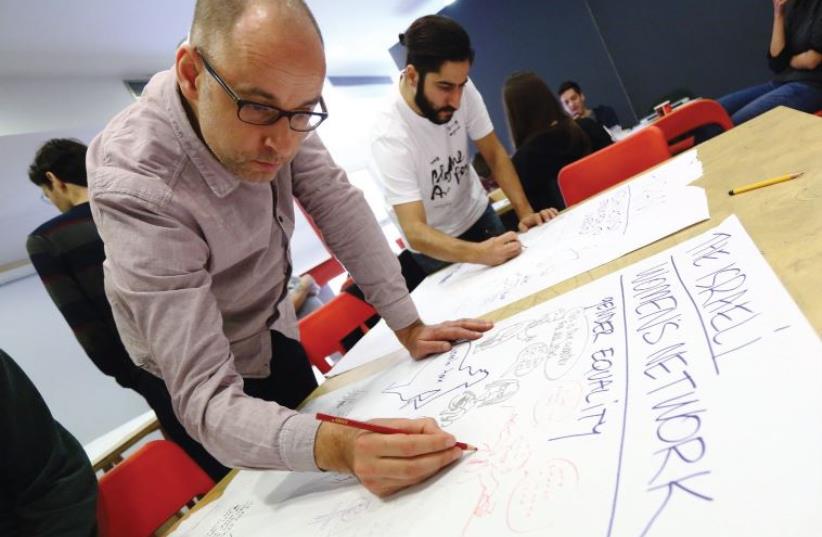 German cartoonist Reinhard Kleist (left) working with other international artists on the Respekt project at Holon’s Israeli Cartoon Museum
(photo credit: FELIX RETTBEG)
Advertisement
The Israeli Cartoon Museum in Holon is working with international artists on a new project called Respekt – Internationale Comics.One of the artists is 45-year-old German graphic designer and cartoonist Reinhard Kleist, who became known to a wider audience with his 2014 illustrated book The Boxer: The True Story of Holocaust Survivor Harry Haft.His latest book is about Somali runner Samia Yusuf Omar, entitled Der Traum von Olympia (The Dream of Olympia).The Respekt project started in 2011 with artists in Russia and the German Goethe-Institut in Moscow. Its aim is to use illustrated stories to focus on social topics such as tolerance, equality, immigration, gender, human rights, feminism, respect and popular culture. To date, 40 booklets have already been published.The authors come from England, Ukraine, Russia, Germany and Spain. The methodology of the project is to engage in discussion, not preaching. The booklets can be used in schools from second grade to high school.In the first week of December, the Goethe-Institut Israel invited a range of artists to take part in a similar project. Among the guests was Kleist. “I already have completed some projects with the Goethe-Institut. In one case it was the kick-off for the longer comic book project The Dream of Olympia,” he said.At the workshop in Holon, the artists introduced themselves, followed by the representatives of the NGOs that are participating in the project. That way, the artists could think about the topic they wanted to work on and which NGO they would like to collaborate with for their work. Kleist told The Jerusalem Post, “In the end, there will be comic booklets of around 10 pages that can be used in schools, for example.”Kleist is still deliberating about the topic he will work on. “I was thinking about doing something from the LGTBQ [Lesbian, Gay, Transgender, Bisexual and Queer] community, but I am still undecided. Or perhaps I could work on sports activities of young Palestinians, such as parkour, or free running, in Kalkilya.But as I am staying here for several more days, I can think about doing something that is connected with my visit here.”In three months, the comic books in Hebrew and Arabic will be completed. Some books that have already been created will be translated into Hebrew and Arabic as well. When asked whether he thought there was anything Germany could learn from Israel, Kleist said, “I think that we in Germany are still living in our own small world, and we really do not want to get to know much from other cultures. We feel annoyed at best if there is a conflict, and we fear foreign infiltration. Although living together here is not without its complications, we can learn from Israel how to absorb so many influences from different cultures and countries.”Is this event in Israel a one-shot deal? Time will tell. There are already discussions about having another workshop in 2016.