The Israeli dance company presents an original production based on the life and music of one of France's most recognizable stars. 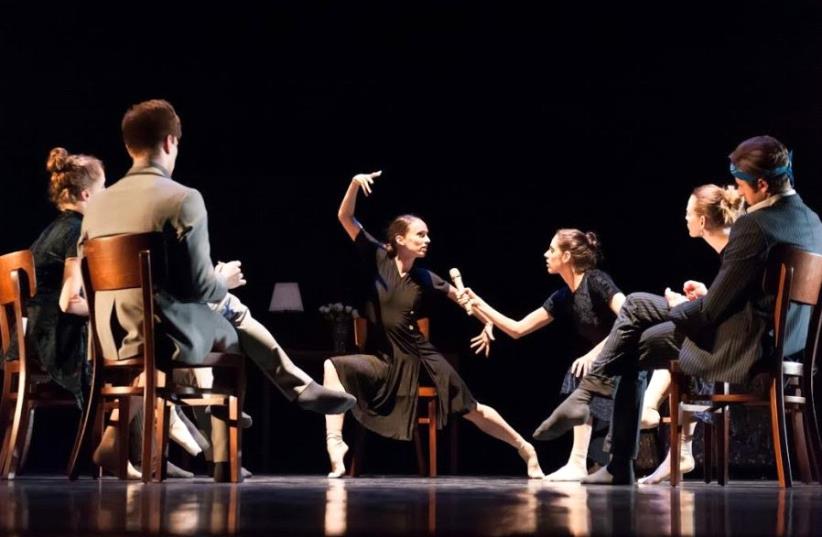 The Israel Ballet's performance of 'Piaf'
(photo credit: IRA TASHLITSKY)
Advertisement
Paying artistic homage to France’s most celebrated chanteuse in history is no easy feat. Yet the Israel Ballet has engaged in an ambitious effort to bring an original work to the stage. The company took to the Tel Aviv Performing Arts Center on Tuesday to perform the latest piece in its repertoire - ‘Piaf’ - an eponymous production based on the life and music of world-renowned songstress, Edith Piaf.  Choreographed by Italy’s Mauro Astolfi, the piece employed a composition of contemporary, non-traditional movement in its interpretation of the charismatic cabaret singer and the tumult and hype that surrounded her. While in form with Astolfi’s signature style, the presentation felt anxious and animalistic instead of evoking the heart-wrenching hypnosis that is elicited in Piaf’s epic ballads. Notedly, the prowess of the vivacious dancers was utterly impressive, with their demonstration of stamina, range of motion, strength and flexibility. The troupe of approximately 20, vigorously danced 90 minutes of a vast series of quick-tempoed movement without intermission.
(Ira Tashlitsky)
The display opened with a jittery theatrical dance scene resembling Piaf manically addressing a press group. The sequence ends with a live accordion-accompanied rendering of “La Vie en Rose” by Israeli child singer Roni Maduel.  True to the focus of the production, the stage design reflected Piaf’s passionate yet volatile private life. A propped-up bed and salon setting served as the central fixtures while the stage view was framed by noir bar lamps overhead downstage and by a doored-wall upstage. The ambiance of the performance was set by the dark-toned lighting dotted with spotlight effects that evoked the feeling of a mid-century smoky nightclub lounge.  Despite her small stature, Piaf generated a gargantuan legacy, as was evidenced by the audience singing along when the speakers blared quivering favorites such as ‘La Foule,’ ‘Non, Je Ne Regrette Rien’ and ‘Padam Padam.’ While Piaf's life was undoubtedly marked by discord, the ballet seemed devoid of her hopeful perseverance. Although it encapsulated her gravitas, it failed to epitomize the sweeping beauty she created amid the sorrow.
(Ira Tashlitsky)
Musically, the production was woven with intermittent use of silence, resonating acoustic scores and Piaf’s classics. Likewise entertaining a combination of choreographic elements, the show included a multitude of group sequences along with simultaneous duets and the occasional contemporary pas de deux. The choreography also comprised of a lot of floor work and little pointe work. The ensemble took advantage of the entire range of the stage, utilizing the open space that represented Piaf’s public front. Along with a great deal of ground work, the troupe utilized the stage furniture as platforms to dance upon, around and even move in a disorienting display of inner strife.  As unpredictable as the musical sequence, the movement was characterized by an erratic, exhausting desperation. While the staccato choreography appeared to try to reflect Piaf’s velvety vibrato style of chanson, it seemed to lack the syrupy flow and sultry enchantment that so characterizes Piaf’s alto cadence.  The choreography evoked the jarring passion and feisty nature associated with Piaf, and while it had pockets of wit, it seemed to lack the hopeful defiance she endured and instilled in others. Scenes unfolded portraying her sundry lovers, lusty bedroom scenes, various automobile accident, fits of drug and alcohol abuse, and finally, her ultimate demise. The piece also highlighted the dichotomy of her simultaneously existence as a symbol of superhuman stardom and a vulnerable individual. The choreography succeeded in hammering home the suffering behind her art and her stretching thin as an object that everyone wanted a piece of. The show ends with Piaf drowning from the weight of the world in a freestanding bathtub.
(Gennady Tashlitsky)
The initially enthusiastic audience seemed nonplussed by the end of show, perhaps as the romantic tragedy was not a lyrical interpretation of Piaf’s best hits soundtrack, but rather painted a picture through a noir lense instead of ‘La Vie en Rose’-tinted glasses. The Israel Ballet will perform its final showing of 'Piaf' in Haifa on June 11 at 9 p.m.