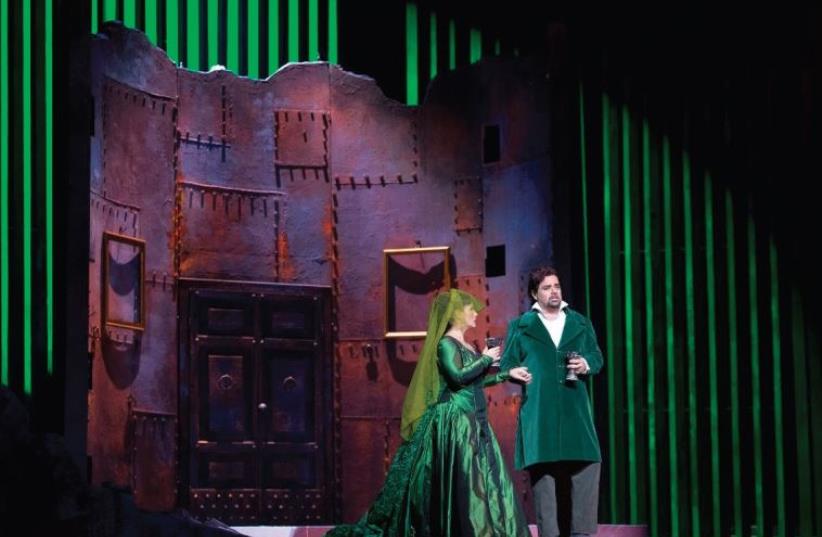 'Opera is awash with elements, and it is something very lavish and grandiose, as are opera houses,’ says Rovner
(photo credit: Courtesy)
Advertisement
By any standards the Israel Opera’s upcoming 2016/17 season is a feast for ears and eyes. It includes seven operas on the main stage, three opera festivals around the country, 10 dance companies, four music series, children’s series and something new – stage circus.That circus acts on the stage – great for the kids – and there’s three such, from Canada (November 2016), Hungary (February 2017) and Africa (August 2017).Israel Opera music director Daniel Oren “has just been signed to a new three-year contract,” said Israel Opera (IO) general director Hannah Munitz at Monday’s press conference, adding that the new season has been dubbed “Viva Italia” in tribute to the birthplace of grand opera.Oren will conduct Bellini’s Norma (November 2016), Verdi’s Force of Destiny (May 2017) and Puccini’s immortal Madama Butterfly (July 2017) on the main stage and at the Timna Opera Festival (more on that later), Samson and Delilah by Saint-Saens, and Verdi’s Masked Ball (September 2017) Let’s start with the sumptuous Butterfly, the heartrending story of geisha Cio Cio San (Annemarie Kremer) and her heedless American lover Pinkerton, sung by Polish tenor Jacek Laszckowski. The Olivier award winning production was directed by the late Anthony Minghella (1954-2008). Norma is the story of a priestess caught between love and loyalty and she’s sung by soprano Maria Pia Piscitelli who sang Lady Macbeth this past season. Love, hate, revenge and destruction drive Forza, in which Ionut Pascu returns to sing Don Carlo.Other Italian opera include Donizetti’s Lucia di Lammermoor (January 2017) with very much up-and-coming Russian soprano Ekaterina Barkanova in the title role, and making its Israeli debut, Rossini’s rollicking La Gazetta about the many and strange faces of love.Currently blazing brilliantly on the podium in Europe’s opera houses, our own Dan Ettinger will conduct Gounod’s Faust (March 2017), an innovative production designed and directed by the startling Stefano Poda.This year the Masada Opera Festival is moving to the magnificent Pillars of Solomon at Timna near Eilat “for financial and logistical reasons,” explains Munitz, adding that mounting productions at Masada costs some NIS 30 million. This sum isn’t included in the IO’s NIS 100 million or so annual budget, “only 28 percent of which is publicly funded,” Munitz points out. “The rest comes from ticket sales and donations. It’s tough but we do it.”The other opera festivals are Verdi’s Nabucco (June 2017) at Sultan’s Pool in Jerusalem and at Acre’s crusader fortress for Orfeo and Eurydice by Gluck – “We try to match content to venue,” explains Munitz, so Samson and Delilah is an apt choice for Timna while Masked Ball fits in with Viva Italia.For children Nitza Shaul returns with another season of Magical Sounds, not to mention the IO’s six hour-long opera condensations for kids, such as Mozart’s The Magic Flute. Additionally IO teams go to schools all over the country introducing kids to opera and for the past 18 months IO personnel have been teaching kids at an Arab-Jewish school in Jaffa how to sing opera. They love it! Dance at the opera house includes the return of the Boris Eifman company (October 2016) with Red Cinderella and Up & Down; the Bejart Ballet Lausanne with his signature Bolero (October 2016); China’s Wang Yabin Dance Company’s local debut with The Moon Opera (June 2017); Philippe Genty returning with his magical company in Internal Dreams (June 2017); and the rambunctious Bale de Rua from Brazil and the Kibbutz Contemporary Dance Company with two programs (October 2016).Music is divided into symphonic, liturgical, jazz and Saturday morning opera highlights, pages of it, including performances by jazz greats such as Israel’s Omer Avital and the Kyle Eastwood quintets, the Latvian State Choir singing Verdi’s requiem and Ettinger conducting Strauss and Mozart.Finally and sadly, Munitz, the IO’s skipper for the past 21 years, announced her retirement. But not to worry: the lady and her people have built to last – she stresses that – and the Opera is here to stay.