How much does the art that we like say about who we are? 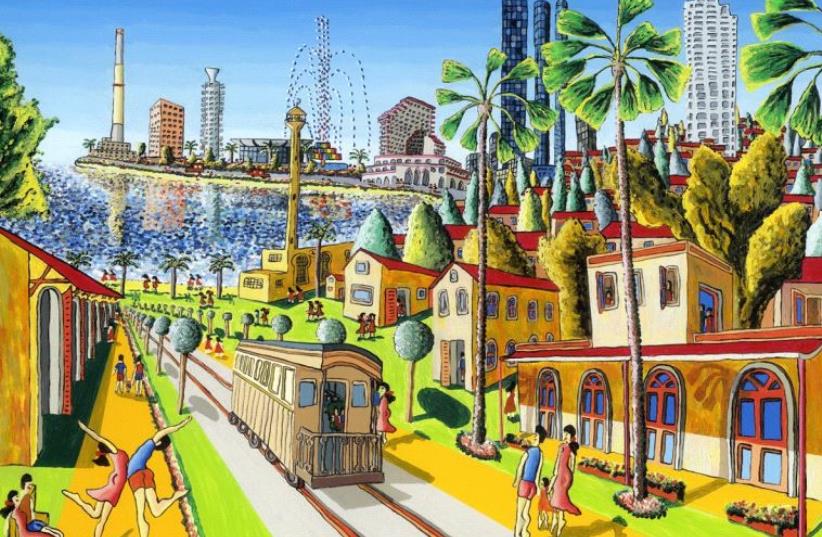 Raffi Peretz, Lover's at Jaffa's Old Rail Station
(photo credit: RAFFI PERETZ)
Advertisement
An Indian guru, muttering incomprehensible syllables, puffing and groaning - not truly interacting with his environment – he is simply present. This was depicted in Ze'ev Revac’s film “Gonev Miganav Patoor” (1977), and the guru was none other than an Israeli artist, Menashe Kadishman, whose other silent works could portray powerful messages without words.Kadishman is part of an illustrious group of artists who have given this place a special name. Since the time little Israel has been standing on her feet, and in fact even earlier – you could find the woven lines of artistry across the soil of the Holy Land. The smells of spices in ancient Jerusalem, flocks of livestock in the Galilee, the shuk vendors in Jaffa, preachers in Tiberius – everyone was a part of the mosaic that served as the foundation for the infrastructure of authentic Israeli art, which today presents an alternative to galleries in New York and Paris without batting an eye.To ignite some desire within you, and to teach you a little about the relationship between art and feelings - we have reviewed for you the trends and the people behind this development, from the very beginning until today. But before that, let us say a few words about the impact of art on our lives, and on our individuality.Art as something which will make us better people?Art is a part of everyday life. But how much does the art that we like - the art that with which we decorate our houses, use as jewelry or choose to adorn even our computer screensavers with - say about who we are?According to studies on art and personality, there is an obvious relationship between taste in art and creativity, intellectual curiosity and imagination - all significant traits of one’s personality. This relationship is manifested in the types of art we like. If we like Gustav Klimt’s “The Kiss”, for example, both for the idea behind it and the heavy colors in the painting, we may be considered more romantic, idealist and passionate. On the other hand, if we like Andy Warhol’s Campbell’s Soup Screenprints, our tastes veer toward a more modern and sharp aesthetic, possibly insinuating that you have an outgoing personality but a critical, forward-thinking eye.Now, let us review which Israeli art can work for you, and what are its origins.Trends in Israeli artIsraeli art was officially born in 1906, with the founding of the Bezalel Art School, which operates until today in Jerusalem. 110 years later and Israeli art is blooming, it has received international acclaim and attention, and has itself undergone many upheavals and changes in style. Here are some stylistic milestones which govern Israeli art: 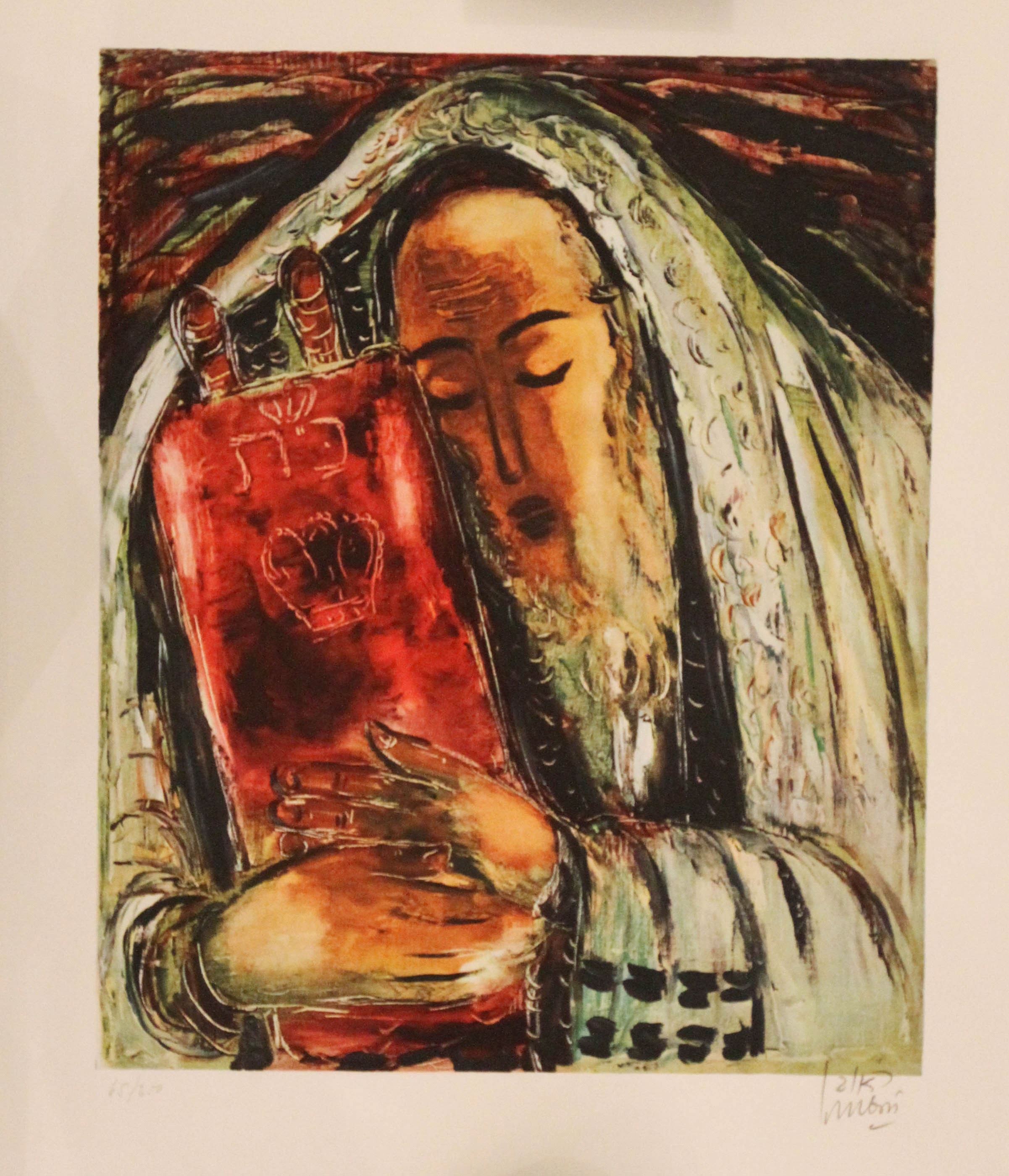 Reuven Rubin, The RabbiPioneers of Israeli art - Where did the magic come from?The pioneers of Israeli art were mainly immigrants who came to Israel out of a Zionistic sense of mission.  In the case of Abel Pann, he was specially invited to manage the Bezalel Art School and decided to stay in the country. During this period, artists were greatly influenced by the primitivism movement which dominated Europe. Important artists and innovators such as Paul Gauguin, Henri Matisse and Picasso were fascinated by foreign cultures and painted exotic landscapes and figures. Like Gauguin and Matisse, Gutman and Rubin were enchanted by Israel’s exotic and unique views, full of light and color. They often ventured into nature to paint the Israeli landscape - Gutman particularly in Tel Aviv, and Rubin in Jerusalem and the Galilee. Their painting style can be characterized as childlike, primitive, full of color and light. Pann, meanwhile, was fascinated by the Israeli characters of the time – dark skinned people in authentic dress. When he made aliya to Israel and began to manage Bezalel, he began a new series which translated the Bible stories and their characters into the sights of modern-day Israel. 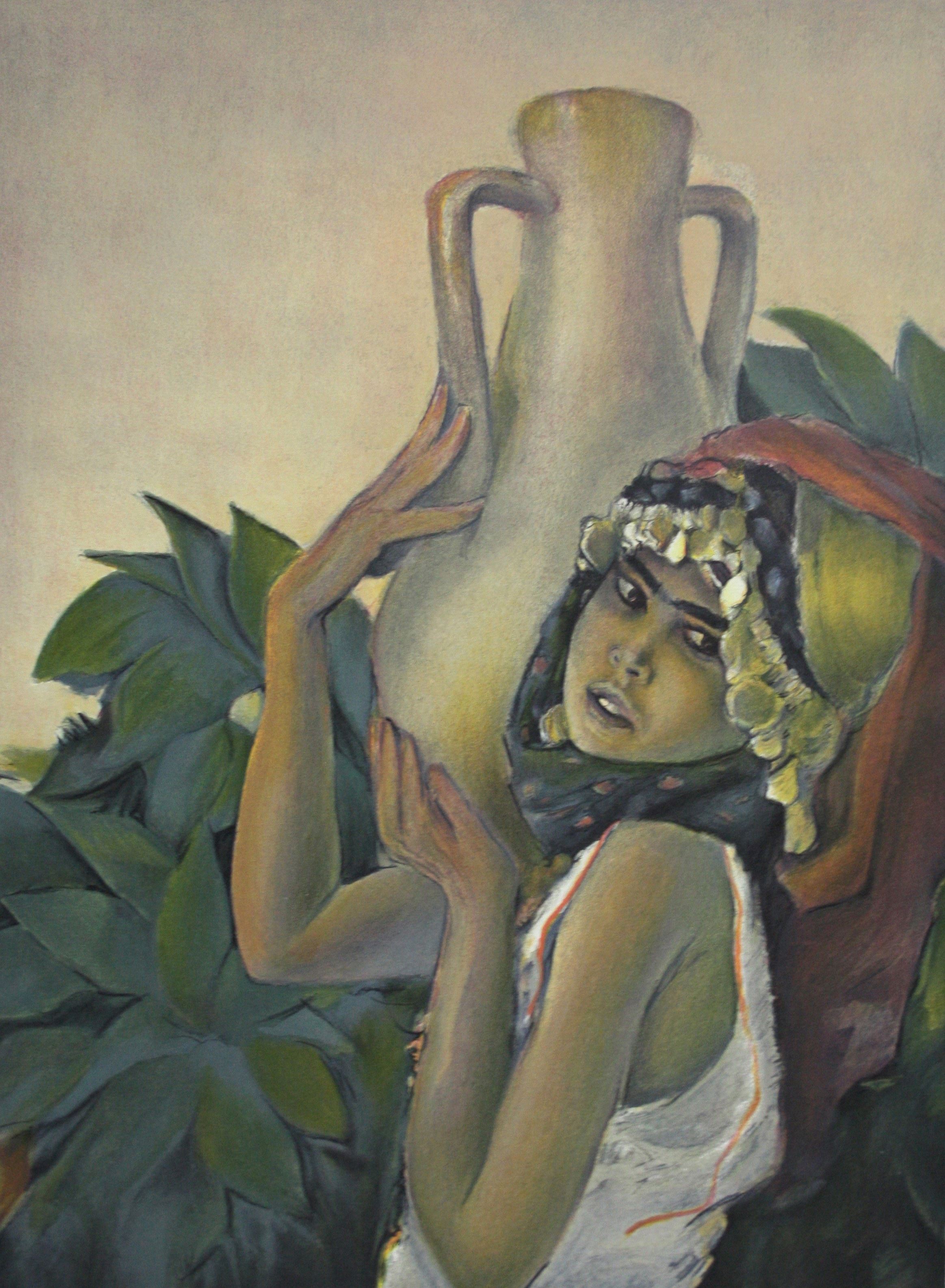 Abel Pann, Rebecca's PitcherSixties and seventies: Breakthrough of Western artThe generation that came after Gutman and Rubin wanted to rebel against the previous tradition, which they thought of as outdated and too political. They turned their gaze toward the innovative art dominating Europe at the time - abstract art. Artists like Yehezkel Streichman, Avigdor Stematsky, Yaacov Agam, Uri Lifschitz and Lea Nikel began experimenting in abstract or semi-abstract art, but even in this there were distinct Israeli characteristics – airy shades of blue and yellow, an abstract interpretation of the Israeli landscape full of light and Israeli vegetation (cacti, olive trees etc.). These artists sought to express their personal and emotional voices through abstract art.

Raffi Peretz, Noon at Rothschild BoulevardContemporary art: Bold colors and new techniquesContemporary Israeli art is characterized by a variety of techniques and approaches, as befits the contemporary art world, which is becoming more and more global. Take Rafi Peretz, for example, a naive artist who makes gestures to the Israeli greats, such as Gutman and Rubin. Peretz is a Tel Aviv artist in every sense of the word -  painting the urban landscape of the city with a lot of varied bright colors and infused with happiness. David Gerstein, meanwhile, is a pop-art artist who has developed his own technique of turning three-dimensional sculptures into flat objects, allowing you to hang his pieces on the wall.Where can I witness the wonder?The Jerusalem Post is proud to present an impressive collection of the trends and artists mentioned here, and much more, on the website of Jerusalem Post ART, where you can buy exclusive pieces matched to your home or personality - and receive them in the manner of your choosing, straight to your door.Enter the website now and choose the piece of art that will change your presence of mind: http://art.jpost.com