The project will take a digital representation of human laughter and beam it up to space, where it will be created on a specially designed 3D printer that works in zero gravity. 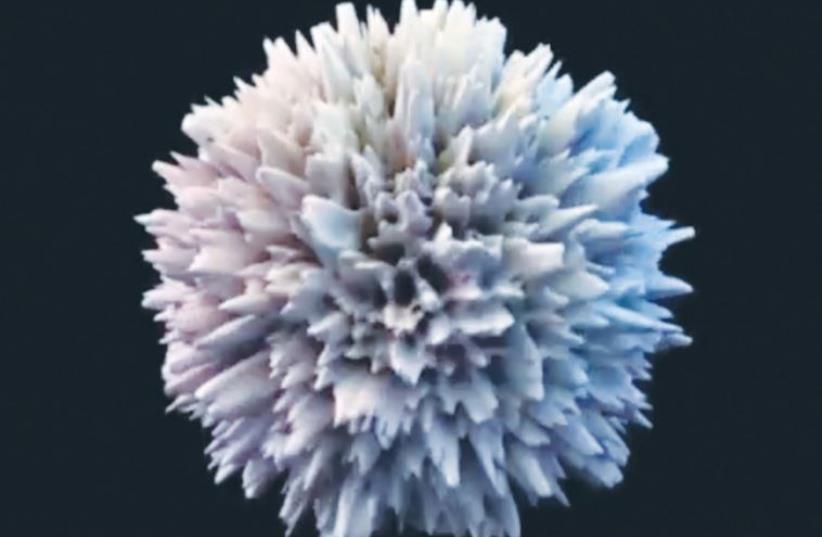 ISRAELI CONCEPT ARTIST Eyal Gever has created this digital representation of human laughter to be beamed up to space as part of a joint project with NASA called #Laugh.
(photo credit: Courtesy)
Advertisement
In space, nobody can hear you scream, but in 2016 they will be able to see you laugh.Israeli concept artist Eyal Gever is working with NASA on a project called #Laugh, which will be the first art piece created in space.
The project will take a digital representation of human laughter and beam it up to space, where it will be created on a specially designed 3D printer that works in zero gravity, made by US-based firm Made in Space. The company was created in 2010 “with the idea that people should be living in space now,” according to its CTO Jason Dunn.The project, Gever said at the IMTM tourist conference on Wednesday, is part of a wider effort by NASA to use 3D printing to help create a more self-sustaining environment for astronauts in space.Instead of launching hardware or parts from earth, they would be able to simply upload and 3D print them.“One of the areas that we are excited a lot about is art and how we can design new types of art that maybe we can’t even bring back to earth, because we’re building a sculpture that wouldn’t even survive in gravity,” said Dunn in a video promoting the project.The concept of creating a sculpture representing laughter, Gever said, was an attempt to showcase something fundamentally human that is absent in space, where sound cannot travel.“I realized, you know, maybe I shouldn’t even think about using a person or a certain language that has a political connotation or culture or time or race, and then a friend of mine said, ‘Why don’t you do a human laughter?’” he said.The project will also have a crowdsourcing element. People around the world will be invited to record and submit their laughter online, and then vote on which clip should be represented in the sculpture.The project is somewhat reminiscent of the NASA voyager Golden Records in 1977, cultural artifacts sent into space that included sounds and scenes from earth, which other advanced societies could potentially interpret. The spectrograph of the laugh, says Gever, could be read and recreated into sound in the future.Gever’s other work revolves around realistic digital representations, some of which he prints in 3D for effect. Among them: a video of a watery dancer with a constant stream shimmying off its body, a square of uber-realistic ocean surface, and a waterfall 3D printed in a surreal shiny plastic.According to Gever, the project, which will be featured in a VICE documentary, will come to fruition at some point in 2016.
Advertisement
Subscribe for our daily newsletter