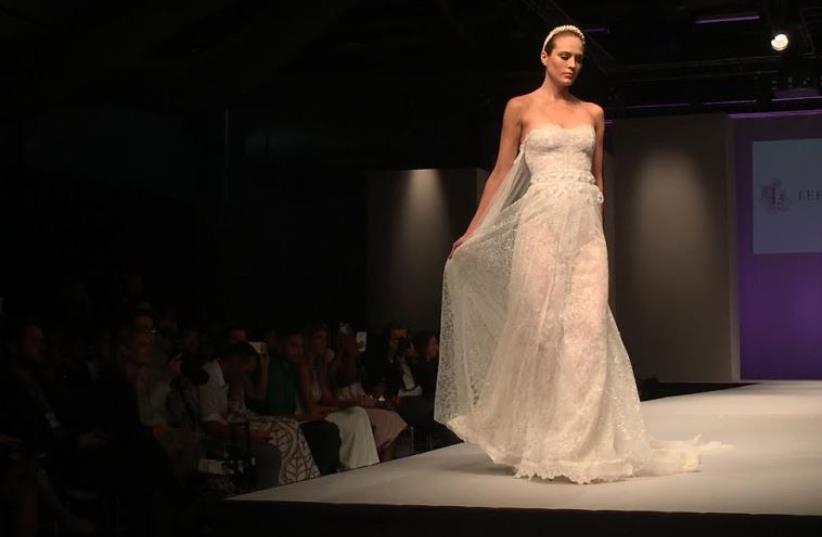 Wedding dress at NYC Bridal Show
(photo credit: DANIELLE ZIRI)
Advertisement
Hundreds of bridal gown designers from all over the world gathered inside the hangar at Pier 94 in Manhattan this weekend for New York International Bridal Week.Getting attention from buyers and clients is not easy in such a competitive setting, but for seven up-and-coming Israeli designers who got to show their dresses in a special show, it seemed to be a piece of wedding cake.The show highlighting Israel was organized by the Ministry of Economy’s Trade Mission in New York, the Israeli Foreign and Tourism ministries.Merav Solo, who has been designing wedding gowns for 21 years, told The Jerusalem Post it was her first time sending her creations down a runway in the big city.“This moment is so new for me,” she said, “I feel good, I feel like I am now ready for this.”“I am not here just for a good experience, I’m here to really succeed and pass on my designs to more people all over,” Solo added.Even though her studio has been based in Haifa for over two decades, Solo feels Israel is “very small” and aspires to see her dresses worn by women of different backgrounds across the world.“When I build a collection, I always want to build it for a variety of brides,” she told the Post, “There are very few brides that I couldn’t design for.”Her brand, Solomerav, has been worn by brides with various cultural backgrounds over the years. A significant part of Solo’s clientele is also made up of Arab women. 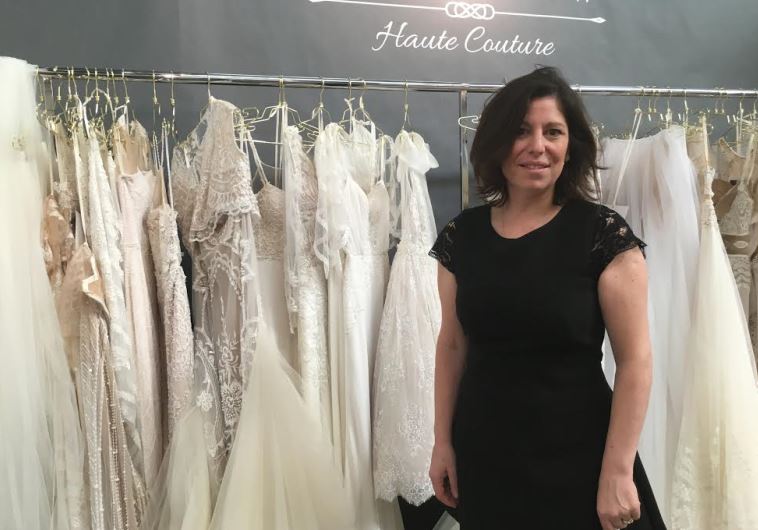 (Photo: Merav Solo)
“It has become a real relationship that I have with them,” she said. “It started with one wedding, and then there was another one and they keep sending me people.”“They are wonderful women, very pleasant to be around and they really appreciate my work,” Solo said.“From the beginning, they felt it was more than a dress, we made a connection, and that felt really good.”Solo said that from her experience, Jewish Israeli brides and Muslim Arab brides look for the exact same thing in a dress: to feel beautiful.“We are all the exact same people,” she said.For Solo, New York is only the beginning, she describes herself as an ambitious person, always looking for a new goal.“I am never just content. I always want more. I always think forward,” she said. “My dream is to have a fashion show that is just mine, with a collection that I build from A to Z, where I decide what comes first and what comes second.”“And I want to do it here in New York,” she added, “New York is the center of the world, everything comes from here.“ New York International Bridal Week is considered one of the leading commercial events in the American wedding market, which generates revenue estimated at over $54 billion a year. Seven percent of this amount is spent on bridal gowns.Beyond the seven Israeli designers participating in the show, 14 others had booths at this year’s event.“This testifies to the exceptional talent in Israel,” Israel’s Economic Minister to North America Nili Shalev said, “Israeli designers have become popular among American clients due to their innovative thinking and daring designs.”According to Yoav Davis, a branding consultant for one of the featured designers, the strength of Israeli designers lies in their willingness to dare.“They are risk takers.” he told the Post, “They can really go the extra mile with doing whatever it is they want to do and just really be kind of extreme.Davis explained that Israel being a small country, designers often have to find creative ways to stand out in order to find their place in the market whereas European or American designers can afford a more classic and reserved approach.“They become so competitive and aggressive,” Davis said, “Some people could be intimidated, but some could be fascinated by it.”“Obviously it’s been working,” Davis added, “They know how to sell and convince and get someone to fall in love with their merchandise. It’s something that Israelis really have in their DNA.”The Israeli gowns themselves seemed to have common traits differentiating them from those of other international brands.The use of small shiny beads and crystals was predominant in the Israeli wedding dresses displayed. They had a vintage feel, sometimes even a bit of 1920’s inspiration, which seemed to catch the eye of several buyers.The Israeli Tourism Ministry’s North America Mission announced it would host seven leading fashion journalists at the Holon Fashion Week in November, to attract more US media attention to Israeli fashion. Among those invited are journalists from the popular fashion magazines Elle, Glamour and Latina, and some leading fashion bloggers.
Advertisement
Subscribe for our daily newsletter