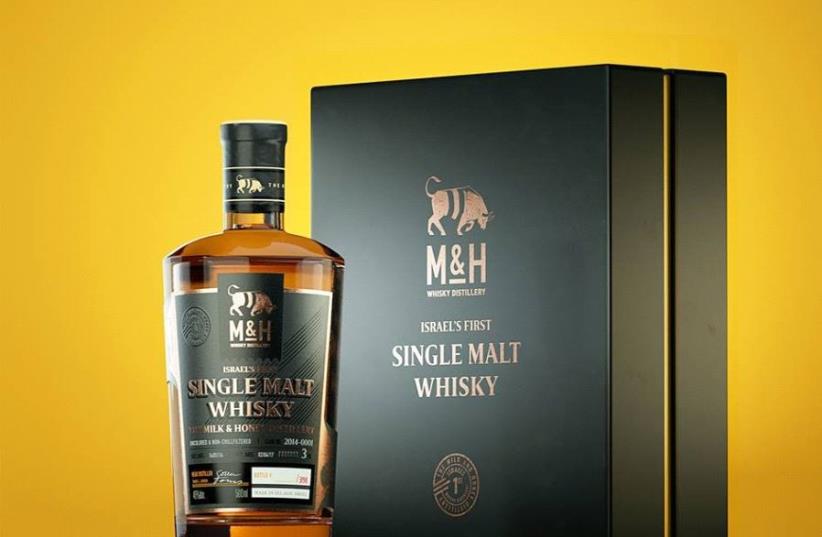 Israeli distillery unveils first-ever malt whisky
(photo credit: THE MILK & HONEY DISTILLERY)
Advertisement
On World Whisky Day earlier this week Israel's Milk & Honey (M&H) distillery launched the country's first-ever malt whisky. M&H has bottled the first cask in its experimental series, an integral component of the formulation of the final product, which is now in production at the distillery. The initial sales of the distillery's first 391 bottles of single malt whisky will go on sale later in June.Israel's first single malt whisky by Tel Aviv's Milk & Honey Distillery is the first whisky to be produced and bottled in Israel after being aged in cask for minimum three years. It therefore complies with the definition of whisky in Scotland. The special Israeli whisky is well matured, thanks to the warm Israeli climate.The distillation of this historical holy land whisky began at the distillery's early stages - even before it moved to its distillery in south Tel Aviv, before the current industrial equipment was purchased, and before the successful crowdfunding campaign on Indiegogo. The barrel was distilled in January 2014 in a warehouse in the Northern Sharon region, by head distiller Tomer Goren, together with internationally renowned master distiller, the late Dr. Jim Swan, as part of his role as consultant to the distillery at the time.The liquid was aged for 31 months in a 225-liter virgin American oak cask and then for another seven months in an ex-bourbon cask matured at the distillery's cask room in Tel Aviv.The first bottles of Israeli single malt whisky will go on sale to the public in June, distributed by Hacarem at selected stores throughout Israel. Sales of the first bottles in the special edition (numbers 1-100) will begin on July 7, 2017 for 10 days through a special international online auction.