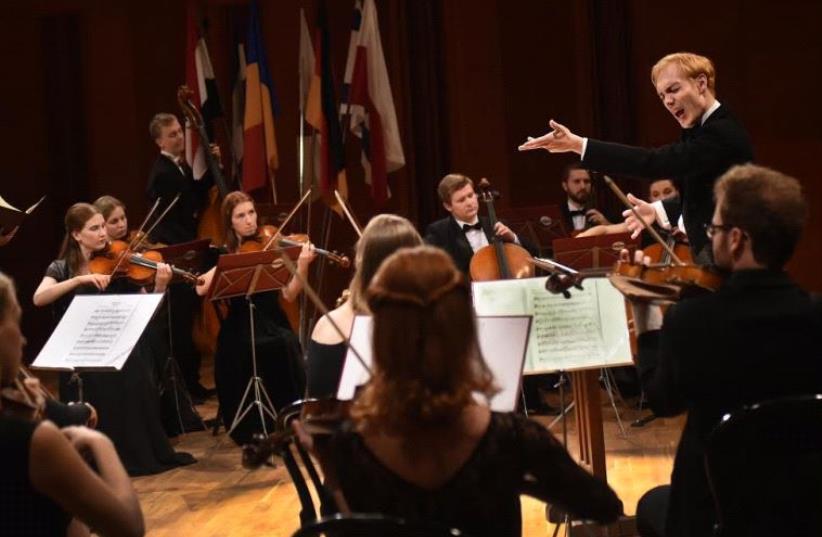 Actor Rafael Stachowiak conducting in Poland
(photo credit: IRIS NESHER)
Advertisement
Israeli films are the talk of the festival circuit, receiving critical acclaim and finding international distributors at the Venice, Toronto and Telluride international film festivals. Avi Nesher’s Past Life, a wonderful and original film about sisters who confront family secrets, had its official world premiere at the Toronto International Film Festival yesterday. It got a rave review from Alissa Simon in Variety, who called it “profoundly moving . . . hauntingly beautiful” and praised its “gripping screenplay” and “outstanding acting.” Past Life, she said, is Nesher’s “best film yet.”Joseph Cedar’s Norman: The Moderate Rise and Tragic Fall of a New York Fixer, which stars Richard Gere, has also gotten good reviews at Toronto and Telluride. Todd McCarthy, writing in The Hollywood Reporter, said it was “compellingly unsettling” and a “complex and intricately detailed portrait of the web of political, financial, social and religious affiliations that has everything to do with how the world works.” Variety named Gere a Best Actor contender for his performance. The movie will be distributed by Sony Pictures Classics. Maysaloun Hamoud’s In Between, about three Muslim women living in Tel Aviv, was shown at the Toronto International Film Festival and was acquired for distribution by the Paris-based Alma Films. Sarah Ward, in ScreenDaily, called it, “elegant, sensitive, yet still assured debut effort.”Elite Zexer’s Sand Storm, about a Bedouin family, which is showing at Toronto, was called “an insightful directorial debut” by Kimber Myers in The Playlist. Sand Storm, which won the Grand Jury Prize for World Cinema Dramatic at the Sundance Film Festival in January, opens this week in Israel and will be distributed abroad by Beta Cinema. Rama Burstein’s Through the Wall, which was shown at the Venice International Film Festival and the Telluride Film Festival, was called it an “enjoyable” film by The Hollywood Reporter, which said it “should prove just as popular abroad as the director’s debut film,” Fill the Void. Both films are about women in the ultra-Orthodox community. Through the Wall, a comedy, is being distributed by The Match Factory abroad and will open in Israel in October. Emil Ben-Shimon’s The Women’s Balcony, which is playing at Toronto, was called an “upbeat, crowd-pleasing film” by ScreenDaily. It tells the story of women who rebel against the men in their synagogue, and will open in Israel this fall.