Donizetti’s opera L’Elisir d’Amore (“The Elixir of Love”), performed by the Israeli Opera at Sultan’s Pool in Jerusalem, was, above all, an Event. 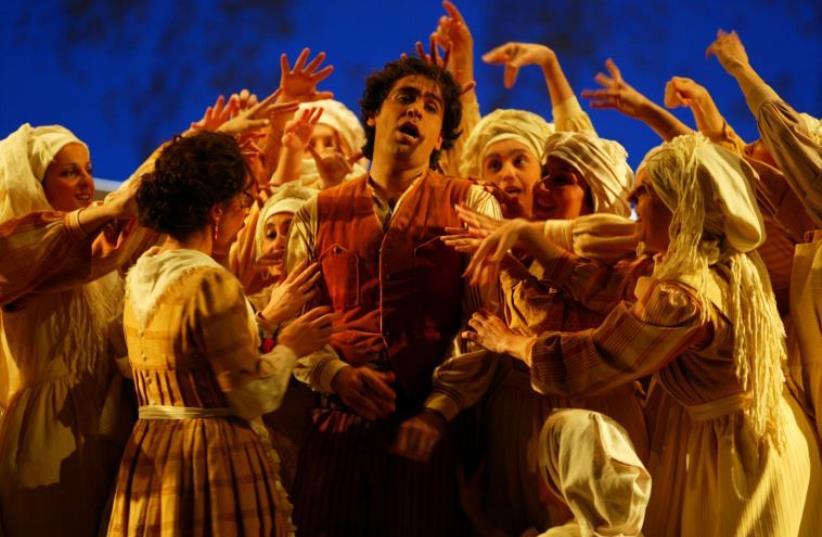 Spanish Tenor Ismael Jordi interprets Nemorino during the rehearsal of the Gaetano Donizetti's opera 'The Elixir of Love'
(photo credit: REUTERS)
Advertisement
Donizetti’s opera L’Elisir d’Amore (“The Elixir of Love”), performed by the Israeli Opera at Sultan’s Pool in Jerusalem, was, above all, an Event.The environment required some getting used to. That the imposing (and much-advertised) walls of the Old City did not overshadow the performance was simply due to the fact that it took place at night; they remained invisible. The stage was far removed from the audience, even from the front rows, so that the actors and actions could be seen only in miniature.Video screens presented only partial segments of the stage.The Jerusalem Symphony Orchestra and the Israeli Opera Chorus, conducted by Francesco Ciluffo, sounded at first as though trapped in a can due to the electronic amplification. When one finally became used to the unfamiliar sound, one could appreciate their lively and energetic rendition. Omri Nitzan’s direction and sets were as original and inspired as they had been 18 years ago, especially when the sunflowers became drunk together with Nemorino, and Gadi Schechter’s addition of a hyperactive sky was mildly amusing.The performance’s highest level was achieved by the singers. As Adina, Alla Vasilevitsky enchanted with her clear, pure and easily flexible soprano. Alexei Dolgov’s soft and heartrendingly impressive lyric tenor, as Nemorino, made one wonder why Adina had not fallen in love with him sooneer – but then there would have been no opera.His aria Una furtiva lagrima (“One furtive tear”) was one of the performance’s highlights. In the role of Dulcamara, Vladimir Braun emerged as a veritable comic talent. Ricardo Novaro was an appropriately arrogant Belcore, though his baritone was sometimes too unsteady for comfort.One wold like to hear these excellent singers in the opera house, where they belong, so that one could enjoy their natural, unamplified voices.