Israeli students get a taste of the blues

“Israel is diverse with all kinds of different people lots of minorities.” 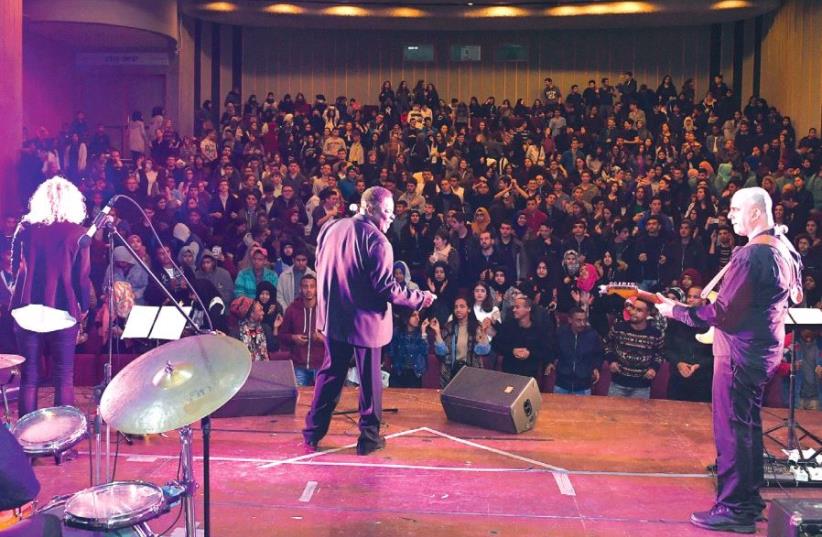 ROY YOUNG and his band play for Arab and Jewish students at the Lod Cultural Center on Thursday
(photo credit: MATTY STERN, US EMBASSY TEL AVIV)
Advertisement
‘The bluuueess with a feeling is what I have today,” singer Roy Young crooned to a crowd of 500 Jewish and Arab high school students, who cheered with an energy usually reserved for their favorite musicians.“I love him!” one girl yelled at Thursday’s event, held at the Lod Cultural Center and organized by the US Embassy as part of the legation’s celebration of Black History Month. The concert was meant “to demonstrate the deep connection between African-American music and the struggle for equal rights, as illustrated during the Civil Rights Movement in the 1960s in the United States,” according to an embassy press release.“One of our top goals is promoting a shared society, and one of the ways to do that is through music. The challenge as always is how do you engage the students,” remarked cultural attaché Jonathan Berger.“They will be sitting side by side, but will they engage each other? You want to push kids out of their shells. I hope we can crack their shells.”In between singing along to Bob Marley’s famous tune “No Woman, No Cry,” Basma, a 16-year-old student at Amal Taiba High School, said this was her first time at a mixed Jewish-Arab concert. “It’s pretty unusual,” she said.The students were brought in from schools around the country representing a wide cross-section of society. This was apparent as introductions were made in Arabic, Amharic, Hebrew and Russian.“The event was great,” said Ben, an 11th-grade student at Yitzhak Rabin High School. “We learned a lot about American culture and met a lot of people from Israeli culture – Jews and Arabs. I think we can live together just like they did.”When not singing classic blues songs, Young and his band would periodically deviate into history lessons on the African- American civil rights struggle or shimmy from side to side. Despite being Jamaican- born and raised in England, Roy sings with a deep guttural voice as if he were plucked from a smoke-filled New Orleans jazz club.“Israel is diverse with all kinds of different people lots of minorities,” said Young, who now lives in Ramat Gan, referring to his adoring teenage fans. “Black History Month relates to everybody here – Arab, Jewish, white, black. Everyone has a connection.”