Commemorating Omer Sayag, a gifted Lego builder who died of cancer before reaching the age of nine, the tower will be built in Rabin square in Tel Aviv and reach the height of 36 meters.

By HAGAY HACOHEN
DECEMBER 23, 2017 18:21
Omer Sayag with his Lego built model of the Taj Mahal
(photo credit: Courtesy)
Advertisement
Between December 25-27 people walking around Rabin Square in Tel Aviv will witness a powerful scene as volunteers, adults and children alike, will attempt to break the world record and build a 36-meter (118 ft.) tower made up of children's toy building blocks.The tower, made up of half a million blocks and weighing a ton, is to be named 'Omer Tower' to honor the late Omer Sayag. Sayag was a child suffering with cancer. Due to his weak immune system he was unable to meet friends or go outside and so he began to channel his creative energies into building complex and beautiful Lego constructions. Hi most ambitious project was a replica of the Taj Mahal, which he donated to the 2014 Lego exhibition. Sayag was much loved and missed by his kindergarten teachers, Ben Klinger and Shirley Bardugo, who began thinking of how they could honor their student's memory. They contacted the Israeli educational group "Young Engineers" to find a special way to commemorate Omer. Young Engineers focuses on teaching science and engineering to children in Israel and around the world. Klinger and Bardugo came up with a plan, to build the highest tower ever built out of toy bricks for Omer, and Young Engineers were happy to help out. Omer Sayag's teachers also reached out to the Tel Aviv municipality and to Israeli celebrities such as international model Bar Refaeli who agreed to be a part of the campaign to build Omer's tower. “We were facing a double challenge, educational and technical. We have been operating in Israel and around the world for a decade, teaching technologically intricate engineering and robotic principles using regular size building bricks models. We have not yet taken part in a project of this scale," The group said in a statement.""The models that our students usually build are small, but in this case - together with the Tel Aviv Municipality - we are building a huge tower, made up of sections built by thousands of children and adults in dozens of centers in Tel Aviv, mentored by our instructors, over the past two years. In addition, we are responsible for combining all of the parts at the event, ensuring that every section is stable in itself and contributes to the whole. On the other hand, we must keep in mind that the shift from small and separate parts to a 36m tower, equivalent to a 12- story building, is the same as constructing a building,” the statement added, 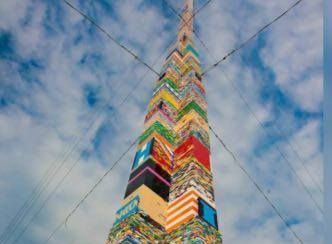 Israelis set to build world's largest toy brick statue in Tel Aviv“There are many technical challenges – ranging from the provision of hundreds of thousands of bricks, precise technical planning, quick but delicately transporting the constructed floors from the study centers to the tower site, three cranes to lift the tower that weighs over one ton, engineering reinforcement, safety engineers accompanying each phase and, most importantly, maximum coordination among all of the players," detailed Young Engineers founder Amir Asor. "Despite the challenges, we are pleased and proud to take part in this important project that found its way into our heart from day one. It reflects a great deal of love and positive memories that everyone can relate with.”The goal is to enter the Guinness World Book of Records, all to honor a suffering child. The previous record is a 35-meter tower built in Milan in 2015.