It takes two to samba. 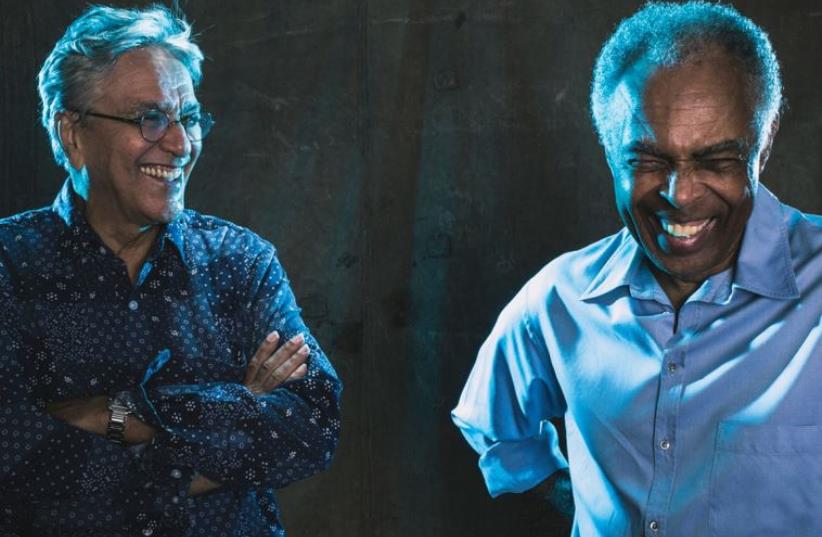 Caetano Veloso (left) and Gilberto Gil
(photo credit: PR)
Advertisement
On Tuesday, fans of Brazilian music will have a rare opportunity to catch two of the undisputed masters of the genre in action at the Menora Mivtahim Arena in Tel Aviv. Caetano Veloso and Gilberto Gil are fully paid-up members of the Brazilian musical pantheon. Over the past half century, they have individually garnered a bunch of Grammys and other awards, put out big-selling albums and performed at prestigious venues and festivals the world over.The upcoming concert has been marketed under the snappy subtitle of Two Friends, One Century of Music, and that is pretty much bang on. The temporal aggregation for the two masters is accurate. The 72-year- old Veloso and 73-year-old Gil started out on their musical paths in the mid- 1960s. And the relationship part of the PR-oriented one liner is also true. Both septuagenarians hail from the Bahia area of Brazil, and they share a commitment to bettering society.The latter propensity got the pair into trouble with the military junta that ruled the roost in Brazil in the late 1960s. It was the social comment content of Veloso’s and Gil’s songs that irked the generals. After a trial, followed by several months in jail, the pair were summarily kicked out of the country. They opted for London. During their two-year sojourn in Europe, Veloso and Gil spread their musical roots and returned to Brazil in 1972, with several more strings to their individual and collective, bows.Gil started to play music as a child and was still a teenager when he joined his first band. He began his career as a bossa nova musician and gradually began to write songs that reflected a focus on political awareness and social activism. He was a key figure in the Tropicalismo musical movement of the 1960s, with Veloso and his sister Maria Bethânia also on board.Once back in Brazil after their British exile, Gil and Veloso picked up where they left off, with interest. While in London, Gil recorded an album in English, and that paved the way for his first US tour. He also incorporated rhythms and colors from Jamaica, Nigeria and various regions of Brazil. Veloso also put out a wide range of sounds, styles and genres over the years, taking in the heady sensibilities of jazz, rock, psychedelia, pop and various ethnic materials in putting together a wide- ranging discography that has brought him a couple of Grammys and many other awards. Despite their success, both Gil and Veloso have maintained their creative trajectories and have periodically joined forces both on stage and in the recording studio. However, with such busy professional and other schedules, it has been more than 20 years since they last worked together. Gil’s commitment to social activism eventually led him to being appointed Brazilian minister of culture in 2003. During his five-year tenure, he did his utmost to spread the national musical word and to ensure that aspiring young Brazilians musicians had the financial wherewithal and facilities to follow their artistic muse.The mutual admiration the musicians have for each other shines through in everything they do.“There was always love and deep friendship with Caetano,” says Gil. “He is a fighter for justice and is a real warrior for peace. He has a special outlook on life.” Veloso is equally enamored with his longtime pal and musical cohort and says that for Gil, rhythm is king.“Gil is one of the great creators who has natural talent and great modesty. Despite all his social activism, I remember that he once said that even with all his desire to improve his understanding of harmony, at the end of the day he wants to hear the drums.”There should be a lot of shaking and grooving at the Menora Mivtahim Arena on Tuesday.

Doors open at 8 p.m. and the show starts at 9 p.m. For tickets and more information: *2207 and www.2207.co.il
Advertisement
Subscribe for our daily newsletter