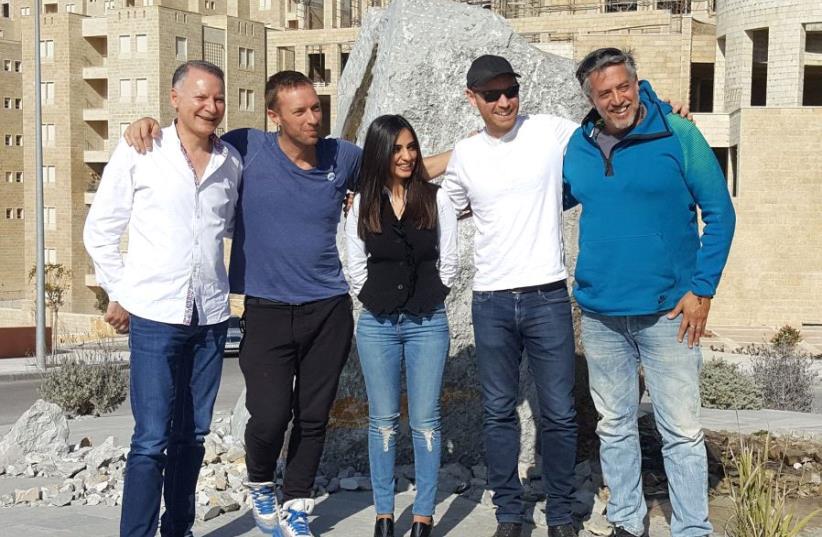 Coldplay arrived in Israel to meet with producers and plan their upcoming tour.
(photo credit: PR)
Advertisement
The prospects of British superstars Coldplay performing in Israel this year grew stronger over the weekend, with the band arriving here to scout out sites with their production team. According to a press release, the entourage was looking at locations in Tel Aviv, Jericho, Rawabi and Jerusalem.Coldplay’s front man Chris Martin, who came to Israel in November on a similar visit, tweeted Friday on the Coldplay account that he and his band mates were “in Israel and Palestine to listen and learn, that’s all.” Martin said Friday that “there is no concert scheduled; we are just having an enlightening trip to learn about the area.”For years, local producers have offered lucrative deals to entice the seven-time Grammy-winning band to rock out in Israel.The band's front-man Chris Martin arrived for the quick trip to the Holy Land in November, sparking rumors of a potential upcoming performance in Israel.The April release of Coldplay's video for it's single "Up&Up" gained local notoriety as it was directed by the Israeli creative duo Vania Heymann and Gal Muggia.Martin has spoken highly of the video, referring to it as "one of the best videos...ever made."