Eighteen is a lucky number for the Jerusalem Jewish Film Festival. 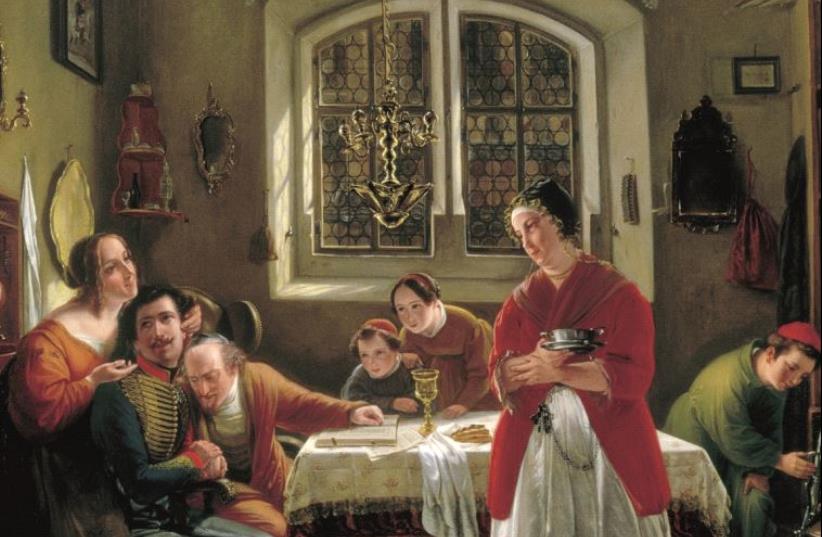 Moritz Daniel Oppenheim - ‘Return’
(photo credit: PR)
Advertisement
It’s the 18th year of the annual Jerusalem Jewish Film Festival, a number that promises luck for movie lovers. The festival, which runs from December 24 to 29 at the Jerusalem Cinematheque, features more than 40 films on Jewish themes, including the latest features from Israel and around the world, documentaries and shorts, programmed by the festival’s artistic director, Daniella Tourgeman-Glass. There will be a number of distinguished guests on hand to discuss their work.The opening-night film is Denial, which tells the story of historian Deborah Lipstadt’s court battle against Holocaust denier David Irving, who sued her for libel in Britain. Directed by Mick Jackson, it stars Rachel Weisz as Lipstadt.Tom Wilkinson and Timothy Spall co-star. Lipstadt will attend the premiere screening and an additional screening on December 25 and will do a Q&A at both events.The closing event of the festival will be a screening of Katharina Waisburd’s Holy Zoo, a documentary about the extraordinary behind-the-scenes story of the Jerusalem Biblical Zoo.The director and the participants in the film will attend the screening.In the Schoumann International Competition, sponsored by Helene Schoumann, which features recent feature films on Jewish themes, two movies will be screened in the presence of the filmmakers: An Israeli Love Story and The Origin of Violence.An Israeli Love Story is veteran Israeli director Dan Wolman’s latest film. Set in 1947, it tells the story of a young woman (Adi Bielski) who dreams of being an actress and falls in love with a kibbutznik (Avraham Aviv Alush) who is in the Palmach. Alush recently starred in The Women’s Balcony as a charismatic but ultra-Conservative rabbi.Élie Chouraqui’s The Origin of Violence is about a teacher who has always had violent outbursts.Visiting a concentration camp, he discovers that his father was an inmate and that his family has hidden its Jewish roots.Also in this category is an adaptation of Nicole Krauss’s The History of Love, directed by Radu Mihaileanu, who made the film Live and Become, about an Israeli family that adopts a boy from Ethiopia. The History of Love tells the story of lovers separated by history and the circuitous route they take back to each other.All the filmmakers will be present in the Israeli Cinema section, a mixture of feature films, documentaries and shorts by local filmmakers. It will feature films on subjects that are very much in the news, among them Levi Zini’s Ultra-Orthodox 3.0, about municipal elections in Beit Shemesh and how haredi Jews relate to politics; and Until the Last Step, Boris Maftsir’s look at the uprisings in the ghettos and shtetls of Eastern Belarus in 1941-2.Ilan Peled and Yair Qedar will discuss their film Yona, which tells the story of Yemenite dancer Yona Tan’ami, who was rejected by the Israeli establishment and crushed by gender discrimination. It is from their Mockumentary biographies project Neelamot (Vanished), on the marginalization and discrimination against women artists in Israel. The festival will be the occasion for the launch of Pablo Utin’s book Lessons in Cinema. It will feature a conversation with Utin and Avi Nesher after a screening of Nesher’s latest movie, Past Life. The film is a fact-based drama about two Israeli sisters in the late 1970s who search for the hidden truth about their father’s wartime experiences. This print will have English subtitles, unlike some of those playing commercially around the country, so this a great opportunity to see the movie if you need an English translation.Special screenings include a first look at Nevsu, a television comedy that will be aired next year about a blended Ashkenazi-Ethiopian family.The screening will be followed by a discussion with the creators of the series.A restored version of Michael Waszynski’s 1937 Yiddish classic The Dybbuk will be shown.Graduates of the second class of the haredi branch of the Ma’aleh School of Television, Film & Arts will present their latest films.In collaboration with the Jewish Funders Network and the Genesis Prize Foundation, the festival will present a program on “Intermarriage through the Prism of Cinema.” The program includes a screening of a restored print of Norman Jewison’s beloved Fiddler on the Roof, where the audience is invited to sing along.Andreas Gruber will attend one of the screenings of his film Hannah’s Sleeping Dogs, about a girl in Austria in the 1960s who discovers she is Jewish. He will be joined in a discussion by Tobias Ebbrecht- Hartmann of the Hebrew University of Jerusalem.Director Manoussos Manoussakis will be present at a screening of his film Cloudy Sunday, about a forbidden love between a Jewish girl and a gentile musician in Nazioccupied Thessaloniki. The screening will include a musical performance.A print of Edward Sloman’s His People, restored by the National Center for Jewish Film, will be shown.It is a silent film about the rebellious younger generation. There will be a lecture beforehand by Prof. Jonathan Sarna, the Joseph H. & Belle R. Braun Professor of American Jewish History, Brandeis University.Argentine director Daniel Burman’s latest film, The Tenth Man, will be shown in this program. It is about a Jewish man who returns to his old neighborhood and meets a woman who changes his perspective on his father and Jewish tradition. There are several more films in this program, as well as a panel discussion in Hebrew on the topic “What Is a Jewish Film?” The Great Minds Section includes Bang! The Burt Berns Story, about a legendary music producer with Mob connections, co-directed by his son, Brett Berns, who will attend the screening; and Isabel Gathof’s Moritz Daniel Oppenheim — The First Jewish Painter, about an artist described as “the painter of the Rothschilds and the Rothschild of the painters,” an icon of Jewish emancipation in 19th-century Germany. Gathof will attend the screening.To get more information — and there are many more films and events not mentioned here — and to order tickets, go to http://jer-cin.org.il.