Saxophonist David Sanchez will play at the Jerusalem Jazz Festival 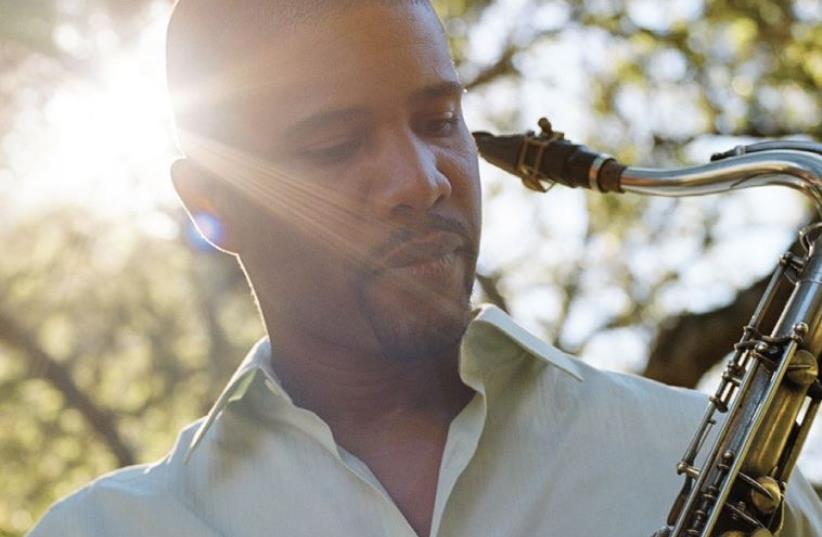 Saxophonist David Sanchez
(photo credit: PR)
Advertisement
David Sanchez is no stranger to these shores and will make his seventh appearance here at next week’s Jerusalem Jazz Festival (December 2 to 4). He first put lips to horn in this part of the world 24 years ago when, as an up-and-coming young saxophonist, the Puerto Rican had the privilege to be part of the United Nation Orchestra led by legendary trumpeter Dizzy Gillespie.Grammy Award winner Sanchez doffs his derby to Gillespie and credits him with helping his artistic development move in the desired direction.“I was blessed to be able to play with Dizzy,” he says. “I came to Israel with him in 1991 and again in 1992, and we did tours together. And later I came to Israel with my own bands. I have always had a good time in Israel, and I am really excited to be going back.”For Sanchez, Gillespie embodied many facets of the art form.“People generally identify him as one of the founding fathers of the bebop era [of modern jazz], but when you look closer at his career you see that he really transcended all of that. He was really looking beyond that, almost to world music. Right in the middle of the bebop era, he was looking at visiting Cuba and Argentina and Brazil. He was also influenced by Middle Eastern music. He had a wide palette of colors in his music, so in that sense he was a big influence on me,” says Sanchez.That stint with Gillespie was a formative and confidence-building experience for Sanchez, and he released his debut album, Departure, in 1995 at the age of 27. It was well received.Although Sanchez has made a name for himself on saxophone – generally on the tenor variety – he took his first steps in the art of creating pleasing sounds on a very different kind of instrument.“I started out on percussion, although I switched to saxophone once I started studying at the performing arts school. But percussion remained a very big influence on my playing. It was always there. My first encounter with music was playing percussion instruments, so it is very special for me,” he recounts.His early training on congas also informs his compositional approach.“It especially affects the way I write bass lines and the way I react to them with the melodies. It is pretty evident where that comes from,” he says.Sanchez acquired a broad educational substratum, which provides the platform for his composing and playing to this day. European classic music was a major feature of his early schooling, if only by default.“There wasn’t much jazz education in Puerto Rica when I was a kid. Now, back there, they introduce jazz earlier in the education system, which is great,” he states, although he does not bemoan the fact that he had to wait a while before he could get to grips with more improvisational ventures.“I was exposed to different kinds of music, different styles and genres. I wasn’t fully aware of the benefits of that back then. But now, when I look back, I see that has helped me to open up to different ways of playing music, and hearing music too,” he explains.That classical musical ingredient is evident in Sanchez’s sizeable oeuvre. To date, he has released 10 albums as leader and has participated in dozens more as sideman, including recordings with the likes of Gillespie and venerated bassist Charlie Haden – particularly, on Coral, which came out in 2004 and landed Sanchez a Grammy in 2005 for Best Large Jazz Ensemble Album. The album was two years in the making and was recorded with The City of Prague Philharmonic Orchestra, along with a jazz sextet.Sanchez’s first orchestral-oriented effort was the 1998 jazz highlights events movies television radio dining release Obsesion.“I really approached that with a kind of chamber music idea, with strings and woodwinds, which had Carlos Franzetti as arranger – he’s a great as composer-arranger. I love that sound of strings and orchestra. I’d love to do another project like Coral, but nowadays it’s a little challenging in terms of logistic and expense,” he says.Sanchez’s confluences with Gillespie and Haden and other members of the previous generation brought him closer to the roots of the music and gave him a firsthand glimpse of how the likes of Miles Davis and John Coltrane went about their pioneering business.“It was great playing with Charlie on Nocturne,” says the saxman. The CD in question brought Haden the 2002 Grammy for Best Latin Jazz Album.“I remember taking long rides with him to gigs. It was probably tiring for him, but it was great for me because I could hear his stories.For instance, of him recording with Trane [John Coltrane], the avant-garde recordings, and telling me stories of how he tried to pick [avant-garde saxophonist] Ornette [Coleman]’s brain. It was great to hear those kinds of things from the source,” he says.But it wasn’t just about the tales of yesteryear.“I learned so much from Charlie;- the way he played the notes and his sensitivity – those round notes and those melodies. He could make you cry with just one note. He was that kind of artist, and I am so happy we connected. It was a very fulfilling experience, and I learned so much from him,” he says.Haden passed away last year at the age of 76, but Sanchez continues to make strides and will put in two performances at the Jerusalem Jazz Festival, on December 3 (9:45 p.m.) and December 4 (1 p.m.).He will bring all his Latin and Afro-Caribbean influences to the stage, which he will share with pianist Edward Simon, drummer E. J. Strickland and bassist Ricardo Figueroa, with Jahn Lee Aponte on percussion. The audiences at each of the shows will be presented with different musical experiences, with one gig featuring Creole- Caribbean material that will be released on Sanchez’s upcoming album, which he hopes to record in February. The other will be what Sanchez calls “a compilation of different stuff I’ve done.” Either way, the patrons should get a good entertainment return for their shekels.

For tickets and more information: www.jerusalemjazzfestival.org.il
Advertisement
Subscribe for our daily newsletter