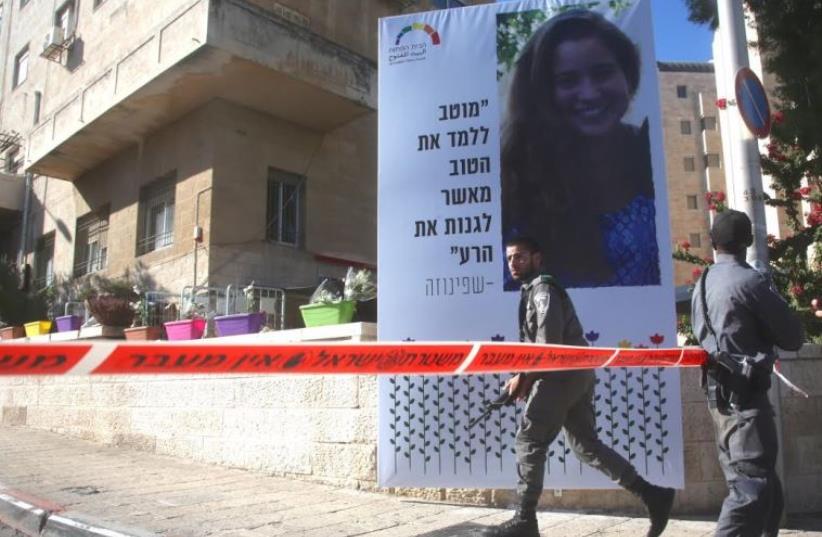 A memorial at the 2016 Jerusalem Pride Parade honoring Shira Banki
(photo credit: MARC ISRAEL SELLEM)
Advertisement
The Jerusalem Symphony Orchestra opens its 2016/2017 concert season with the world première of Holes in Time by 27-yearold Israeli composer Daniel Markovich. It was written in memory of Shira Banki, the 16-year-old girl murdered by a religious fanatic at the 2015 Jerusalem Pride Parade.“The piece was commissioned by the orchestra. Less than a year ago, the JSO composer-in-residence Aviya Kopelman approached me, saying that they had heard my music and liked it and wanted me to compose a piece for the orchestra. I had mixed feelings of happiness and sadness because just a few months had passed since Shira’s murder,” says Markovich. “This is an eight and a half-minute orchestral piece, with the noticeable presence of a harp in the score. I tried to make the piece as melodic as possible. Melody is what I miss a lot nowadays, both for my ear and composing. There is a melody in the piece that really leads the music.”But why melodic? We are talking about a heinous crime.“First of all, melodic does not necessarily mean something nice and sweet. For me, it is a tool to advance the story, to present what is important for me and something to identify with. Second, although it was a violent act, the image of Shira really haunted me during the entire process of composing the piece. I tried to liberate myself from it but failed. It was like an inner voice that constantly sounded in my head,” he says.Kopelman says, “We made a point of commissioning a piece from a young composer to commemorate Shira Banki. We took into consideration several aspects – professional and esthetic ones, since music by Markovich is amazingly beautiful, but also others, such as the orchestra’s appeal to our varied audiences.”Born in central Israel, Markovich played piano from the age of six, later switching to saxophone.“I studied at the Thelma Yellin School of Arts, which allowed me to serve my army term as the IDF orchestra saxophone player,” he says. “Interestingly enough, it was in the army that I got interested in composition. It began with short fragments, and then I realized that I needed to study composition. As a result, I became a composer, writing a programmatic music – that is, music for movies. As a child, I was enchanted by the magic of music in films, which interlaces with the visual and, with it, tells the story. And composing for a symphony orchestra interested me a lot as well. I’m talking about classical, acoustic music for movies. John Williams is the composer who has influenced me the most.”Markovich took a few composition courses at the Rimon School of Jazz and Contemporary Music in Ramat Hasharon, and then continued his education at the Tel Aviv Music Academy.“There, too, I studied composition but dropped it and moved to the Guildhall School of Music and Drama in London. I just wanted to find out what it was like over there,” he recounts. “It was a positive experience. It was different. The education in Israel was good, but it was the same pool of people, the same mentality. Not that the teachers were bad, God forbid, but when you met a new teacher, there was the sense of something familiar.While in London, everything was different, starting with the language and the approach. They really went deep to the roots, especially those of English music. There was a lot of early music.”What did it provide to Markovich as a composer living and creating in the 21 century? “It was mind opening. It shows you that besides our contemporary world and the expressive tools we use now, there are others. You see that people who lived centuries ago expressed the same emotions in a different way, using different music language,” he says.Markovich also spent a semester at the Berklee College of Music in Boston.“That was very special. I met performers and played my music with them,” he says.Markovich returned to Israel two years ago. Since then, he has been composing music for movies, TV, computer games for smartphones, etc.Is there any connection between music for the cinematic “dream factory” and music dedicated to the tragic event that took place here? “Yes, there is. It’s about storytelling. There’s no contradiction between the world of fantasy and the murder that happened in the real world. Just the opposite – I feel there is a connection between the two,” he says.It is not so easy to be a composer in Israel, especially nowadays, so has Markovich ever considered moving to some other, quieter place, where jobs are more plentiful? “No, I feel good here,” he says.“Returning to Israel after my London sortie, I felt such a click. I know that I belonged to this place. As for the job – well, there is always a chance that something will pop up and you can carry on.”The JSO concert program also features Mozart’s Violin Concerto No. 5 and Mahler’s Das Lied von der Erde.Violinist Asi Matathias, mezzosoprano Lena Belkina and tenor Andeka Gorrotxategi will be the soloists. JSO music director Frédéric Chaslin will conduct.The concert takes place on September 8 at 8 p.m. at the Jerusalem Theatre. For reservations: 1-700-704-000 or www.jerusalemtheatre.co.il