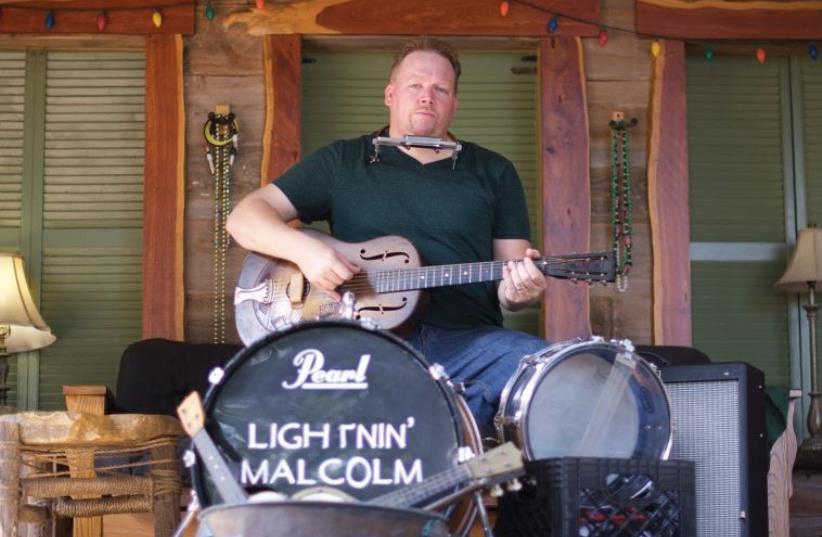 Lightnin’ Malcolm
(photo credit: LORENZO PASCUAL)
Advertisement
Lightnin’ Malcolm wants people to get up and dance when he takes the stage at the Container in Jaffa this evening as part of the Tel Aviv Blues Festival (July 3 to 6). The 41-year-old bluesman says he just likes his audiences to have a good time.“The music I play is really designed for people to dance to. If they’re dancing, I know they’re having fun,” he says.Malcolm certainly has fun doing his thing on stages all over the United States and around the world, feeding off the roots of the music that came into being long before he was born.Mind you, it can help to hail from the right part of the world. The Mississippi-born multi-instrumentalist got into the blues when he was hardly knee high to a microphone stand.“This music got to me just as soon as I heard it,” he says. “I think the first thing I heard was [iconic bluesman] Muddy Waters. That was it for me. I didn’t look no further. I knew that was what I wanted to do with my life. I was probably about 12 years old then.”Before long, Malcolm had picked up a guitar, learned all kinds of blues licks and chords, honed his vocal skills and duly dived headlong into the scene.“I knew I wanted to play because I’d been beating on boxes and stuff, but when I heard Muddy Waters that did it for me,” he recounts.It was a natural connection for the youngster.“To me, the blues is the roots of all music. I don’t really know why everybody doesn’t love the music the way I do,” he laughs. “The deeper I got into it, the more I played the music and got more involved in it, the better it got and the better I felt about it. For me, it was just a natural thing.”The annals of blues music are replete with stories of itinerant musicians traipsing along the dusty highways and byways of the Deep South with little more than the shirt on their back and a guitar slung over one shoulder. It was a solitary lifestyle, which necessitated a single-minded approach. In that vein, Malcolm tends to perform with minimal sideman support, often appearing with just a drummer and sometimes solo.“I became a sort of one-man band – playing guitar, singing, playing a drum or a cymbal with my arm or leg,” says Malcolm. “I still do that a bit.”It is a playing format which, he says, harks back to the origins of the discipline.“I am probably one of the last itinerant blues musicians around. I travel a lot. That enabled me to move around and keep myself alive from my music,” he explains.But it’s not just about keeping the wolves at bay. For Malcolm, it’s all about getting his hands dirty, getting out there and playing the music.“You never learn how to do it if you don’t do it,” he submits, adding that getting out and about to all kinds of blues venues and events also brought him into contact with artists who were as close to the source as you can get.“I was lucky enough to be with some of the old guys who were still playing, and we liked each other a lot. We were not only good musicians, we were also good friends,” he says.Malcolm’s bio includes gigs with a veritable roll call of blues giants from yesteryear, such as T-Model Ford, who died in his 90s a couple of years ago; Chicago blues guitarist and singer Hubert Sumlin; Mississippi born and bred singer and electric guitarist Jessie Mae Hemphill; and R.L. Burnside.Malcolm says he got a lot more from “the older guys” than just getting a handle on some guitar licks.“They taught me a lot about life, hanging about with them. I think they saw something special in me. I think they saw I had the feel for the music. A lot of people can have the technique, but you’ve got to be able to feel the music, too. There’s something deep to this music. It’s not the same as just rolling it out. It’s difficult to find someone to play with, who’s got the rhythm. I can make them sound better, and I want to make them sound better,” he asserts.It can’t be easy, constantly being away from home and giving your all to your audience almost every night of the week, but Malcolm says he wouldn’t trade places with anyone.“I have been blessed and led a unique life, being on the road with guys 40 or 50 years older than me. You learn a lot about the history and the experiences they went through,” he says.Picking up tales of yore from the very people who lived them helped to fire Malcolm’s imagination.“I love to write songs, and some of the things I heard from those older guys come into that, too. You’ve got to keep it real, and simple, so people can understand you and get what it is you’re singing about,” he stresses.Malcolm has been putting himself out there for more than 20 years now. Playing solo is tough enough, but Malcolm has been doing it in places where you have to hit the ground running.“I have played at all kinds of juke joints,” he says. “You’ve got to grab your audience right from the start, or else you’re going to lose them. That’s great experience.”There doesn’t appear to be much chance of Malcolm’s losing his audience in Jaffa tonight.

For tickets and more information about the Tel Aviv Blues Festival: 054- 219-5133 and http://kvish61.org/
Advertisement
Subscribe for our daily newsletter