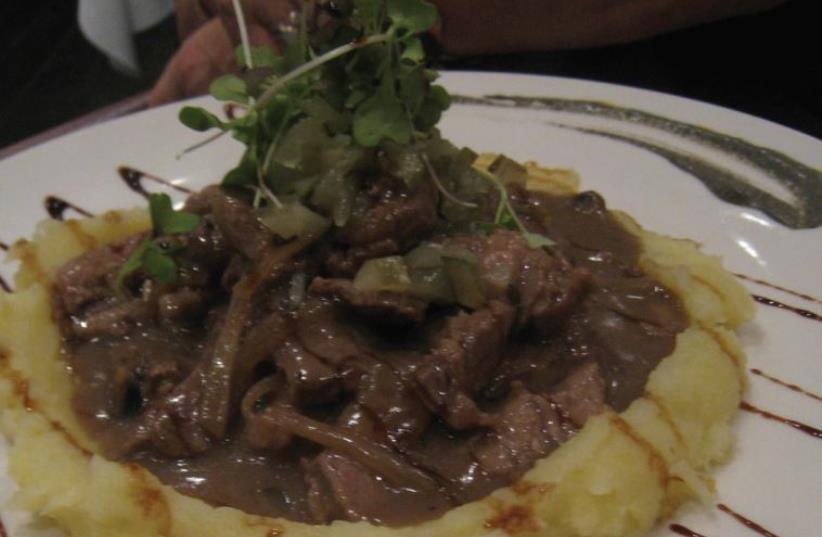 Dizengoff 67.
(photo credit: Courtesy)
Advertisement
All those newly arrived French immigrants who eat kosher will find a familiar ambience at Dizengoff 67, the gourmet restaurant in Netanya that opened recently. It feels French, it looks French, and it would not be out of place in one of those Parisian quartiers where people in the know go for good food in modest surroundings. The décor in these places is usually low key, and the emphasis is on serving dishes that will linger in the memory.Itsik Comaraz, the owner of Dizengoff 67, is no stranger to the restaurant business, having managed and owned several popular local eateries before establishing Dizengoff 67 four months ago.Sergei, the head chef (a former electrical engineer), also gained plenty of experience in some non-kosher restaurants and is enjoying the challenge of producing quality food within the confines of kashrut.Sitting inside the restaurant, although other diners braved the chill outside on the covered patio, we perused the menu and chose our starters. Our charming waitress Yelena (a former economist) brought the usual dips – tehina, aioli and chimichurri – and a basket of crusty fresh slices of a hearty whole wheat loaf. These were a welcome way of allaying the hunger pangs while we waited for our appetizers, which did not take long in arriving. We ordered goose livers on toast with cherry tomato jam (NIS 82) and carpaccio of salmon (NIS 45).Three perfectly cooked grilled livers materialized, served on pieces of toasted bread, together with a small pot of compote made with cherry tomatoes. The jam was a great accompaniment, giving a sugar rush with every meaty mouthful.The carpaccio was also excellent – very thinly sliced pieces of cured salmon, topped with red “caviar” and a subtle lemon dressing.For the main course, I decided to see if Sergei could produce a kosher version of Beef Stroganoff, which, traditionally has cream in the sauce (NIS 98).It looked right, with a rich brown sauce, chunks of tender beef, mushrooms and onions, topped with chopped pickled cucumber and garnished with a slice of carambola (star fruit.) As to whether it tasted authentic I’m in no position to say, but it was delicious which is all that really matters.My dining companion was very happy with his generous portion of grilled lamb chops (NIS 135). Some pureed potatoes and a large glass of Barkan 2013 Cabernet Sauvignon (NIS 35) completed our main course.For dessert, we were offered chocolate mousse, fruit salad and ice cream. It was good to see that no attempts were made to produce desserts that require lashings of synthetic cream, probably one of the most unhealthy foods around.The chocolate mousse was rich and chocolatey – what more could one ask? The fruit salad was very refreshing, with neatly cubed pieces of fresh fruit. Not a piece of canned fruit in sight. All that was needed after such a meal was a glass of mint tea, which duly appeared.We left Dizengoff 67 and stepped into the Netanya night with full stomachs and a strong feeling of bonhomie.The writer was a guest of the restaurant.Dizengoff 67
Kosher
67 Dizengoff Street, Netanya
Tel: (09) 973-6000 Sunday to Thursday, noon until late.
Saturday: One hour after Shabbat.Business lunch: NIS 70. Noon until 5 p.m.