Local dancers are flocking to Bat Yam to take advantage of the Kelim choreography center and school. 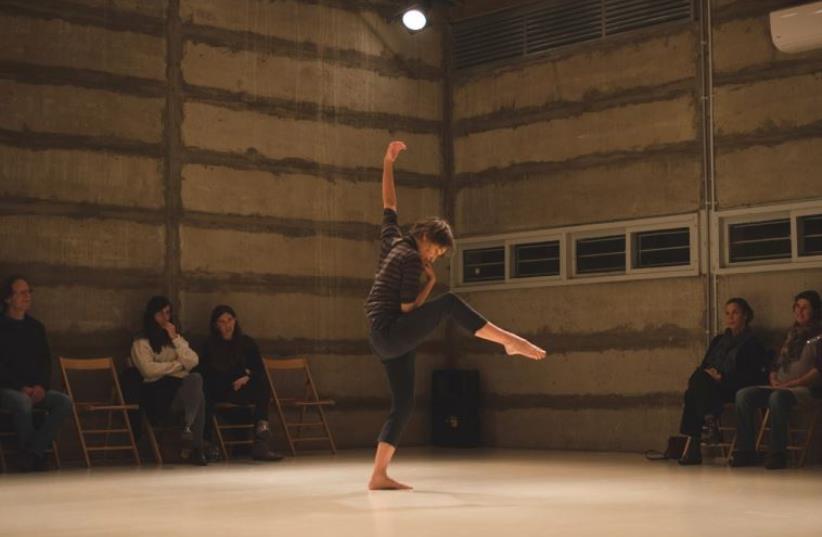 CHOREOGRAPHER ANAT DANIELI presents ‘Movement Material.’
(photo credit: YAIR MEYUHAS)
Advertisement
As the story goes, the Brooklyn Bridge was originally built to allow Manhattan workers access to what was thought to be the prime real estate of the area. After all, who would want to live in a cramped environment like Manhattan? Few foresaw that the bridges would actually be used in reverse, to allow throngs of workers, residents and tourists into Manhattan rather than out of it.For the group of artists quickly banding together as a community around the Kelim choreography center and school, such feels true of the Ayalon Highway. Whereas five years ago, to create dance meant to be present in the center of Tel Aviv, today’s independent choreographers are doing a one-eighty and heading straight for Bat Yam.Kelim is the brainchild of choreographer and teacher Anat Danieli and Tal Gravinsky. After years as one of the most respected artists in the local milieu, Danieli, 50, took a pause to regroup. Teaching had always been a part of her professional life, however Danieli found herself increasingly drawn to the classroom, particularly as a mentor for novice choreographers.That pause began a chain of events that resulted in the establishment of a gorgeous dance center in Bat Yam.Kelim is currently the host of a builtout, two-year version of Danieli’s initial choreography course (which will soon pick up from one day a week to two), a handful of performance series, a reading group, lectures and more.Next month, the students of the choreography course will take over the space with showings of their work.“Kelim didn’t start because I woke up one day and decided to open a big center,” explains Danieli over the phone. “It started from a course I did of four meetings at the end of which there was interest in more and it grew and grew. I want to continue to allow things to grow organically.” It was in one of these first meetings that Danieli first met Gravinsky.In 2009, Danieli and Gravinsky opened the first official incarnation of the Kelim choreography program.The group met once a week to workshop their creations, usually in rented studios in the Tel Aviv area.Then, two years ago, Danieli and Gravinsky found themselves faced with an intriguing opportunity. A 270-meter warehouse was available in Bat Yam. With a fair share of renovation and TLC, the two women envisioned a great opportunity for themselves and their peers in the dance world. They were also faced with a major question: would dancers and choreographers make the trek out of the city to use it? “We want to pull people toward us, to turn ourselves into a center of activity, of meetings of interactions,” says Danieli. “Getting people to come out of Tel Aviv was a challenge at first, but as time passes and more people hear about what we are doing, it gets easier to convince them to make the trip.”This year, aside from renovating an additional 150-meter space, Kelim will open a residency program. The initiative will offer selected artists their run of the space, be it for performances, rehearsals or lighting experimentation.“The new residency project is unique in Israel. We are bringing people to come work here, to choose if they want artistic mentorship, production assistance, to choose if they want to produce a show here. They can work with a lighting designer and any other kind of artist or technician that they think will assist their process,” says Danieli. For now, the residency program will be open only to Israeli artists, with the hope of expanding it to include foreigners in the near future. 2016 will also bring in the first annual artist-in-residence, May Zarhy.For the Kelim team, it is incredibly important to stay connected not only to the dance world but to the surrounding community.“We are constantly asking how we can, even just a little bit, change the reality of the people around us. We want to reach the people living in Bat Yam, to offer them something that didn’t exist before,” explains Gravinsky. “Every artist who is going to do a residency will do something that interests them with people in town. Dahlia Chaimsky and Hannan Mars run a group who meet with the elderly once a week. We are promoting a film that will be screened at the Bat Yam Film Festival.We are working with a group of local Ethiopian women as well. They use the Kelim space to work with a choreographer, once a week for two hours and are guests of all the shows that take place here. Outreach is certainly a priority for us.”To continue Kelim’s rapid growth, Danieli and Gravinsky reached out to Moshe Shechter, who today serves as project initiator and developer for Kelim. One of Shechter’s babies is an exchange with an arts space in Vienna, which will be revealed in further detail in the coming months.“I think there are so many connections that are being made here,” adds Shechter, “there is a choreography of connections of people coming from dance community and beyond.”And now, with Kelim up, running and picking up steam exponentially, Danieli has gone back to her roots as a choreographer. This week, she will present Movement Material, a performance comprised of segments from older works.Anat Danieli will present Movement Material on May 30. For more information about Kelim, visit www.kelim.org.il.