Being stranded on Mars is no laughing matter. Or is it? 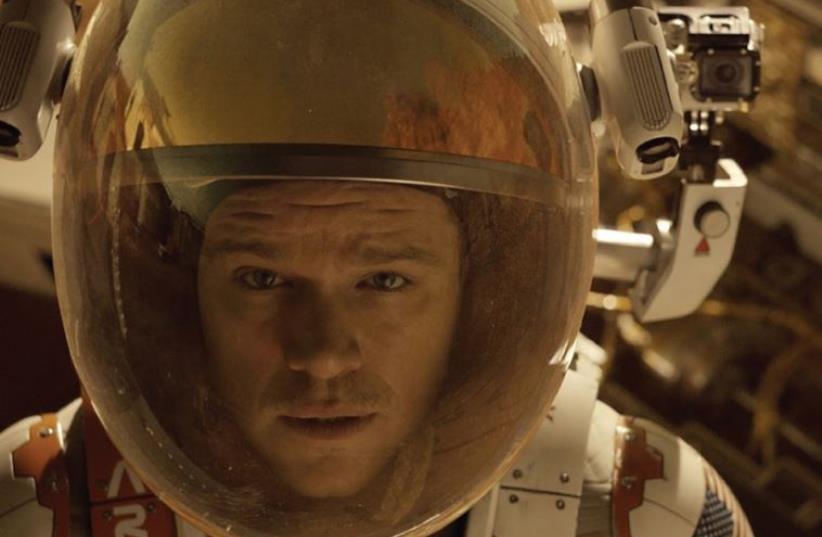 'The martian' movie
(photo credit: PR)
Advertisement
Matt Damon has been a lot of things in a lot of movies, but it’s not often that he’s been funny. The biggest surprise in Ridley Scott’s latest film, The Martian , is that Damon is very funny, in a movie that you wouldn’t have expected to have any laughs. So if you’ve been put off by the posters advertising the movie that show a flat close-up of Damon’s face in an astronaut’s helmet, the good news is that he is far more animated than he’s been in almost any other film. It’s not that Damon isn’t a good actor, but he’s often been cast in parts, such as in the Bourne films, where he has to play an emotionless tough guy or a put-upon everyman ( Contagion and many others). In The Martian , he seems to be channeling the snarky commercial pilot he played who, for a few episodes, seemed to be Tina Fey’s dream boyfriend on 30 Rock . The Martian is one of the new breed of space movies – among them Sunshine , Gravity and Interstellar – that view space in two ways. On the one hand, new camera and computer imaging techniques make it possible to film outer space in a way that looks more realistic than ever before. You really feel that you are out there right next to them, hanging on to the outside of the ship as it floats through the darkness. In Alfonso Cuaron’s Gravity in particular, space looked very spooky, exciting and deadly at the same time. But recent movies are also presenting it as a place we need to adapt to now that we’re coming closer to destroying Earth, like a commuter forced to move to suburbs that are increasingly far from downtown. Damon is at the center of this as Mark Watney, an astronaut who gets left for dead on Mars, where he is on a research mission and is meant to be there for months with a group of other astronauts. They are forced to flee when a sudden storm roils over the planet and they have every reason to think he has been killed. But Watney, a biologist, is still alive and goes about saving himself. It seems like an impossible task, and the fun of the movie is watching him overcome every obstacle. To be honest, I am the last person qualified to evaluate any of the science in the movie, but it seems to be the usual mix of well- researched facts and utterly outlandish plot turns described in very believable language. About half of the movie consists of Watney talking to himself – and eventually to top NASA officials when he manages to set up communication with the control room back on Earth. The other half is the debates over how long he can last and whether it’s worthwhile to risk other astronauts’ lives to save him. The top brass of NASA and various other officials are played by a star-studded bunch, among them Jeff Daniels, Kristen Wiig, Chiwetel Ejiofor and Sean Bean. The astronauts who took off without him are a young, attractive group, including Jessica Chastain (who was also in Interstellar ), Kate Mara ( House of Cards ) and Michael Pena. But all the scenes that don’t feature Damon are dull bordering on cliche, in spite of the actors’ best efforts. This movie is a one- man show, and it’s about a man willing to try everything to keep himself going, who displays the cockeyed optimism that is America’s most heartfelt image of itself. The movie is similar in structure to J.C. Chandor’s 2013 film All Is Lost , starring Robert Redford as a solo sailor whose boat is damaged and who fights to survive at sea. While in that movie the hero spoke very little, in The Martian Damon basically a does a two-hour stand- up routine. My favorite moment was when, after a major setback, he dips a potato in crushed Vicodin – “...because I can” – before eating it and somehow keeps us on the edge of our seats.