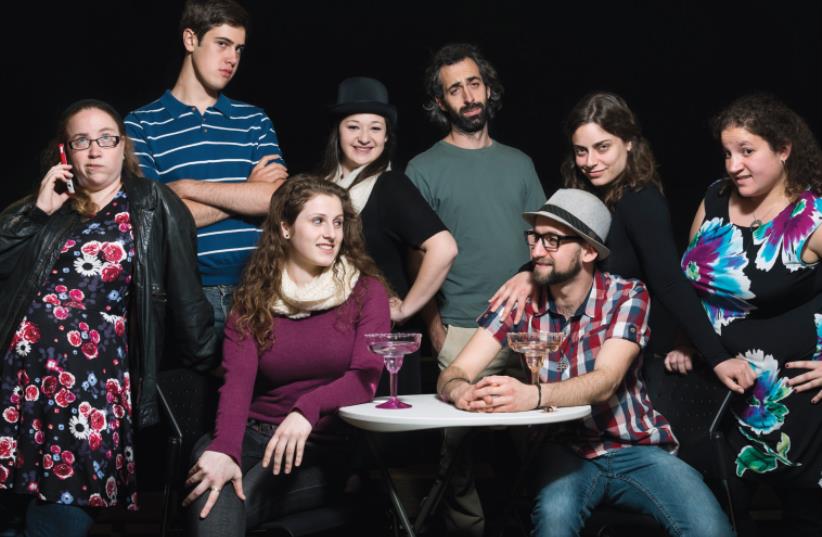 LOVE IS blind: The cast of J-Town Playhouse’s production of the musical comedy ‘First Date.’
(photo credit: ITA ARBIT)
Advertisement
There’s nothing that instills more fear in the hearts of men and women than a first date. The preparation and anxiety over what to wear, what to say and what to order is enough to make you wonder why anyone ever puts themselves through it. The musical First Date, which debuted on Broadway in 2013, takes a comedic look at this familiar ordeal. Just before the musical comedy takes the stage in Jerusalem, director Layla Schwartz sat down with The Jerusalem Post to talk about gender-bending casting, awkward pauses, and the best first date place in Jerusalem.Can you give a synopsis of ‘First Date’? It’s a musical comedy that takes place in New York City about two people in their late twenties who are set up on a blind date. The woman is a pro at first dates; she’s seen it all. The guy hasn’t been on a date in long time, since his fiancée left him at the huppah [wedding canopy]. He’s a little shy about getting back into the game. During the course of the date, they imagine their friends and family members coming to give them advice about how the date is going and what they should do; how they should behave, what they should order. Some of the advice is good and some of it’s not. It’s very tongue-incheek advice like the girl shouldn’t order the burger; she should order the salad to show that she cares about her figure. It’s more like a romantic comedy set to music.

Can you talk about the casting process? We had a lot of women show up to auditions, and not very many men. We actually had to gender-bend some of the characters, which doesn’t affect the story at all, except for switching some pronouns. We didn’t have enough men show up, and we had so many talented women! In this case, gender-bending worked for the show. We would have had to find men who weren’t as talented as the women we wanted to cast, so I’m glad that didn’t happen. Also, the two leads are perfect. I can imagine the two of them together. I didn’t have to do call-backs or anything; I just cast it from first audition.

Is that rare? A lot of people do call-backs, but for these auditions, we had them sing and read for a couple of different characters. I was able to get a real feel for their energy that way.It was actually a lot easier than I thought it would be. It was fun. I think someone’s energy has a lot to do with the characters they play. Maybe someone has a mischievous energy about them, so you say to yourself, “Oh, she could play the bad girl.” They might really be more of a good girl in real life, but they have that in them. Casting is about looking for the potential.

How have rehearsals been going? They’ve been going really well; it’s been a lot of fun. I’ve been lucky enough to have actors who want to try different things and have opinions about how things should be. We’ve had enough time in rehearsals to play and try different things to see what works. Everyone has a special sense of humor. The script is really funny on its own, but some things happened naturally or by accident actually.There’s this thing in the show called “awkward pause.” One woman could not come to rehearsal that night, so my direction to her was to awkwardly try to find a place on stage and portray someone who doesn’t feel that they fit in anywhere. If she had been at rehearsal, that idea may not have occurred to me.

Do you have a favorite musical number? Yes, I think my favorite number overall is the one I liked least when I first listened to it. It’s kind of silly. It’s when the guy realizes that his date is not Jewish, and he imagines his grandmother coming down from heaven and oy-va-voy-ing. The woman he is out on the date with comes from a very bible-thumping, Christian family. So he also imagines what their children would be like. I refer to it as the Christian nightmare scene. All his worries are so exaggerated, which is what makes it funny. There’s a lot of choreography in it, which was fun for me as a director. There are also three very different musical styles in the scene. The song is called “The Girl For You.”It seems like a show that everyone can relate to.

What do you think is the take home message for the audience?Because the date gets off to a bumpy start, you’re not sure how it’s going to go.Everyone can relate to that anxiety. Also, the build-up is very relatable. People build up how they should act on a date. In this show, we’ve got friends and family members giving advice or yelling at them for not doing the right thing. There’s that pressure that dating is not just two people; all the people in your life are involved in a way, or have an opinion. Even though it’s ostensibly a date between two people, there’s a lot more going on internally. We all have insecurities, hang-ups, and baggage, and everyone can relate to that.

Do you have a funny first date story?I didn’t go on my first date until I was 18 in college. I was so nervous, it was hard to have a conversation. Then as we were leaving, the guy patted me on the back and said, “That wasn’t so bad, was it?” But we were friends after that.

What’s the best first date place in Jerusalem in your opinion?I’ve never been on a first date in Jerusalem, but I would say the shuk might be a good place because there’s a lot going on.You could go for a walk around the shuk and then find a place to sit. There’s always something to comment on, in case of an awkward pause.

First Date runs at the AACI J-Town Playhouse through March 5. There is a special Valentines Day performance tonight at 7 p.m.For tickets and more information, visit www.aaci.org.il.
Advertisement
Subscribe for our daily newsletter