A guest of the Jerusalem Film Festival, Laurie Anderson reflects on life and loss in her latest film, ‘Heart of a Dog.’ 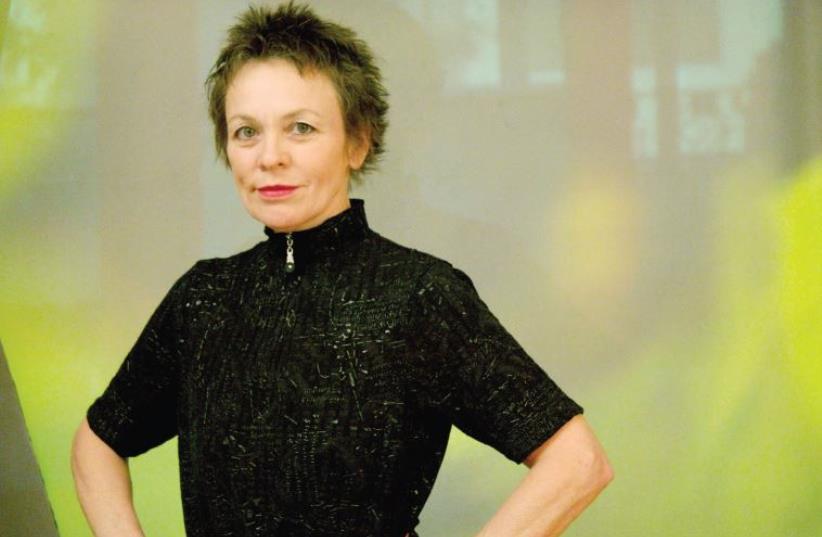 MUSICIAN AND performance artist Laurie Anderson reflects on the deaths of her husband Lou Reed, her mother and her beloved dog in her latest film.
(photo credit: JERUSALEM FILM FESTIVAL)
Advertisement
Doing a straightforward, conventional interview with Laurie Anderson would be like boiling a strawberry: it could be done, but it would be a lot better fresh.Anderson, a legendary hyphenate – she’s an artist, composer, musician and film director – is a guest of the 33rd Jerusalem Film Festival, which runs at the Jerusalem Cinematheque until July 17. She is here to present her latest film, Heart of a Dog.“It’s an essay film,” says Anderson. The movie focuses on her love for her rat terrier, Lolabelle, and her sadness over the dog’s death, but this is a jumping-off point for thoughts and images that seem random at first but circle back to some of the same themes: the confusion and fear after 9/11, the sadness of letting go of any person or creature you love, memories and the way they can reveal emotions or conceal them, and much more.It’s also a loving tribute to her late husband, musician Lou Reed, who died in 2013. The movie ends with a shot of Reed holding Lolabelle, as his song “Turning Time Around” plays and the words “Dedicated to the magnificent spirit of my husband Lou Reed 1942-2013” appear.“It’s a film with a million questions there are no answers to,” she says, sitting in a lounge at the cinematheque.Although Anderson, who has visited Israel before, is hugely admired around the world, she couldn’t be less of a diva.Soft-spoken and patient with interviewers and photographers, she was curious about the film festival and went to see as many movies as she could the day she arrived.When her first Heart of a Dog screening ended, she told the crowd that she would be happy to answer the questions but that another film was scheduled to start, so she stood in the hallway and spoke to well wishers for half an hour.In Heart of a Dog “I was trying to bypass the voice that tells stories too often.” Her memories of Lolabelle led her to examine dreams and memories from her life, and to dig deeper into what she thought she knew about her dog, herself and the world.In one section of the movie, she tells the story of how she broke her back at the age of 12 and was put into a hospital ward with many other children, some of them severely burned. Unable to move or even speak at first, she was told by a doctor that she would never walk again, and simply refused to accept this, telling herself “adults have no idea what they’re talking about.” Rather than dwelling on the impact of his words, she switched to an anecdote about how she suffered as smug hospital volunteers read to her from dull picture books, when she was already reading Dostoevsky on her own.Later, she realized when she told this story she left out the real pain and fear of the experience, especially the cries she heard on the ward, her own anxiety about her prognosis and the loss and dread she experienced when other patients died.“I told it as a 12-year-old tells it,” she said.“You tell the story you can tell... I wasn’t able to tell the story of how my parents never visited me.”Her parents, she said, had seven other children and just couldn’t make it.The movie is bookended by her memories of her mother. Early in the film, she describes her mother on her deathbed, formally thanking all her children for coming, then talking about animals on the ceiling.Later in the movie, she tells how, with the help of a trusted teacher, she thought back to a moment when she knew her mother loved her, a time her mother praised her skills, although Anderson had expected her mother to scold her for being irresponsible.“My mother was unable to love her kids. She was Confucian... not a cuddly mom,” said Anderson, who grew up in an Illinois suburb.In contrast to her difficult relationship with her mother, Anderson had a fierce love for Lolabelle. At the beginning of the film, Anderson tells about a dream that her dog was sewn into her body so she could give birth to her.The movie, which combines music, home movies, beautiful nature footage, drawings and much more also reveals some rather improbable facts about Anderson’s life, among them that she idolized John F. Kennedy when he was a US senator and entered into a correspondence with him.Not long ago, “I was doing a show at the Kennedy Center and I remembered another thing from when I was 12. I wrote letters to Jack [Kennedy]. I was a 12-year-old punk.I wrote him, ‘You’re running for president, I’m running for student council president, let’s share our tips and thoughts.’” Kennedy wrote back, and she eventually responded, telling him, “I won my election, good luck with yours,” and received a telegram of congratulations from the presidential candidate, along with a dozen red roses.Anderson moved easily and naturally from discussing her childhood hero to explaining a little bit of what she has learned about Buddhism and how it inspired her to imagine what Lolabelle was doing in the Bardo, a Buddhist conception of a transitional state between two lives on earth.Speaking of transitions, Anderson said she had been in Greece before coming to Israel and had visited migrants in Lesbos.She had been commissioned to write music for migrants, and she wanted to see them first. She was encouraged, she said, that the conditions were better than she had expected, but was not quite sure what kind of music she would write.“I don’t understand the idea of writing music for people... I consider myself an average person, and I think if I like something, other people will, too.” The idea of using music to “make the world a better place” confused her, she said. “I do like the world as it is.”