Meat: All you can eat 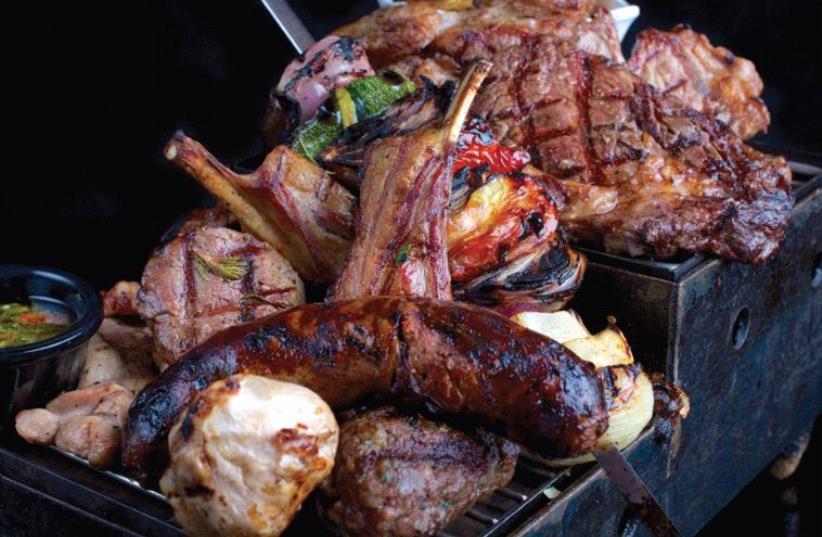 Rak Basar
(photo credit: PR)
Advertisement
On the last Tuesday of every month, the restaurant chain Rak Basar (Only Meat) holds what it calls a festival – an all-you-can-eat extravaganza featuring eight kinds of meat. There is certainly a festive atmosphere, with party hats, a drawing for prizes and loud contemporary Israeli rock music. Seating is at long tables, designed to get diners to socialize with new acquaintances.From the moment you enter the restaurant, there is no doubt about the food that is to come, even though there is no menu. The first thing to catch your eye is a display case of meats waiting to be cooked, followed by a huge flaming grill.There are two sessions to the evening, at 6:30 and 9:45, and they start punctually. Waiters come around with different meats one after the other. After sampling each variety, you can choose your seconds (or thirds) of whichever you want more. (I arrived at 6:40 p.m.and missed the first pass.) Tables are set with jugs of red wine, bottles of water and carafes of lemonade and orange drink. “All you can drink” is the welcome companion to “all you can eat.” The house wine is Segal’s Marom Galil, a drinkable table wine.There was a basic green salad – lettuce, cucumber, red onion, and tomato – in a dressing that recalls a neighborhood steakiya. We had to ask for bread, but a fresh individual loaf came right away.Our first meat sampling was a US-style chili con carne, with ground beef and red kidney beans, served in a skillet, although it was lukewarm when it arrived. It was seasoned with a nice mix of spices, in which cumin and pepper played a noticeable role.Next came beef carpaccio, garnished with herbs under a drizzle of olive oil, in small trays that kept on coming throughout the meal. These shavings of beef went well on the whole wheat bread.The entrecôte course consisted of slabs of steak cooked medium rare. My companion declared hers very good, but mine was too fatty to finish.These were followed by sirloin steaks, which were indeed more flavorful, although here the culprit was gristle.The only condiment on the table was chimichurri, which did little to enhance the meat. Ketchup is available on request, and mustard theoretically, since we were promised it twice; but it never came. The wait staff was friendly and efficient, although so busy you felt as if you were imposing if you had a special request. Not to mention having to contend with the noise.Next we were served chorizo, which turned out to be a very respectable representation of this particular type of sausage. Then came kabobs, which were thick and well seasoned. At this point, French fries were served familystyle in the middle of table; they were a tad underdone but hot and tasty in the familiar McDonald's mode.The final serving of meat was pequenia (skirt steak), which my companion said was her second-favorite cut of beef of the night.An unexpected bonus came in the form of “shots” (“chasers” in Hebrew slang): waiters bearing bottles of Jameson, fidg (fig liqueur) or arak. If you can flag down another waiter, you can get crushed ice for your drink.When the second round of meat service began, we got the opportunity to try what we had missed: asado (short ribs) with the faintest drizzle of chipotle sauce, which did little to improve the dry, chewy beef.We noticed a difference between the first and second helpings of even the same cut of meat: My companion’s second sirloin steak was much inferior to her first.At our 6:30 seating, the drawing was held around 8 p.m. I won a second round of chasers, which I could not accept, since I had to drive home. First prize was a NIS 150 coupon for a return visit to the restaurant.Desserts are announced as dairy or parve. The latter was two scoops of sorbet: tart and refreshing passion fruit, and green apple that tasted like bubble gum. The dairy option was disks of parfait – halva and chocolate, with fudge sauce – that tasted parve.The crowd was overwhelmingly male and somewhat on the younger side.They really seemed to be enjoying themselves, even getting close to rowdy at times, such as when there was a beerchugging contest.For carnivores who prize excess, the price for all this food and drink is NIS 180, or NIS 155 for members of Rak Basar’s loyalty club (you can join the club for NIS 25 and be entitled to the lower price on the spot).For diners desiring value without the frat party atmosphere, the chain offers extended hours for its deeply discounted business lunch – just finish eating by 7 p.m.The writer was a guest of the restaurant.Rak Basar Not kosher 14 Raoul Wallenberg St., Tel Aviv (branches in Haifa, Rishon Lezion and Jaffa) Tel: 1-700-550-028