Israeli-Yugoslavian artist and Holocaust survivor Maty Grunberg returns to his birthplace for a triumphant exhibit. 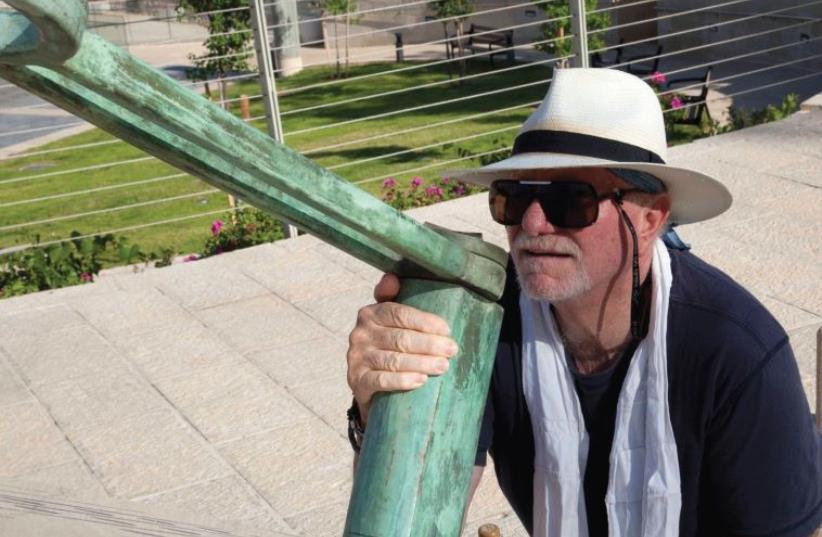 LOCAL SCULPTOR and painter Maty Grunberg with his sundial at Teddy Kollek Park in Jerusalem.
(photo credit: RAN EDRE)
Advertisement
Sculptor, painter, and Holocaust survivor Maty Grunberg is a well-known artist in Israel. This month, he returns to his birthplace of Macedonia for a very special exhibition at the Holocaust Museum in Skopje. Opening just days after his 73rd birthday, Grunberg’s new exhibit, Haunted Memories, is a collection of paintings that memorializes this horrible period in Macedonia’s history, where Grunberg was the only baby to survive and nearly the entire Jewish community perished in Treblinka. Haunted Memories is an astounding tribute to Grunberg’s story, and the fact that he is still here to tell it.The exhibit opened March 10th and will be up for six months. A second, sculptural exhibit at Bitola’s Jewish Cemetery is in the works, with models and renderings currently on display. The Bitola cemetery exhibit will be a permanent memorial.Grunberg sat down with the Jerusalem Post to talk about buried memories, the sad scent of oranges, and taking strange ways to destiny.Can you talk about ‘Haunted Memories?’ When I was a student in London in the early 1970s, it was a very dark place. There were a lot of strikes. It was a depressed city.I was very lonely there as a student and I didn’t know where to turn. The idea to revive my parents’ memories into some artwork came about at that time. The project began with The Chimney (one of the pieces in the exhibition). I was on the way to Sheffield one day for an exhibition, and as I was passing this industrial zone, there were a lot of chimneys blowing smoke. I was looking at them for a long time, and I thought how much it was evoking lost memories of my family who perished in the tragedy in Macedonia. I was born on March 4th 1943, and on the 11th of March, the Jews of Macedonia were gathered by the Bulgarians, and sent to the Treblinka concentration camp. Nobody came back. 97% of Macedonian Jews perished, so it was a colossal loss. My family survived because my father who was an engineer, was asked by a Christian family to run a small flour mill. Bread during the war was a very precious thing. They knew that we were Jewish and they took a risk.At that time, families who gave shelter to Jews were also sent to Treblinka, so it was a tremendous risk. Every time when the German troops were passing on the main road, my parents would rush me and my granny into the attic, and we would hide. I remember that vividly. I remember looking at my mother and seeing her face all white from fear. All those memories are buried in me.These buried memories also surround your emigration to Israel?Then later on, when we arrived to Israel, there were 3,600 Jews in our group in 1948, the journey was tremendous. Our ship was a very bad ship; it was old. A journey that was supposed to take three days, took about two weeks. When we arrived to Haifa, all the people who came out of the ship, lied down and kissed the ground. I couldn’t understand that. Then somebody came in rubber clothes and sprayed everybody with DDT. So all the figures looked white with powder. Then they drove us south, and there was a fantastic scent of oranges. The old roads from the north to the south were full of orange groves. I looked back and everybody was crying. So always in my memory the scent of oranges and people crying was connected. Then we moved to Bat Yam, and our lives went from zero to recovery. But all those early memories, I put in those Haunted Memories works. When I go back to Macedonia on March 4th, I’m going to be 73. They’re giving me the greatest honor. According to what I understand, I’m the only Jewish baby who survived that Holocaust. Going back to my exhibition there is a reminder that life sometimes takes strange ways to destiny.Can you describe the sculpture exhibition in the Jewish cemetery of Bitola?Yes, it’s a huge cemetery. The precious stones and marble that people carved their names into were taken to use as materials for other buildings. The cheap stone that’s not fancy or precious was left behind.Ironically, it’s a lesson to not make yourself a precious grave when you die. I’m going to do a few projects there. The cemetery became part of the city, as Bitola grew up around it. I want to turn it into a memorial park, not just for the Jewish people but for the whole tragedy of the 11th of March 1943. I’m doing a small monument there in the form of a sundial, then on the top of the hill, I’m putting a sculpture called “Point of View.” People will be able to peek through and look at different historic sites like the cultural center and very old, big mosque from the Ottoman period.Bitola was a city that was the main route from Rome to Constantinople. I asked the Bitola people why there’s no airport there, and they told me that the Greeks don’t allow them to have one. In Bitola was the palace of Philip, the father of Alexander Mukdan. The main palace was in Bitola, but until today there’s an enormous feud between the Greeks and the Macedonians about Alexander Mukdan. They have a chance to live in peace and prosper, but these things hold them back.Will this be the first time you’ve done an exhibition in a cemetery? Yes, but right now it’s just a proposal, it will take about a year for the whole thing to be built because it’s a big project.How do you feel to be returning to Macedonia? I feel very strange; it’s the peculiar side of destiny. I’m going back to the place where I was born. I wish that my parents were still alive to see it.