Mixing it with the Bard

Shakespeare takes a vernacular turn at the Tmuna Festival in Tel Aviv. 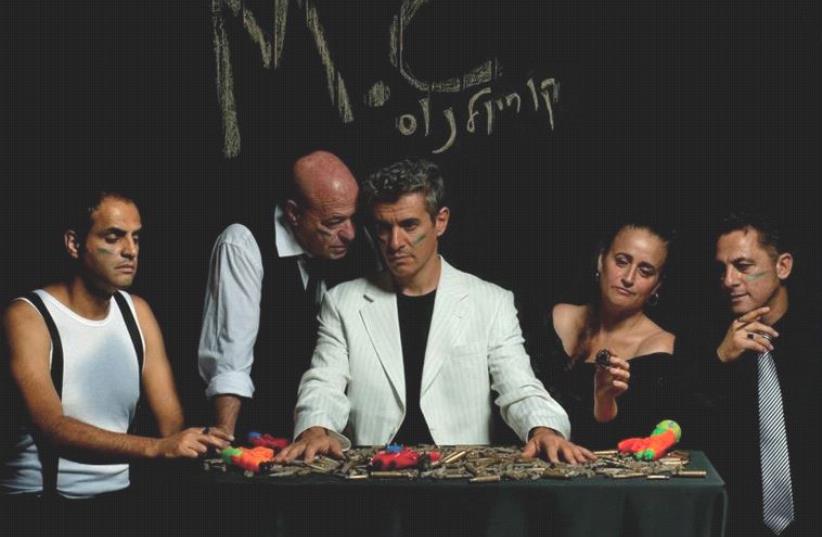 ‘Coriolanus’
(photo credit: YOHAN SEGEV)
Advertisement
William Shakespeare would, no doubt, have approved of Michael Peers’s efforts to make the Bard’s works more accessible and comprehensible to the populace at large.Peers is coming here from London to take part in the Mix the Play panel session, which will take place on September 30 as part of the Tmuna Theater’s 2016 International Theater, Performance and Dance Festival. The cross-disciplinary bash kicked off yesterday and runs through to October 1.The diverse program takes in five dance productions – from Germany, Poland, the UK and Israel – with 12 theater and dance premieres, workshops, movies and symposiums, all based around the work of Shakespeare, who died exactly 400 years ago.The performers, workshop moderators and panel interlocutors have plenty to work with, as possibly the greatest playwright of all time was not just a favorite of Queen Elizabeth and the wellheeled, but he was also very much a man of the people. His plays, across the board, feed off street-level emotions and strata and everyday life, as he expresses the multifarious faces of English society and human behavior.Fittingly, the festival roster includes a couple of professionals from Shakespeare’s homeland, the “sceptered isle” as he lovingly called it in Richard II.The British duo are Peers and acclaimed director/actor/lecturer Nick Hutchison.Hutchison will direct the intriguing Now I Am Alone production and will share editing duties with Dori Engel. The show focuses on Shakespeare’s depiction of a motley swathe of outsiders, including the characters of the exiled king, the fool, the refugee and the social outcast. The show tells the story of these people and proffers their unique viewpoint on life – through humor, irony and anguish – the point of view of the writer himself. He show will be performed on September 29 and 30 (both at 8 p.m.).Meanwhile, Peers will be one of the protagonists of the Mix the Play session, which features a string of artists and culture entrepreneurs, such as Emmanuel Witzhum, whose numerous roles include serving as head of the Arts Discipline in the British Council in Israel; Tmuna Theater curator and initiative developer Yair Vardi; and artists Miri Segal and Neora Shem Shaul. The two-hour event will be moderated by performance and new media creator and researcher Erez Maayan.Peers is eminently qualified for his gig here. He heads digital activity at The Old Vic theater in London, having previously worked in the Broadcast and Digital Department of the National Theatre.“My work is about making theater more accessible,” he explains. “The role is about focusing on audiences and finding new ways of engaging people.Digital has become a big part of communications over the past 10 years, and we want to be able to push boundaries further than before.”A major part of that welcome initiative centers on the Mix the Play project, which enables anyone to basically direct their own production of A Midsummer’s Night Dream, one of the Bard’s most popular and most frequently performed plays. The interactive forum invites online users to fashion scenes from the work any way they wish. They have at their disposal film samples and effects, and they can control a range of staple elements, such as casting, setting, costumes, acting style and music. Mix the Play is a video-based collaboration between the British Council and the Old Vic Theatre, located a stone’s throw from Peers’s previous employers at the National Theatre, just south of the Thames.Peers is keenly aware of the unavoidable truth that, like the classical music sector, theater audiences are generally aging. If that continuum is maintained, when nature takes its course the number of paying customers will dwindle. It is plain that theater needs to be marketed to younger people in as compelling and attractive a manner as possible. That’s where digital media comes into play.“Audiences in London are getting older, and most of the people on Mix the Play are under 24,” Peers notes.“It’s incredibly exciting.”While Shakespeare may have had his finger on the pulse of the common man and woman, today the meaning of some of his lines may be more than a little perplexing to the general public. Take, for example, Lady Macbeth’s no-nonsense observation that “You wait on nature’s mischief! Come, thick night, and pall thee in the dunnest smoke of hell, that my keen knife see not the wound it makes, nor Heaven peep through the blanket of the dark, to cry ‘Hold, hold!’” Dunnest, in case you were wondering, is the superlative form of the adjective “dun,” meaning “dark.”But it is highly probable that the average person today would not have the foggiest idea what it meant, and that includes the university educated.Peers says the online initiative is helping to bring Shakespeare’s works back to the common man. He believes that the initiative is very much about education, but in a userfriendly way.“In the past, education was very formalized, but now it is about creating content that is less intimidating and less about academia,” he says.“Four hundred years ago, Shakespeare’s audiences were wider,” says Peers. “His plays were not restricted to people of a certain class.Our format is designed to engage people on all levels,” he says.As Shakespeare noted in As You Like It: “The sight of lovers feedeth those in love.” Perhaps that also goes for the knock-on effect of Mix the Play.

For tickets and more information about the 2016 International Theater, Performance and Dance Festival in Tel Aviv: (03) 561-1211 and www.festivaltmuna.com.
Advertisement
Subscribe for our daily newsletter