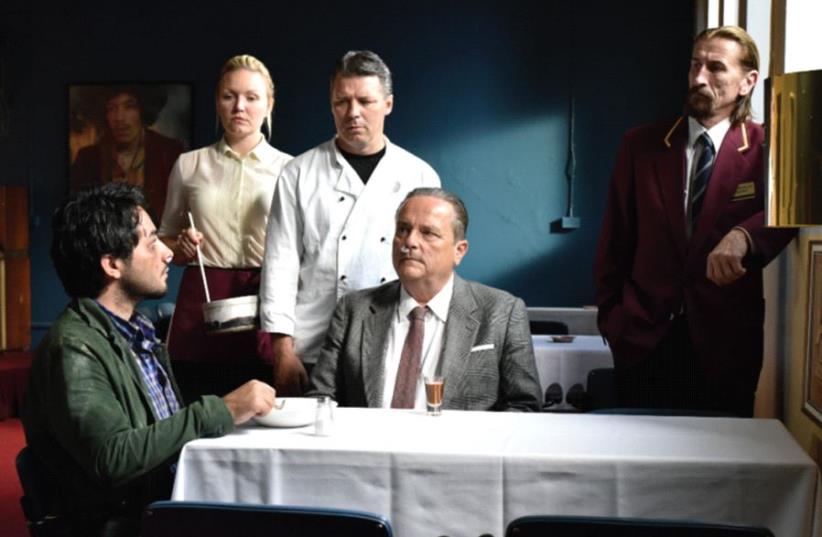 'The other side of hope'
(photo credit: PR)
Advertisement
The Jerusalem Film Festival turns 34 this year and, like any 34-year-old, it is old enough to be mature but young enough to be fun. The festival will take place at the Jerusalem Cinematheque from July 13 to 23, with some screenings at Yes Planet and the newly renovated Lev Smadar.The opening film will be Michel Hazanavicius’s Redoubtable.Hazanavicius, whose 2011 film The Artist won five Oscars, including Best Picture and Best Director, will attend the festive opening-night ceremony and screening at the Sultan’s Pool amphitheater.Redoubtable is a fictionalized story based on the life of iconoclastic French director Jean- Luc Godard. It premiered at Cannes to great acclaim. It is about Godard’s love affair with young actress Anne Wiazemsky, whom he first directed in La Chinoise and later married. The film is based on Wiazemsky’s novel and is set against the background of the 1968 student revolt.There will be more than 180 films from all over the world at the festival. Some films will be screened outdoors, for free, at different locations around the city, such as Mahaneh Yehuda market, Safra Square, the Old City, Zion Square and the Clal Building.There will also be interactive exhibits around the city that will focus on different genres and areas of cinema, including some designed for children.The festival features Israeli and international competitions, as well as classics, shorts and sections dedicated to the Jewish Experience.The Wilf International Competition will feature the best of contemporary world cinema, such as Sofia Coppola’s The Beguiled, which won the Best Director award at the Cannes Film Festival and stars Nicole Kidman; and Francois Ozon’s latest movie, Double Lover, starring Marine Vacth and Jacqueline Bisset.Ali Soozandeh’s Teheran Taboo is an animated film about three women and a man who rebel against Iran’s religious laws.Arnaud Desplechin’s Ismael’s Ghosts, which opened the main competition at the Cannes Film Festival, stars Mathieu Amalric, Marion Cotillard and Charlotte Gainsbourg in an unusual love story.The In the Spirit of Freedom Competition, which is held in memory of Wim van Leer, Cinematheque and festival founder Lia van Leer’s husband, features movies that focus on human rights. One of the films in this section is the new Aki Kaurismaki movie, The Other Side of Hope. This moving and funny film, which won the Silver Bear Prize for directing at the Berlin Film Festival, is about a Syrian refugee who is taken in by the staff of a failing restaurant in Iceland.The Gala Section includes some much-awaited high-profile movies. If you enjoy Kumail Nanjiani as Dinesh on TV’s Silicon Valley, you’ll want to see him in The Big Sick, an indie comedy about a couple dealing with cultural differences, which he co-wrote with his wife, Emily V. Gordon. Brigsby Bear is a strange satire that was a bit hit at Sundance, about a young man who has grown up in isolation watching a children’s television show. It stars Claire Danes, Mark Hamill and Greg Kinnear.The line-up for the Haggiag Competition for Israeli Feature Films includes new movies by veteran Israeli directors such as Savi Gabizon (Longing, which stars Shai Avivi) and by emerging talents, among them Shady Srour (Holy Air).The Van Leer Israeli Documentary Competition includes Ran Tal’s The Museum, a look behind the scenes at the Israel Museum; and Anat Yuta Zaria and Shira Clara Winther’s Meilech, about sexual harassment in the ultra-Orthodox community.The Jewish Experience is a very rich category this year. One unusual film in the section is Menashe, a contemporary American movie in Yiddish, which was directed by Joshua Z Weinstein. It stars the ultra-Orthodox Menashe Lustig in a story based on his struggle to keep custody of his son, following the death of his wife. It has been an audience favorite at film festivals all over the world.Alexandra Dean’s Bombshell: The Hedy Lamarr Story tells the story of the gorgeous Austrian Jewish movie star who is better known for her beauty than for a code she created that was used by the Allies against the Nazis.The Cinemania category includes documentaries such as Mark Kidel’s Becoming Cary Grant; and 78/52, Alexandre O. Philippe’s look at the shocking shower scene in Alfred Hitchcock’s film Psycho.Director Claude Lanzmann is best known for Shoah, but he has made films on a wide variety of subjects, such as Napalm, a documentary about North Korea that traces the roots of the country today back to the 1950s, which will be in the Masters section. His 1973 documentary about Israel, called Israel, Why, will also be shown.There will be a number of screenings of Israeli films at the festival, including a restored version of Matzor (Siege), a 1969 film directed by Gilberto Tofano.Starring Gila Almagor and Yehoram Gaon, it tells the story of a war widow who is pressured by her husband’s friends not to move on with her life. It was shown in the Cannes Classics section last spring.The festival will feature a tribute to French director Jean-Pierre Melville (who was born Jean-Pierre Grumbach to a Jewish Alsatian family). It will include some of his greatest movies, such as Bob the Gambler and Army of Shadows.The festival is programmed by Elad Smorzik, the artistic director, and Noa Regev, the festival director and CEO of the Jerusalem Cinematheque.The Jerusalem Film Festival runs from July 13 to 23. Tickets are available at the Jerusalem Cinematheque box office or festival website http://jff.org.il/ uuuu