More than a meal

OCD presents a nine-course dinner that is an experience in itself. 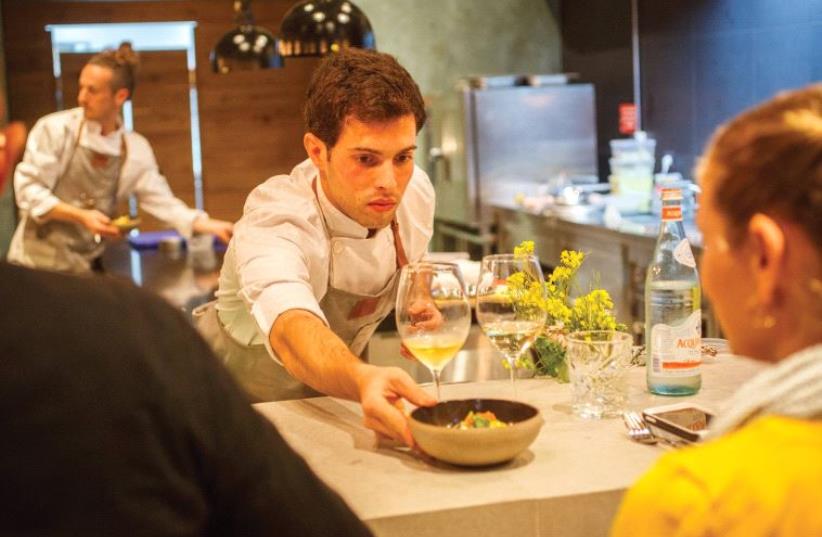 OCD restaurant
(photo credit: PR)
Advertisement
There are few restaurants out there where the meal is more than a meal and becomes a dining experience. OCD is one of them.Having opened a few months ago in the Noga neighborhood in Old Jaffa, OCD is the brainchild of chef Raz Rahav, who previously worked at Popina, a renowned restaurant in Neveh Tzedek.The setting is unique, as 18 diners sit around a U-shaped table in front of a large open kitchen, where the food is assembled and cooked by Rahav and his sous staff before your eyes.The nine-course tasting menu (mainly meat and seafood) is the only option and the only one you’d want, as each expertly prepared course is more beautiful, flavorful and artistically presented than the next. Differing from other tastings at fancy restaurants where things seem a little too stiff or orchestrated, the atmosphere here is one of dining in a friend’s kitchen.OCD presents two services every Monday to Friday evening at 7 p.m.and at 9:30 p.m. The meal costs NIS 280 per person, and reservations are required. What really impressed me is that the restaurant manager contacted me shortly after I made my reservation to inquire if either my dining partner or I was allergic to anything and if there was anything specific that we didn’t eat.At the restaurant, after all the diners were seated, Rahav introduced himself and his team, inviting us to walk around the kitchen and take pictures at any time. The vibe was slightly intimidating at first, but once the meal began, that feeling went away pretty quickly.The symphony of food started with a trout sashimi, buttermilk vinaigrette and compressed cucumbers with gin, pickled shallots, dill oil, lemon powder, capers aioli and puffed buckwheat. This was where OCD’s exquisite presentation became evident. I was so mesmerized by the colors and the beauty of the dish that I almost didn’t want to spoil it by digging in. The sashimi was fresh and tasty, but this dish seemed to be more about delighting in the experience of being able to play with your food, mixing and matching the different accompaniments with the fish.We were then presented with a white grouper tartare with whipped tomato cream. The grouper was rich and creamy, with a melt-in-your mouth texture.Next up was the beef tartare with kohlrabi cream, macadamia nuts, Dijon mustard aioli and white chocolate and mustard leaves. When it arrived, I marveled at its beautiful presentation. The mixture of tastes and textures of the meat, kohlrabi, mustard and chocolate was absolute bliss. The essence of this dish was so complex, and the flavors blended together like magic.This was followed by a European steamed sea bass (as I don’t eat shrimp, this was prepared as an alternative dish for me and two other diners) on a bed of risotto, cashew butter, lemongrass and sesame and bok choy. The sea bass was made to perfection: crisp on the outside and soft and buttery on the inside. I devoured the entire dish in minutes.In between, we chatted with our fellow dining companions, which included a family from Germany who were loving the whole gastronomic experience.The next course consisted of grilled duck hearts with pickled sweet corn, almond cream, gingerbread crumble and habanero oil. I’ve enjoyed chicken hearts plenty of times, but this was the first time I tried duck hearts. The duck heart isn’t as scary as you might think.It was actually sweet and meaty. I wasn’t a big fan of the texture; however, I consider this a personal preference, as the dish was well prepared and very the flavorful.We were then served duck breast with carrot juice reduction, soya sauce and sage cream. This was delicious; the meat was tender and the skin nice and crisp. The carrot juice and soy sauce went really well with the duck, as it was sweet and tart at the same time, cutting the richness of the duck.Dessert was on a par with the rest of the meal. It included a hazelnut and bay leaf creme brulee, as well as a honey parfait with pickled plum, mustard cream, powdered beets and geranium.Overall, there is nothing pretentious about the charm of OCD. Although the meal is rather expensive, it will be a night you will definitely remember and a dinner that will excite all your senses.