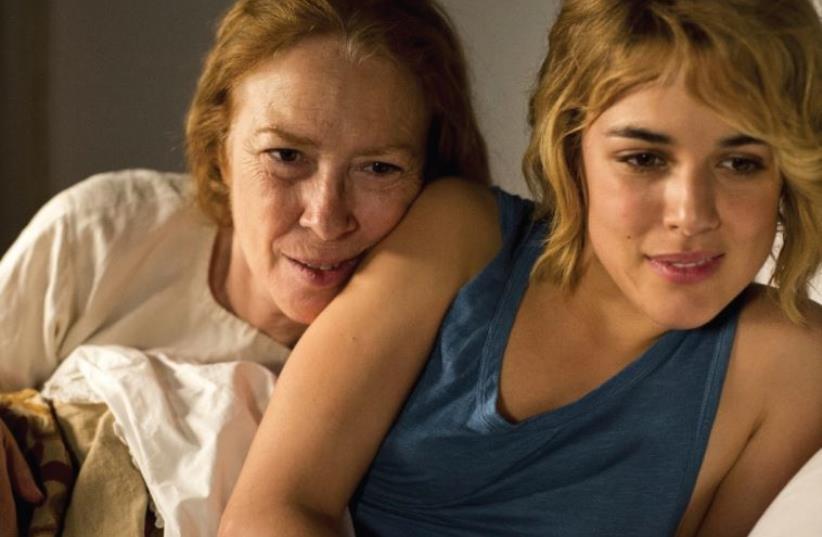 ‘Julieta’
(photo credit: Courtesy)
Advertisement
The 33rd Jerusalem Film Festival, which will take place from July 7 to 17 at the Jerusalem Cinematheque, will be especially star studded this year. Quentin Tarantino, one of the world’s most celebrated and audacious directors, will attend the opening ceremony at the Sultan’s Pool amphitheater, where he will receive an award for his contribution to cinema. He will be present on July 8 at a screening of his Oscar-winning classic Pulp Fiction in a newly restored 35-millimeter print that comes from the director’s own archive.Tarantino, who last visited Israel to promote his 2009 film Inglourious Basterds, is one of a great number of exciting guests who will take part in this year’s festival.Laurie Anderson, the legendary avant-garde musician/artist/filmmaker, will attend the festival with her latest movie, Heart of a Dog, a meditation on her relationship with her dog.Whit Stillman, whose latest film Love & Friendship, a Jane Austen adaptation starring Kate Beckinsale, will be among the guests. Stillman’s early films, among them Metropolitan and The Last Days of Disco, helped start the US indie film movement.Anthony Bregman, one of the most important producers of American independent cinema, will present James Schamus’s Indignation, an adaption of a Philip Roth novel about a Jewish boy attending a college in Ohio in the 1950s. Bregman has produced a long list of prestigious films, among them Foxcatcher, Eternal Sunshine of the Spotless Mind, Synecdoche, New York and The Ice Storm.The opening-night movie, Pedro Almodovar’s Julieta, loosely based on Alice Munro stories, tells a complex story of a woman and her estranged daughter. Its star, Emma Suarez, who is one of the actresses who plays the title role, will attend the festival’s opening night.There will be a long list of special events, among them master classes with many of the guests. Among the guests will be cinematographer Andreas Sinanos; Dylan Leiner, vice president of Sony Pictures Classics; Grímur Hákonarson, the Icelandic director who made the acclaimed film Rams; Alison Thompson, former president of Focus Features; Giorgio Gosetti, director of the Venice Days section of the Venice Film Festival; Rémi Burah, vice president of ARTE France; and Roberto Olla, executive director of Eurimages.The festival, as always, will feature the best of international contemporary cinema, as well as the top movies from Israeli filmmakers.This year, there will be a new competition for international cinema, the winner of which will receive the Wilf Family Foundation Award. This new prize joins the Haggiag Competition for Israel Feature Films, The Van Leer Competition for Israeli Full-Length Documentary Films and Short Films, the Jewish Experience Awards (courtesy of Michaela and Leon Constantiner) and the In the Spirit of Freedom Awards for films that focus on human rights, as well as several other prize categories.The spirit of the Jerusalem Cinematheque and film festival founder Lia van Leer, who passed away in 2015, will be present in the more than 200 richly varied films at the festival, from more than 40 countries. A restored copy of Le Bal, the Ettore Scola classic that opened the first festival in 1984, will be screened as a tribute to van Leer. It was one of her favorites.

To Take a Wife, the 2004 film that stars and was co-directed by Ronit Elkabetz, Israel’s leading actress, who passed away far too soon last April, will be screened to honor her. To Take a Wife is the first part of a trilogy that she and her brother, Shlomi Elkabetz, directed about an unhappily married Moroccan woman; Shlomi will speak at the screening. Yossi Aviram’s Il etait une foie, a documentary about this trilogy (the other two parts of which are Shiva and Gett), will also be shown at the festival.The Israeli competition will feature the latest films by some of Israel’s leading directors, among them Eran Kolirin (The Band’s Visit), Nir Bergman (Broken Wings) and Meni Yaesh (God’s Neighbors), as well as some promising newcomers.The festival is an eclectic mix of films, with something for everyone. There will be a number of films for children and, for the first time, there will be a Cinema Park with activities for children open in Wilf Independence Park (see In Jerusalem for more information).Among the gala films in the festival will be Andrew Rossi’s documentary The First Monday in May, a look at the annual gala fashion show at the Metropolitan Museum of Art in New York. The film, which is deliciously fun, opened the Tribeca Film Festival this year.Another film that is gossipy fun is Josh Kriegman and Elyse Steinberg’s documentary Weiner, a candid look at the mayoral campaign of former congressman Anthony Weiner, whose wife, top Hillary Clinton aide Huma Abedin, stood by him through his two sexting scandals.Among the many fine dramas is Kelly Reichardt’s Certain Women, about the interconnected lives of several women in Montana, played by Laura Dern, Michelle Williams and Kristen Stewart, based on the stories of Maile Meloy.Actor Matt Ross is known for playing bad guys on the TV drama series Big Love and Silicon Valley. His directorial debut, Captain Fantastic, stars Viggo Mortensen as an eccentric single father struggling to hold his family together.Lorene Scafaria’s The Meddler stars Susan Sarandon as a widow who moves next door to her daughter, whom she drives crazy.Dominick Moll’s News from Planet Mars is a very funny story of a divorced dad who tries to keep himself together during a series of very trying days.There will be a number of classic films that will be screened in newly restored versions, and film lovers won’t want to miss the chance to see them on the big screen. Among these is the late Rafi Bukai’s 1986 Israeli classic Avanti Popolo, about two Egyptian soldiers on a surreal journey after they are trapped behind Israeli lines in the Six Day War. Several members of the original cast and crew will be on hand.Nicholas Ray’s 1954 Joan Crawford vehicle Johnny Guitar, in which she plays a saloon keeper and gunslinger, will be shown.If you enjoyed Claude Lelouch’s recent movie Un + Une, you will want to see the classic film that put him on the map, the 1966 romance A Man and a Woman.Those interested in film history should check out the fascinating documentary Hitchcock/Truffaut, Kent Jones’s look at the week-long interview Francois Truffaut did with Alfred Hitchcock in 1962.There are many other fascinating documentaries in the festival. The master filmmaker Frederick Wiseman’s latest, In Jackson Heights, looks at one of the world’s most culturally diverse neighborhoods.Werner Herzog’s Lo and Behold, Reveries of the Connected World is about the Internet and how it is changing our lives.Dance lovers will want to see Thierry Demaizière and Alban Teurlai’s Reset (also known as Releve), a look at Benjamin Millepied (you may know him as Natalie Portman’s husband) and his brief tenure as the director of the Paris Opera Ballet.Laura Israel’s Don’t Blink — Robert Frank tells the story of the life of one of the world’s most celebrated photographers.Oscar winner Alex Gibney’s Zero Days follows the trail of Stuxnet, a malicious computer virus developed in Israel and the US to sabotage the Iranian nuclear program.

The Last Laugh by Ferne Pearlstein, a documentary about the Holocaust and humor, is sure to generate controversy. It features interviews with comedians such as Mel Brooks and Sarah Silverman, as well as concentration camp survivors.To order tickets and get information about movies and special events, go to the festival website at http:// jff.org.il/.
Advertisement
Subscribe for our daily newsletter