Music: A song for two 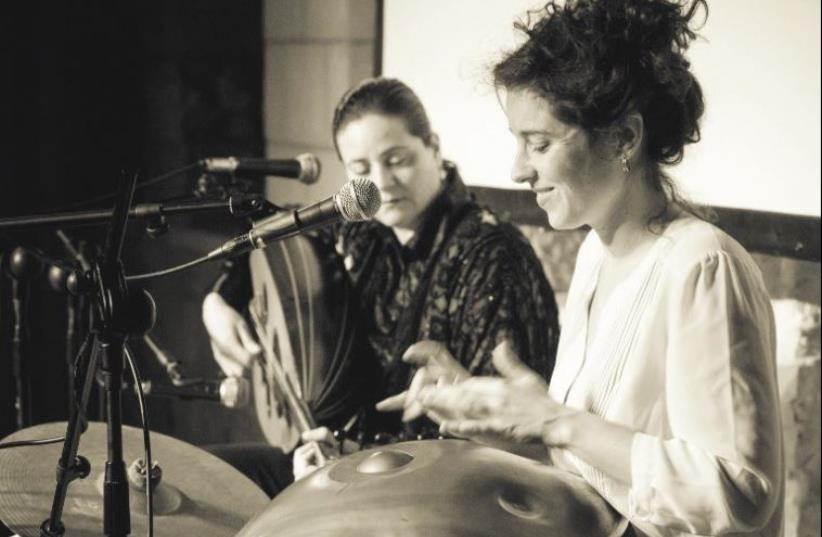 CHRISTIAN ARAB oud player Helen Sebilleh (left) joins forces with Israeli percussionist Liron Meyuhas for the Song of the Oud concert.
(photo credit: NOAM FINER)
Advertisement
The cultural melting pot that is Israel produces an amazing, and possibly unparalleled, array of musical synergies, from all manner of ethnic and sonic climes. Some of that was on display at the annual international jazz and world music showcase in Jerusalem and Tel Aviv last week, and there is more where that came from currently up and running at the Jerusalem International Oud Festival that takes place under the auspices of Confederation House.Naturally, when it comes to crossing over and blending energies and cultural baggage, Jewish-Arab fusions catch the ear and eye. One such confluence will take place tomorrow evening (8 p.m.) at Confederation House when Christian Arab oud player Helen Sebilleh joins forces with 30-year-old Israeli percussionist Liron Meyuhas for the Song of the Oud concert.For Meyuhas there was never any doubt over her choice of instrumental pursuit. It all started around 12 years ago when she was vacationing in Sinai with her family.“We used to go down there two or three times a year,” she recalls. “I was probably in the last grade in high school, and I’d hear the Beduin playing music. That time I just grabbed a darbouka and started jamming with the Beduin.”It seems the then teenager had no problems slipping into the right rhythmic groove.“I really connected with their music,” she notes. “It’s not something I can explain.”Meyuhas moved seamlessly into the percussion fast track.“It really took off after that for me. I took courses and lessons, and took part in workshops, and the rest is history,” she adds with a laugh.The tuition slipstream also fed off a wide swathe of musical influences which, says Meyuhas, did not exactly follow conventional contemporary lines.“I never listened to ‘regular’ things. I was exposed to lots of different kinds of music thanks, mostly, to my father. That opened me up to a lot of musical directions. I listened to records by people like Queen, Bob Marley, King Crimson and [Israeli rocker] Etti Ankari, you know things that are less well known.”That formed the bedrock of Meyuhas’s evolving musical consciousness, and she gradually began to carve her own path through a multitude of genres and styles, many of which emanated from this part of the world.“I started listening, more and more, to world music. I liked [pioneering Israeli eastwest music band] Bustan Abraham,” she says.The latter outfit was one of the forerunners of the crossover crowd and enjoyed a highly successful national and international performance and recording stretch between 1991 and 2003. The percussionist of the band was Zohar Fresco, now one of the world’s most celebrated purveyors of ethnic musical rhythms and who also appears in this year’s Oud Festival lineup.Meyuhas says she feels honored to be included in the same program as one of her early influences, and even recently hooked up with Fresco in an effort to push her skills further along the expertise continuum.“Last week I started to study with him, as a member of his women’s percussion circle.It’s a great honor to appear in the same festival as Zohar. There are so many amazing musicians playing in the festival.”Meyuhas and Sebilleh’s paths crossed three years ago, at an artistic venture of a different ilk.“Leehee Shulov brought us together,” says Meyuhas. Shulov is a well-known Jerusalem artist who also produces the annual Menofim arts extravaganza. Shulov asked Meyuhas and Sebilleh to play in the opening event of the Menofim program.Meyuhas had just returned to Israel from a four-year sojourn in Italy, where she studied jazz, but not just jazz.“I played all kinds of percussion instruments – darbouka and riff [similar to a tambourine] and djembe [from West Africa], and also worked with dancers and in all kinds of ensembles.”Meyuhas’s drumming arsenal also included a hang, a sort metal pan drum which offers a wide range of sounds and textures.So Meyuhas came back home packing plenty of percussion power and lines but, initially, had nowhere to go.“I had just come back to the country and I was looking for a musical direction.”Sebilleh was the perfect partner in musical arms at just the right time.“With Helen and me it was love from first sound,” she laughs. “I was really into Arabic music, and Turkish and Persian, you name it. I just wanted to play the stuff.While I was Italy, I had a great time and learned a lot, but I missed the music from here, from the Mediterranean.” The Menofim gig went swimmingly, and both musicians expressed a desire to do more of the same.“I thought it was going to be a one-off, but we both felt we had a common musical langue,” Meyuhas recalls. “We just felt so comfortable together on the stage, especially when we played Arabic music. We decided to carry on performing together.”Three years and dozens of shows later the two perform a wide range of musical works, from various sources.“We play sort of standards of Arabic music, as well as things Helen writes, that I write, and we have even written material together.”It is a multi-strand affair.“I bring all kinds of colors, from African music and others, and Helen also brings her training in western classical music to what we do.”It sounds like the Meyuhas-Sebilleh show fits the Oud Festival’s heterogeneous ethos to a T.The Jerusalem International Oud Festival runs through till November 21. For tickets and more information: (02) 624-5206 ext. 4 and *6226, http://tickets.bimot.co.il/ and www.facebook.com/conhouseisrael?fref=ts.