Veteran Israeli rock group Knesiyat Hasechel are looking forward to turning a gallery into a performance space at the Israel Museum this week. 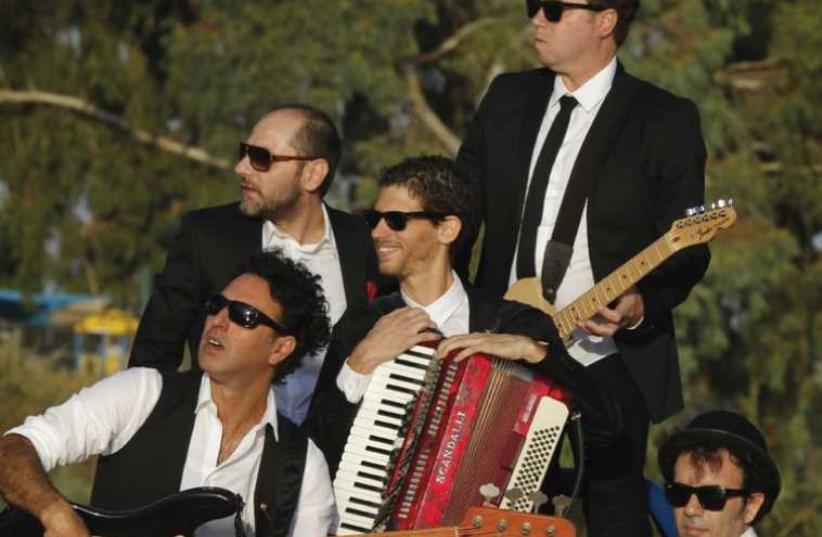 Knesiyat Hasechel
(photo credit: ODED LANDSMAN)
Advertisement
Yoram Hazzan will not be turning up at the Israel Museum on Thursday on a motorbike, but the two-wheeled machine has, at least nominally, been ever-present in his working life for well on three decades.Hazzan is a founder member of the Knesiyat Hasechel rock band. The Hebrew name translates as “Church of Reason” and comes from the expression in question noted in writer and philosopher Robert Pirsig’s cult 1974 tome Zen and the Art of Motorcycle Maintenance.“I think about things, about life in general,” says Hazzan, “but I am not a philosopher myself. You could say I view the world from a philosophical standpoint. The book put things into sharper focus for me. I reckon that also influences the way we make music – gives us a broader outlook.”Deep thinker or not, Hazzan and fellow band founder and member Ran Almaliach have been putting out their music and ideas to music fans up and down the country since the late 1980s, and to great effect. The twosome have been writing and, together with various other band members that have come and gone over the years, performing an infectious fusion of progressive rock and Middle Eastern sounds.While Hazzan and his pals are well known for pumping out the decibels, the forthcoming museum gig, which is part of a four-slot concert program running from tomorrow through to May 16 and features top acts Shlomi Shaban, Hava Alberstein and Micha Shitreet together with Arkadi Duchin, as part of the museum’s ongoing jubilee festivities, will be a far gentler affair.“We have been playing concerts for so long, and at so many venues,” notes Hazzan, “and the type of performance space always impacts on the nature and energy of the show. Performing in a museum gallery will affect the way we perform, and also on the audience. That’s for sure.”That, says Hazzan, is one of the things that keeps him, bass guitarist and co-songwriter Almaliach and the rest of the Knesiyat Hasechel gang on their toes.“It is always interesting to see how things pan out at one venue or another. I am intrigued and looking forward to seeing what happens at the museum concert.”It is fair to say that the band’s fans in the capital are with vocalist-guitarist Hazzan on that one.The museum show will, in all likelihood, leave its imprint of the way the five-piece band renders its repertoire which, naturally, will be based on acoustic instruments.But it is not only the size and nature of the location that will – pardon the pun – color the sonic output. Hazzan and his mates will also feed off the aesthetics of the items on display around them.“The plastic arts and all kinds of things impact on me and inspire me. The band has worked with [artist] Michal Rosner – she designed a cover for one of our records.Because of that we went to various exhibitions of hers, and went to her gallery, and you get an idea of the artist’s motivation to create, and that also has an effect on the music itself, it gives us a lot of inspiration.”Hazzan says he also likes to follow artists’ progress, and the way their work develops and, over time, becomes synonymous with the creator.“You see how their artistic language evolves, and that is fascinating. A lot of people tell me they hear a song of ours, and they almost immediately recognize it as ours. We have developed our own style.”Now in his forties, Hazzan says he has reached something of a comfort zone with himself, and that this maturity and self-acceptance allow him to put himself out there, warts and all. While progressive rock, and the likes of Nick Cave, as well as punk and Eighties music, were all enduring early influences on Hazzan and Almaliach, the singer feels better able to express himself more freely these days. That allows him and Almaliach to incorporate their Moroccan and other familial North African roots in their work.“You see that in our albums,” Hazzan declares. “The last album we released [Habayit Hachee Rachok, “The Furthest Home,” from 2013] – with the Andalusian Orchestra, we took our eastern side and ran with it all the way right to the edge. Until then we only sort of hinted at the eastern sounds that are part of our life. With the last record we took the Andalusian Orchestra and fine-tuned it, and ran with it all the way to Arabic music, pure Arabic music. There are quotes from composers from Egypt and Tunisia in there. We really went with who we are, and where we come from, all the way.”And if you’re going to be putting out feelers into your personal stratosphere it helps to have someone familiar on board for the ride. Hazzan and Almaliach have been buddies since childhood, and the singer says the synergy has been running smoothly throughout.“Over the years you understand what each of you brings to the work. That allows each of us greater freedom to engage in what we’re good at. That only serves to produce better end products, better songs.”Almaliach generally produces the lyrics, to Hazzan’s score, although the collaborators sometimes switch roles.While the two longtime friends have performed at various protests – including at various social protest gatherings of a couple of summers ago – Hazzan says he is not interested in spelling out his views, per se, in his music.“They say that Bob Dylan is one of the most political songwriters around, but he never gets on a soapbox, he just writes and sings about how he feels. That suits me too.”For more information about the Israel Museum music series: www.imjnet.org.il.