New chefs on the block 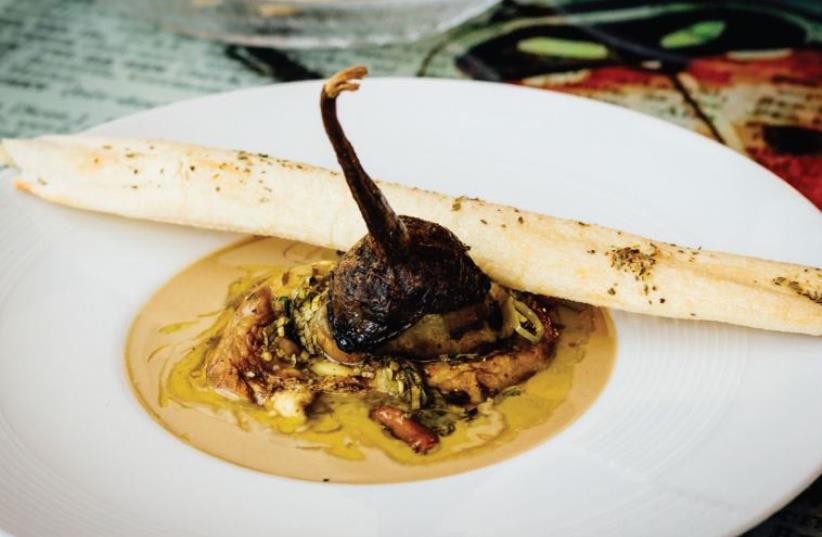 'Rina & Alice' restaurant
(photo credit: PR)
Advertisement
The corner of Keren Hayesod and Jabotinsky streets in Jerusalem is an interesting midway point between the outskirts of Jerusalem and the city center. It has a healthy balance of tourists from the bevy of hotels in close proximity to the well established neighborhoods of Talbiyeh, Rehavia and Yemin Moshe.With this as a backdrop, it is the ideal location for a variety of restaurants for a variety of people converging in this little spot of town.With tried and true favorites like the Olive and Fish restaurant and the P2 pizzeria, this location has seen a fair share of grand openings. Joining the ranks is the newly opened chef restaurant Rina & Alice, which opened in mid-November. It is the love child of Rinat Moyal and Alis Moyal Shefren.Focusing on contemporary spins on classic Mediterranean dishes, the talented young chefs show a lot of potential in satisfying the discerning tastes of the more forward-thinking and discriminating palates of Jerusalemites.I visited the restaurant with a companion on a particularly cold and rainy night, and the balance of the warm and cozy atmosphere, coupled with the elevated familiar dishes, allowed me to see the talent and potential the two women have.Upon entering the space, one cannot help but take note of the décor. With the speakers pumping out contemporary hip hop tracks and other trendy millennial-friendly music, it is clear that the young chefs are reaching a more youthful crowd. The space is open, dimly lit, with glass light fixtures suspended from the high ceilings. The color palette is simple, mainly reds, greens, black and wood.“Modern cozy” best describes the overall feel of the space.The place itself is not too small to give the feeling of ultra-exclusivity but not too large to feel like an industrial dining hall. There is a handful of cozy tables to accommodate two to four diners, plus a large table at the back for larger parties. Plenty of seating at the bar gives patrons a peek at the chefs at work in the kitchen. For those interested in having a view with their meal, the restaurant is lined with floorto- ceiling windows overlooking Keren Hayesod Street, where one can do some serious people watching while sitting on cozy cushioned banquettes.The knick-knacks and the wine collection on the walls that line the perimeter of the restaurant seem to be suspended in mid-air.For dinner, we enjoyed four carefully prepared dishes that were paired with a 2012 Chardonnay from the Two Vines Vineyard in Washington State.The dinner began with quite possibly the best baladi I have ever tasted. Roasted baby eggplant served with raw tehina, silan and chili (NIS 36). All the flavors my taste buds could register were represented in this perfectly balanced dish. Smoky fireroasted eggplant topped with creamy fresh tehina, drizzled with sweet silan, sprinkled with just the right amount of spicy diced chili peppers and a squeeze of lemon created a sublime party in my mouth, where the guest of honor was an awesome freshly baked flatbread. The bread was warm and crisp on the outside, soft and pillowy on the inside, with just a light brush of olive oil and a gentle dusting of rosemary, sea salt, pepper and herbs. I could eat that bread forever.Next came orange risotto served with shrimp and rosemary (NIS 79). I love it when something tastes familiar but there’s a little extra something that makes me feel like I’m rediscovering something wonderful in the world. It was light and creamy, with notes of rosemary in the background.Although the fact that the shrimp was not fresh but frozen detracted from my fully enjoying the dish, it was, nonetheless, a strong and confident plate of food.Homemade gnocchi with leek, mushrooms and asparagus in a cream and pistachio sauce (NIS 59) followed.This simple, earthy dish made me feel like I had just finished a long hike in the Italian countryside or some other picturesque European setting. The highlight was the gnocchi. The delightful little pillows of happiness worked wonderfully with the other components.Last was the creamy polenta with asparagus and Portobello mushrooms (NIS 49): rich and creamy cheesy goodness with some added color and texture from the mushrooms and asparagus. It reminded me of a richer, more decadent version of macaroni and cheese. Warm, comforting and so flavorful, it was a perfect highlight to a cold and rainy night.We concluded our dinner with the homemade plum tart topped with creme fraiche and chocolate ganache.I loved how it was both light and decadent at the same time.Overall, I think that Rina & Alice has a lot of potential for diners in the area, and I’m looking forward to seeing how Rinat and Alis grow as chefs and restaurateurs.

The writer was a guest of the restaurant.Rina & Alice
Not kosher
38 Keren Hayesod, Jerusalem
Tel: (02) 561-7638
Advertisement
Subscribe for our daily newsletter