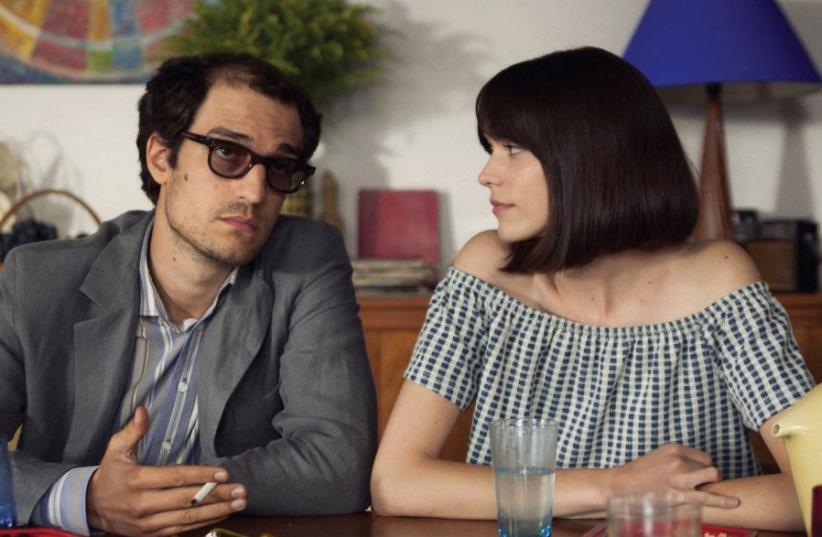 A scene from director Michel Hazanavicius’s film ‘Redoubtable,’ which will open the festival.
(photo credit: JERUSALEM FILM FESTIVAL)
Advertisement
In a few days, we’ll be able to identify them easily: the aficionados of the Jerusalem Film Festival at the Cinematheque, those who take a week of vacation and spend day and night there, watching movies from around the world. Bleary-eyed, slightly disconnected from reality, sequestered in their world of images and imagination.But what about the children, who just happen to have started their school vacation? Well, this year someone at the festival decided to take them into account and has planned a series of events just for them. And if that was not enough, these mostly outdoor events are free of charge.The 34th Jerusalem Film Festival will feature more than 180 films from all over the world in different categories. As every year, they will include several competitions as well, for a total of about NIS 500,000.Besides the Cinematheque, several locations have been chosen to screen the films: the city center, Hillel Street, the Old City, and Mahaneh Yehuda. The festival itself will start on July 13, but the children’s events will run from July 16 to 20 and will include a wide range of attractions.Inside Jaffa Gate, an interactive compound – a joint project with the Polyjam sound group from Berlin – will feature sounds and animation, where visitors will have the opportunity to compose their own music and project it via laser on the walls of the Old City. The light rail station at Safra Square will become a Wild West world with an “augmented reality” screen and a nearby photo studio available for all. Zion Square will also be part of the party, with a science fiction world that will include spaceships, a time tunnel and other thrilling activities. Beside the Italian Museum on Hillel Street, a few slightly more traditional devices will be on display, such as a trampoline, popcorn and clay-modeling workshops. Every evening, the walls of the Clal Building on Jaffa Road will serve as a huge video screen for children’s films. And for all viewers, there will be a wandering film festival.Screenings will also be presented in various neighborhoods in the city, which will bring residents some of the best productions of the film festival, free of charge.The festival itself will open with a screening of the French film Redoubtable by director Michel Hazanavicius (who won a Best Picture Oscar for his 2011 film The Artist). Hazanavicius will be the guest of honor at the festival’s opening night on July 13 at the Sultan’s Pool