One Love: The musical high of Damian Marley

Last week, the three-time Grammy-winning son of the legendary Bob Marley made his Israeli debut at the Live Park amphitheater in Rishon Lezion. 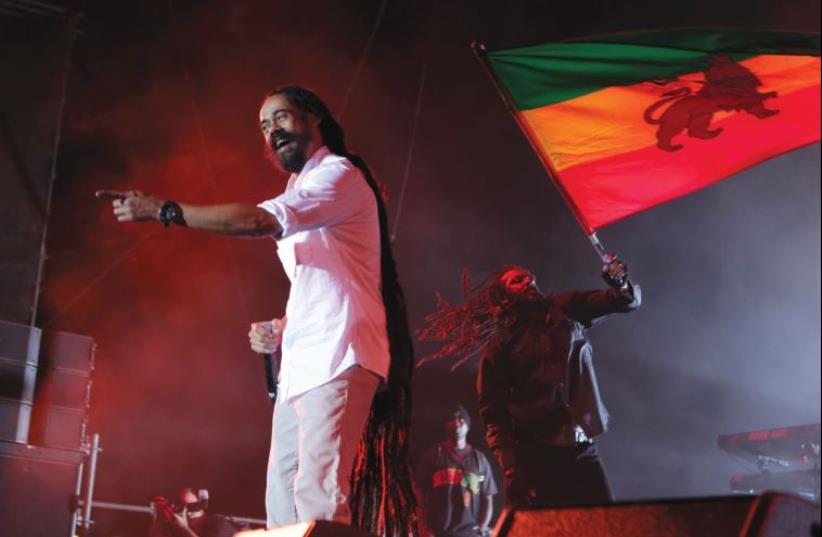 REGGAE MUSICIAN Damian Marley carries on the family tradition as he performs at the Live Park Amphitheater in Rishon Lezion
(photo credit: ORIT PNINI)
Advertisement
If your father is the symbol of an entire genre of music, it might be daunting to follow in his footsteps.But it didn’t seem so in Rishon Lezion as thousands of Damian Marley fans of every stripe gathered before the new amphitheater.Well before you got near the site, you could already hear the Rastafarian chanting, drumming and bass-lines.With grade-A musicianship from beginning to end, this musical high began when Sky High, the compelling Marley family MC, sprang on stage with the map of Africa stamped over his colorful outfit to introduce “Black Am I,” a dance-hall hybrid of Youssou N’dour and Bob Marley. Then came Damian Marley’s backing singer who resembled his late father’s “Queen of Reggae,” Marcia Griffiths, in tone, temperament and appearance. Each performer bounced on stage brandishing their own identity, but they were never unconnected artists with separate messages.Once the Rastafarian-flag bearer came onstage, the audience knew it was time for Damian. He entered with arms reaching out, wearing a white shirt, his floor-length brown dreadlocks behind him.“Shalom!” he shouted, immediately launching into “Confrontation,” an excellent Bob Marley & The Wailers cover.Marley’s interaction with the crowd grew stronger as the show progressed. He began giving them ground rules: “Hands up!” “Bounce like this” and “put your one fist in the air!” As a singer Damien is taut, fierce and inspiring, never self-indulgent or clichéd.“Israel is the promised land!” he called out to the already chanting crowd. The closing number, “Get Up Stand Up,” transformed the space and brought people together in ways that no artist other than a Marley could achieve.