The Marriage of Figaro

"On the whole, it was a pedestrian performance." 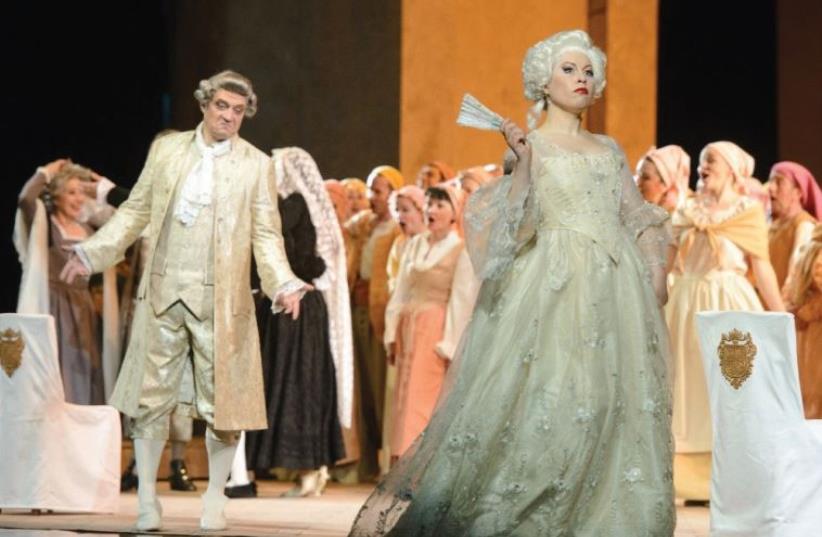 'The Marriage of Figaro'
(photo credit: Courtesy)
Advertisement
The Marriage of FigaroIsraeli Opera Tel Aviv Opera HouseNovember 5Mozart’s The Marriage of Figaro opened the Israeli Opera’s season, in collaboration with the Lithuanian National Opera.Emilio Sagi’s direction and Daniel Bianco’s sets were mostly conservative. The chief hero in Act One was a double bed, accommodating whomever felt like changing their upright position. The comic element of this opera buffa was emphasized, though the humor was often more forced than amusing. Figaro’s revelation as Marcellina’s son occurred in passing, without the presumably intended surprise effect. Figaro’s and Susanna’s quarreling and peace-making scene, one of the opera’s most moving moments, was handled as a marginal event.On the whole, it was a pedestrian performance. Most of the singers seemed to just act their roles, rather than identifying with them.In the title role Kostas Smoriginas appeared as a rather pale figure, not a dominating personality. His friendly baritone had noticeable difficulty climbing to the higher notes. The Jealousy Aria, one of Mozart’s great masterpieces, was rendered mechanically and indifferently. As Susanna, Joana Gedmintaite’s appealing soprano lacked the mischievous coquettishness and pepper of this soubrette role.In the role of the Count, Laimonas Pautienius’ authoritative baritone sounded too macho, lacking the dignity of his rank.The gentle personality of the Countess was represented too assertively and pseudo- dramatically by Sandra Janusaite’s sometimes unsteady soprano. In the trouser role of Cherubino, Dovile Kazonaite’s appropriately cute soprano lacked the naivety of this young boy. The most charming soprano was displayed by Lina Dambrauskaite in the minor role of Barbarina.The Lithuanian National Opera Orchestra, conducted by Martynas Staskus, discretely provided the emotional and dramatic support.Comparisons may be unfair, but the same opera, performed some months ago by a purely Israeli cast, proved that the local artists have nothing to be ashamed about – au contraire!