"The Israeli Opera Chorus was a major hero of this performance – highly impressive, perfectly synchronized, sonorous and rich in nuances of dynamics." 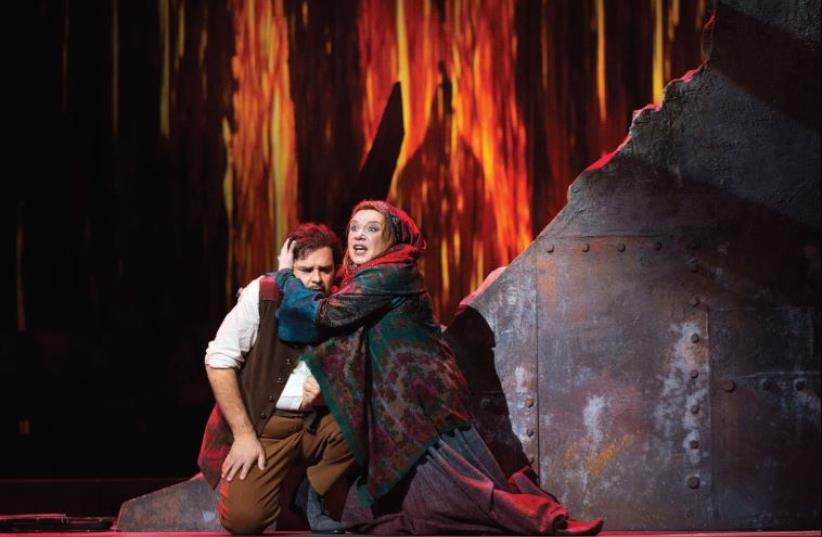 ‘IL TROVATORE’
(photo credit: Courtesy)
Advertisement
THE ISRAELI OPERA Verdi: Il Trovatore Tel Aviv Opera House December 31, 2015With Verdi’s Il Trovatore (aka The Troubadour) the Israeli Opera opened its new season on the right foot. It was a splendid performance.Like most of Verdi’s operas, he focuses here on the fate of the underprivileged who are persecuted by the ruling class.Here the victims are the gypsies who are burned at the stake due to an aristocrat’s caprices.Il Trovatore may well qualify as one of the most complicated, confused and confusing opera plots. Michal Znaniecki’s direction and Luigi Scoglio’s sets preserved the confusion and were abstract, in refined taste, without burdening the stage with superfluous details, leaving much to the imagination. Michal Rovner’s video art remained in the background where it belonged, without forcing itself on the audience and diverting attention from the stage.The cast was first-rate. As Leonora, Dinara Alieva made one understand well how a baritone and a tenor, and also members of the audience, fell in love with her clear, gentle, innocent- sounding soprano. In the title role, Gustavo Porta’s radiant tenor made him an irresistible lover and also a typically dumb male who, in his Rage Aria, was unable to understand Leonora’s self-sacrifice.His prolonged high notes were breathtaking. Disgusting though the Count’s character is, George Petean’s warm, resounding baritone made for a moving love aria. Marianne Cornetti, as Azucena, was an overpowering stage personality, conveying menace as well as fear. The final chilling surprise effect of her revealing Manrico as the Count’s brother could well have been the opera’s shattering climax, as presumably intended by Verdi, had it not been diluted by the orchestral din.The Israeli Opera Chorus was a major hero of this performance – highly impressive, perfectly synchronized, sonorous and rich in nuances of dynamics.Conducted by Daniel Oren, the Symphony Orchestra Rishon Le-Zion missed no opportunity to increase dramatic tension and followed the singers’ intentions with flexible sensitivity.