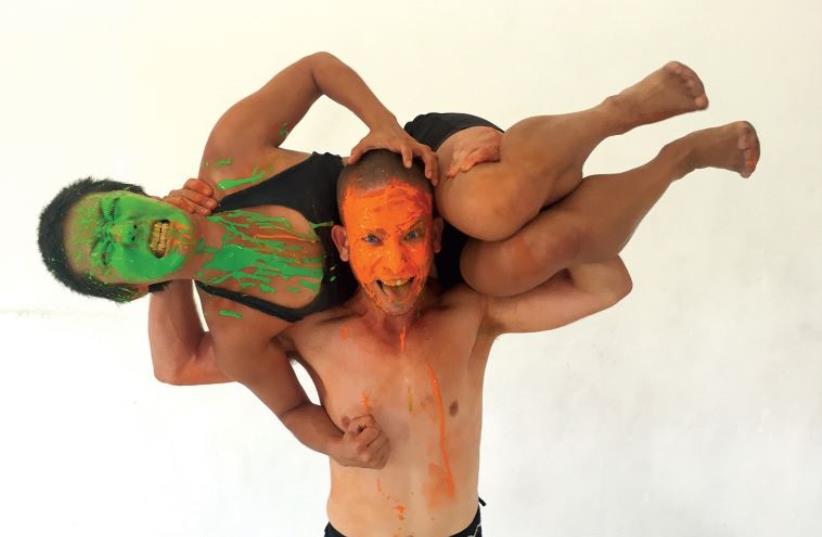 The Intimadance Festival
(photo credit: GADI DAGON)
Advertisement
By any standard, Dror Liberman is an energetic person. He is also young, talented, opinionated and, above all, motivated. A cross-disciplinary choreographer and performer, Liberman has spent the past three years establishing himself within the Israeli dance community. His unique esthetic, which draws on many different forms of movement and theater, sets Liberman apart from many of his peers, making his journey unpredictable and full of possibilities.Liberman, 28, will reveal his newest work, a collaboration with fellow Clipa Visual Theater member Kazuyo Shionoiri, this week as part of the annual Intimadance Festival at Tmuna Theater in Tel Aviv. The duet, entitled Here Comes the Hit, pushes the boundaries of physical confrontation between two strong entities.“Kazuyo is the best partner for me,” says Liberman. “She and I worked together in many different projects over the past few years at Clipa for other choreographers. The connection between us was very natural, very charged.”Liberman and Shionoiri began working on this project in March, when the festival’s call for applications was issued.“We started by writing a press release for the piece we wanted to make. We hadn’t set foot in the studio yet, but we tried to imagine ourselves sitting behind a desk, marketing this nonexistent work. We wrote about the ‘great Butoh artist from Japan’ and the ‘next big voice in Israeli dance.’ It was a way for us to consider the forces in our heads when we go into making a new creation,” explains Liberman.Liberman speaks very quickly, jumping from one subject to the next at a dizzying rate and intensity, punctuating his remarks with hand gestures. His knowledge of the international dance community is impressive, information Liberman gathered over countless hours watching videos on the Internet and reading up on artists he finds inspiring.Liberman’s seemingly endless source of energy has pushed him forward but has also placed him outside of many social settings. As a student of the Workshop in Haifa, Liberman needed to find ways to expel excess jitters at the end of the already long day of dancing.“There was a garden in the community center where we were based, and I found myself digging holes in the earth. I made a whole terraced system out there with a swing that I built. The parents of kids in the after-school classes would come and talk to me about it; often they offered me jobs arranging their gardens. But the school didn’t really seem to get or take notice of what I was doing. It was this weird, other activity of mine, completely disconnected from my dance practice,” he says.Although his teachers couldn’t see a link between hours perfecting turns and rolls on the floor, to Liberman shoveling dirt was as close to dance as anything.“I attended a lecture by Marten Spangberg where he talked about choreography as a broad process. That’s how I saw the garden, an expansion of my choreography. I made a piece in which I brought a bucket of soil into the studio and dumped it on the ground. Some of my teachers said nothing, others said they couldn’t comment on it,” he recounts.The sense of being an outsider has followed Liberman throughout his career. Always one to rebel against confines and structures, Liberman is constantly challenging conventions. He earns extra money juggling in one of the intersections in the entrance to Tel Aviv, a job he does with pride and pleasure.After school, the next step in Liberman’s development took place on the streets of Berlin.“For about a month, I was doing this outdoor show in Alexanderplatz, where I was kind of Spider-man. I was living this very punk life, performing outdoors with a group of people I found there,” he says.After relocating to Tel Aviv, Liberman joined Clipa Visual Theater. “I learned a lot from Idit Herman about how to use unconventional space,” he adds.That same year, he created The Lowest Spot in Tel Aviv, an outdoor performance in the streets of Neveh Sha’anan. The piece was performed more than 30 times in Israel and several times abroad.Following the success of The Lowest Spot in Tel Aviv, Liberman created another solo called Not Soft and Not Light. The work is a biographical account of Liberman’s life and family, tracing his route from Beersheba to the army through planting trees for the Jewish National Fund to Europe and back. At one point, he recites the names of each of his 10 siblings and their children, giving each relative a movement.“I’m the only one [in my family] who’s not religious, the only one who is totally different,” he says with a slight grin.When he came to create Here Comes the Hit, Liberman felt that he had to pull back from his use of text and focus on movement.“I think that the most revolutionary thing that I can find is to try to dance like someone in Batsheva. Dance is the best physical practice I can find. It keeps me in shape. Without it, I’d have a pot belly. In this piece, I wanted to really dance. For Kazuyo, dancing is so natural. She’s been doing it from the age of four. She can dance in her sleep. For me, just moving is an upheaval,” he says.The Intimadance Festival will take place July 21 to 24 at Tmuna Theater in Tel Aviv. For more information, visit www.tmu-na.org.il.

Tags What to do in Tel Aviv
Advertisement
Hot Opinion