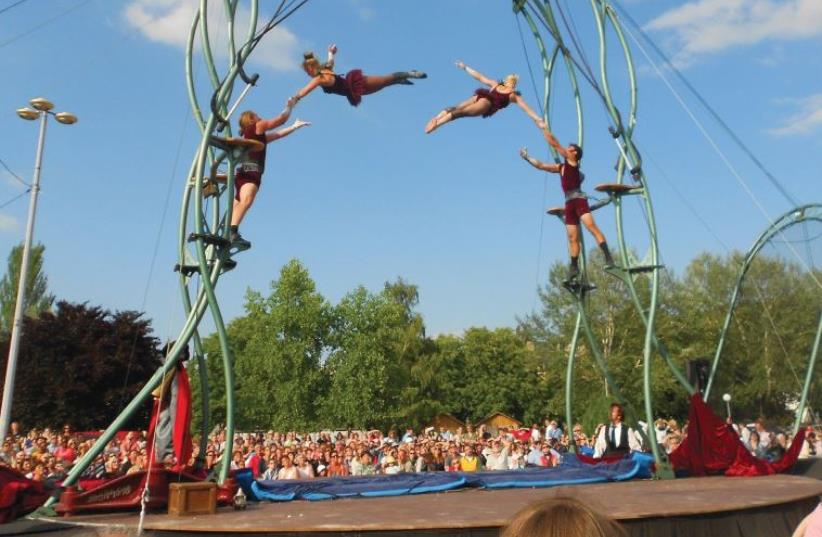 The fourth International Circus Festival in Modi’in-Maccabim-Reut
(photo credit: PR)
Advertisement
1. FILMS PEAK PERFORMANCEEverest tells the story of eight mountain climbers who, while attempting to reach the top of Mount Everest in 1996, encounter a severe snowstorm. As rescue missions fail, the climbers are left alone to survive on the mountain peak. The film is based on real events that have been described in seven books. With Jason Clarke, Jake Gyllenhaal, Josh Brolin.

2. MUSIC KUWAITI SONGS The 2011 album by Dudu Tassa and the Kuwaitis was a boon for Israel’s cultural scene, based on Tassa’s grandfather and great-uncle (Al-Kuwaiti Brothers), who were well-known musicians in Iraq. In Tassa’s next album, he delved even further into his heritage. He will perform some of these songs at the Kol HaOlam Festival.Wednesday at 9:15 p.m. at Gan Hameyasdim in Rehovot. For more information, call 050-200-6506; (08) 936-4979.

3. GUITAR GEMS The Guitar Pearls Festival is celebrating a decade with the participation of musicians from Israel and abroad. The Aquarelle Guitar Quartet from the UK will participate, along with music from Italy, world music, flamenco guitar, Latin jazz and more. There will also be a guitar-making workshop for the whole family with Alfredo Gonzales and an international competition for solo guitarists.Monday through Thursday (October 1) at the Netanya Culture Center and various other locations. For more information, call (09) 830-8811.4. CHILDREN TORAH TIMEAt the Torah in Technicolor Festival, the public will recite relevant passages from the Torah, as the king did in biblical times, while artists and the audience create artistic interpretations of the verses on the spot. There will also be creative arts events for the entire family, such as a scavenger hunt, art workshops in clay and origami, as well as musical workshops.Tuesday through Thursday (October 1) at the First Station in Jerusalem. “A Festive Reading of the Torah” takes place Wednesday from 4 p.m. to 8 p.m. For more information, visit www.jerusalembiennale.org.5. THE CIRCUS COMES TO TOWN During Hol Hamoed Succot, Modi’in-Maccabim- Reut is hosting the fourth International Circus Festival. For three days straight, a huge circus site with artists from Israel and abroad will include acrobatic and aerodynamic performances, juggling, pantomime and theater, fire performances, clowning and special effects with great virtuosity and a lot of humor.Tuesday through Thursday (October 1) from 6 p.m. to 10:30 p.m. at the Modi’in-Maccabim- Reut Center for the Performing Arts and various other locations. For more information and performances requiring admission fees, call (08) 973-7333; www.shows.org.il.6. THE ALICE OPERA SHOWAlice in Wonderland is a colorful operatic production for the whole family (in Hebrew). Alice’s wandering to the wonderland of imagination brings her to a place where everything is permitted, with no boundaries. Based on Lewis Carroll’s famous book. For age five and up.Tuesday at 11 a.m. at the Opera House in Tel Aviv. For tickets and more information, call (03) 692-7777; www.israel-opera.co.il.7. THE WOODEN SUCCA The Cube House Succa is a special display by artist Ya’acov Sasson. The succa can accommodate up to 70 children. The floor of the main portion is laid with doors that Sasson collected from old buildings in and around Tel Aviv. Visitors can enjoy different sounds and acoustics while walking on the parquet floor and build structures using some of the 3,000 wooden cubes of various sizes.Tuesday through Saturday (October 3) from 11 a.m. to 6 p.m. at the Levant Fair at the Tel Aviv Port. For more information, call Or at (03) 613-5284; 054-463-8400.8. ART SUCCOT BOULEVARD On Hol Hamoed Succot, street artists of Nahalat Binyamin will host the largest artisan fair in Israel, extending over 800 meters.The four-day fair will include original handmade crafts, musical ensembles and street musicians, human statues, murals, a glassblower, iron wire artists, jewelry, ceramics and much more.Tuesday through Friday (October 2) from 10 a.m. to 6 p.m. on Nahalat Binyamin Street in Tel Aviv. For more information, call (03) 516-9580.9. MIXED BAG SUCCOT WALKING TOUR A walking tour of the rich indoor facilities of the Jewish Quarter of Jerusalem’s Old City includes the four Sephardic Synagogues, The Herodian Quarter, the Burnt House, the Old Yishuv Court Museum and other fascinating points of interest.The tour is led by Dani Barkai for approximately 3½ hours. More walking tours are available during Succot.Wednesday at 11:30 a.m. For meeting place, more information and registration, call Dani at 050-771-7635; (02) 678-2483.10. THE GREAT VALLEY The Ma’ayanot Festival will take place close to old public buildings in villages across the Valley of Springs. Music performances will include Shlomo Gronich and Danny Robas, Chava Alberstein, Shuli Rand and Kobi Oz. Events for the entire family include tours and street fairs, gallery talks, a unique architecture collection exhibition at Gan Hashlosha, lectures and more.Tuesday through Monday (October 5) in various towns and locations in the Valley of Springs. For more information, call (04) 606-5860; www.maianot.co.il.