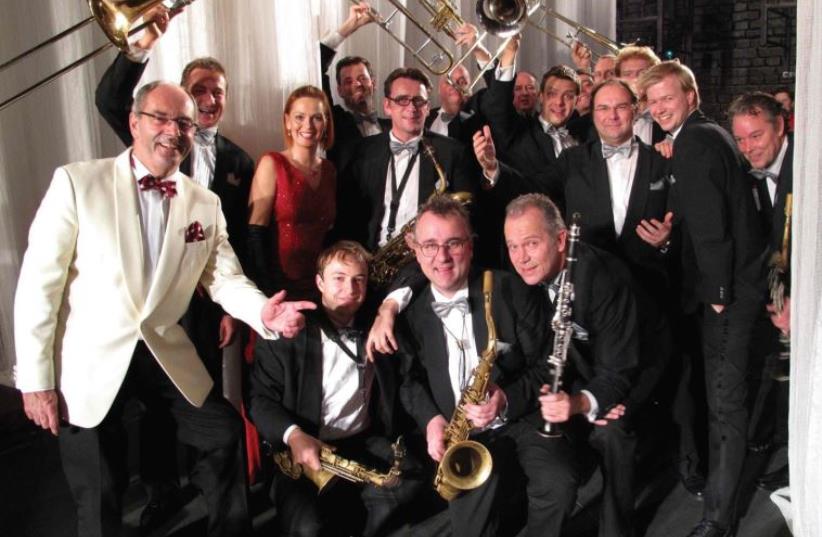 The Glen Miller Orchestra
(photo credit: PR)
Advertisement
1. FILM ONCE A CRIMINAL
In the film Manglehorn, the title character is an aging man who works in a clock shop. Except for the occasional flirtation, he lives a solitary life with his cat. However, 40 years before, he was a brilliant criminal who sacrificed his lifestyle for the love of his life. Now he contemplates that decision and its outcome. With Al Pacino, Holly Hunter.2. DANCE SACRIFICING THE SELF Berlin choreographers Jared Gradinger and Angela Schubot combine three parts of their works into one show. I Hope You Die Soon focuses on the disappearance of the individual body to become two on stage; Soon You Are Theirs deals with expanding movement onto the audience; and The Sacrifice has an artist binding the dancers on stage.Friday at 2 p.m. at the Tmuna Theater in Tel Aviv. For tickets and more information, call (03) 561-1211; www.tmu-na.org.il.3. DANCING IN THE SHUK “From Jaffa to Agrippas” is an initiative of the Katamon Dance Group and the Jerusalem Municipality. The two-day event will host top choreographers from across the country at bars and shops in and around the Mahaneh Yehuda market. There will be eight dance works with five debuts, featuring a variety of performers.Sunday and October 18 (Sunday) at Mahaneh Yehuda in Jerusalem. For more information: www.katamon.com/english; 050-781-1986.4.  MUSIC SWING IT BIG The Glenn Miller Orchestra, directed by Wil Salden, takes the audience on an exciting nostalgic journey through the big band swing music that was created by Glenn Miller, with classics such as “In the Mood” and “Moonlight Serenade.”Monday at 8:30 p.m. at the Mann Auditorium in Tel Aviv. For tickets, call *3221; www.kupatbravo.co.il. Tuesday at 8:30 p.m. at the International Convention Center in Haifa. For tickets, call (04) 837-7777.5. CLASSICAL SEASON The Tel Aviv Soloists Ensemble opens the 2015-2016 concert season with The Classical Series: Brahms and Shostakovich.The concert is dedicated to the memory of pianist Esther Balasha, with her student Bshara Haroni on piano and trumpeter Yuval Shapira. The program includes Brahms’s String Quintet Op. 111 and Piano Concerto No. 1 by Shostakovich.Saturday at 8:30 p.m. at the Rapaport Auditorium in Haifa. For tickets, call (04) 836-3804. Sunday at 8:30 p.m. at the Israel Conservatory of Music in Tel Aviv. For tickets, call 054-693-4439. Monday at 8:30 p.m. at the Weil Center in Kfar Shmaryahu. For tickets, call 054-693-4439. Tickets also available at www.soloists.co.il.

6. RISHON HOSTS RUBTSOV The Israel Symphony Orchestra Rishon Lezion hosts Russian flutist Maxim Rubtsov. The concert program includes Tchaikovsky’s Symphony No. 5; Pied Piper Fantasy by John Corigliano (concerto for flute and orchestra); and the Israeli composition Adagio (for chamber orchestra) by Betty Olivero. Conducted by James Judd.Saturday and Sunday at 8:30 p.m. at the Culture Hall in Rishon Lezion. Monday at 8:30 p.m. at Beit Ha’am in Rehovot. Tuesday at 8 p.m. at the Tel Aviv Performing Arts Center. For tickets, call (03) 948-4840; www.isorl.com.7. FROM YOUTUBE TO THE WORLD Ukraine-born pianist Valentina Lisitsa is a YouTube star of classical music. She is the first classical artist to have converted her Internet success into a global concert career in the principal venues of Europe, the US, South America and Asia. In Israel, Lisitsa will perform a recital of works by Bach, Chopin, Rachmaninoff and Liszt.Friday at 11 a.m. at the Ashdod Performing Arts Center. For tickets, call (08) 956-8111.8. VIOLIN MAESTRO Berlin-born Kolja Blacher will perform Tchaikovsky’s Violin Concerto and Beethoven’s Symphony No. 7 with the Jerusalem Symphony Orchestra. The acclaimed violinist has performed with the Berlin, Munich and London Philharmonic orchestras, the Mahler Chamber Orchestra and more. He serves as a professor of violin at the Hanns Eisler School of Music in Berlin.

Thursday at 8 p.m. at the Jerusalem Theater. For tickets, call 1-700-70-400; *3221; www.jerusalem-theatre.co.il.9. ART OZERI’S LENS A new solo show “Paintings through the Lens” by renowned artist Yigal Ozeri is exhibited in a series of new works that include oil paintings, water colors and a new technique using Polaroid film.The exhibition is accompanied by a new artist’s book and the world premiere of a documentary film that invites the viewer into Ozeri’s studio.

10. MIXED BAG 10 STEP INTO THE FUTURE The Tel Aviv Museum of Art is hosting a futuristic night of adventurous multidisciplinary experiences that pay homage to the world of the machine and modern technology. The event includes exhibitions, lectures, films, musical performances, food stalls and other activities. Among the participants are Gilad Kahana, Dana Arieli and Ohad Pishof.