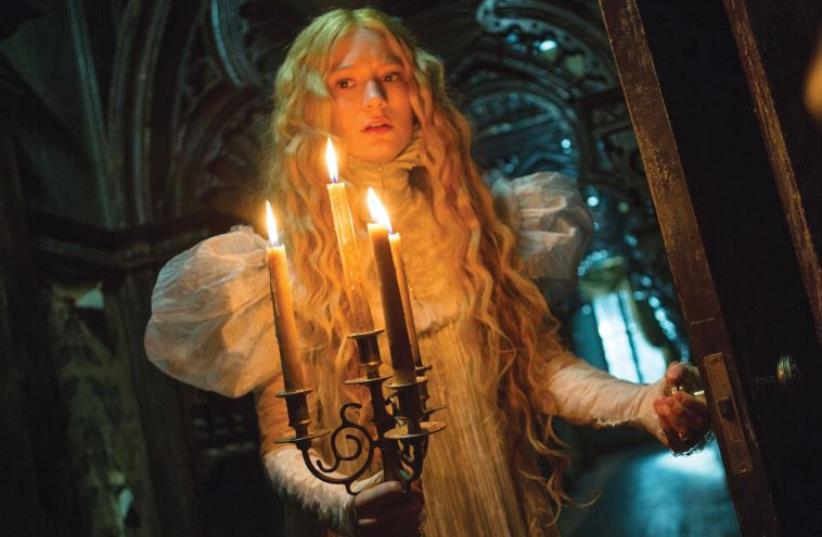 'Crimson Peak' movie
(photo credit: PR)
Advertisement
1. FILMS GORE GALORE The dark film Crimson Peak tells the story of an aspiring young author who marries a mysterious stranger who turns her world upside down. Her new path takes her to a Gothic mansion filled with secrets that will haunt her forever. Ghosts, blood, fear and madness lead her to remember her difficult past. With Jessica Chastain, Tom Hiddleston.2. NORTHERN EXPOSURE The five-day Galilee Docaviv 2015 Festival features more than 30 Israeli and international documentary films. There will be meetings with actors and directors (e.g., the cast of the TV show Fauda and actor Kobi Faraj); activities for the whole family; workshops such as creating comic books; lectures; local tours; and culinary delights.October 27 to 31 in Ma’alot Tarshiha at four locations: the Culture Hall, the Church Club, the Arts and Gallery Center and the Gras Community Center. For more information: (04) 957-3050; www.docaviv.co.il/ galilee2015/.

3. TELEVISION YOU BETCHA Season Two of Fargo, with Kirsten Dunst, Patrick Wilson and Ted Danson, has garnered high praise from TV critics. The bulk of the season takes place in 1979, involving a local gang, a crime syndicate and a cosmetician from a small town. The show is based on the Coen brothers’ 1996 film Fargo.Thursdays at 10 p.m. on HOT Plus and HOT VOD.4. DANCE BALLET OF LIFE The Ness Ziona Ballet Company, founded by choreographer and dancer Eli Lazar, will launch the season with Freedom.Lazar has 30 years’ experience acquired in the US. Freedom is a neoclassical piece representing Lazar’s return to Israel and the beginning of a new journey. It depicts the development from boyhood to maturity, accepting reality for what it is.Thursday and Friday at 9 p.m. at Kiryat Hatarbut, 1 Hashiryon St. in Ness Ziona. For tickets, call (08) 930-4020/4; www.tarbutnz.co.il.5. MUSIC EUROPEAN BLUES The Blues Company is from Osnabrück, Germany. Founded in 1976, it was the first German band to play blues professionally on stage. With more than 3,000 performances in Europe and the US, the band helped spread blues globally, especially in Europe. The Blues Company will tour Israel for four days, concluding with a Q&A session.Thursday at Mike’s Place in Jerusalem. Friday at Mike’s Place in Eilat. Saturday at Mike’s Place in Tel Aviv, Tayelet. Sunday at Mike’s Place in Tel Aviv, Ramat Hahayal.All performances at 10:30 p.m. For more information, visit www.mikesplacebars.com; or call Assaf at 054-929-2551.

6. JSO GRAND OPENING The Jerusalem Symphony Orchestra opens its third season with a celebratory concert, One Thousand and One Nights, featuring conductor and percussionist Chen Zimbalista. The program includes works by Bach, Vivaldi, Arban (The Carnival of Venice), a world debut by composer Dotan Moshonov and guest Beni Bashan, musician and poet.Thursday at 8 p.m. at the Jerusalem Theatre. For tickets, call 1-700-704-000; www.jerusalem-theatre.co.il.7. LOVE DUO Weinberg & Russo have performed across Israel for the past three years as both a duo and an ensemble. They released their debut album Stay in July. Their first single, “All This Love,” has become a hit. At the Piano Festival, they will perform with singer Gilad Kahana, as well as a cellist, pianist and bassist.Thursday at 10:30 p.m. at the Piano Festival at the Tel Aviv Museum of Art. For tickets, call *9080; www.zappa-club.co.il.8. BOUZOUKI GIANT Greek musician Christos Nikolopoulos, a virtuoso bouzouki player and talented composer, is celebrating his 50th anniversary of composing music. He will perform one concert in Israel with guests Yota Nega and Vasilis Lekas. They will be accompanied by seven musicians from Greece, performing popular hits that have greatly influenced Israeli culture.

Thursday at 9 p.m. at the Culture Palace (Heichal Hatarbut) in Tel Aviv. For tickets, call *9066; www.eventim.co.il.9. MALABI RIVALRY The new musical Malabi by the Mayumana dance troupe is based on songs by Matti Caspi. It tells the story of two malabi stalls in the heart of Jaffa that stand opposite each other that belong to two families. An old rivalry exists between the two families, but no one can remember how or when it began. Within the drama a love story emerges, filled with humor, joy and effervescence.Thursday at 8:30 p.m. Friday at 3 p.m.Next Friday (October 30) at 10 p.m. at the Mayumana House in Jaffa. For tickets, call *9066; www.eventim.co.il; www.mayumana.com.

10. ART 3D PAINTINGS The exhibition “Man Ray – Human Equations” is comprised of a series of paintings that Man Ray considered to be the pinnacle of his creative oeuvre. The paintings were inspired by his innovative photographs of three-dimensional mathematical objects. They are displayed for the first time in Israel, together with string models from the Institut Henri Poincaré in Paris.Open during museum hours at the Israel Museum in Jerusalem. For more information, call (02) 670-8925; www.imj.org.il.
Advertisement
Subscribe for our daily newsletter