The six-day festival, which is in its ninth year, is holding sessions in eight cities throughout Israel, Gaza and the Palestinian Authority, including in Haifa, Jerusalem and Nablus. 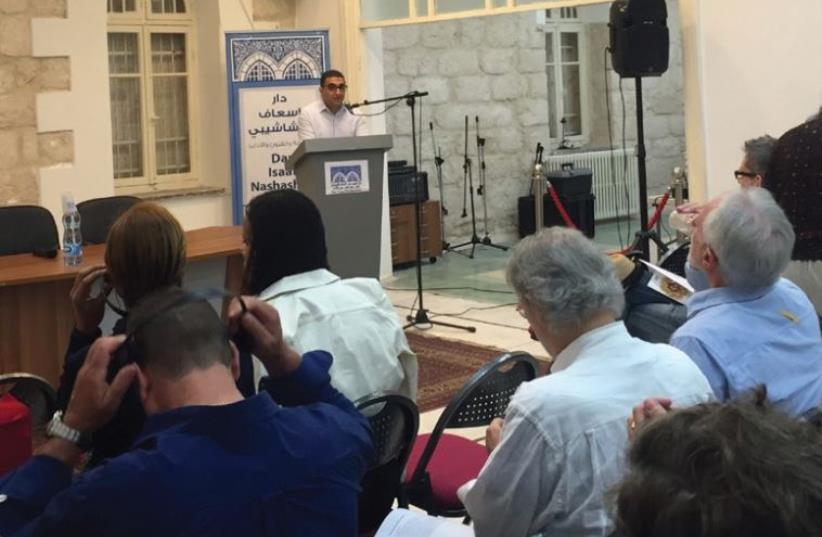 Crowds gather for the opening of the Jerusalem session of the Palestine Festival of Literature at Dar Issaf Nashashibi house in Sheikh Jarrah
(photo credit: SETH J. FRANTZMAN)
Advertisement
After the Egyptian revolution had come and gone, the Arab Spring had had its say and General Abdel Fattah al Sisi was installed in Cairo, Jack Shenkar tried to take stock of what he had seen.“All narratives of revolution are outstripped by events; this one has been completed at a time when the counter- revolution is in full flow,” writes Shenkar in his recently published The Egyptians. He was one of almost 40 writers, poets and artists who showcased their work this week at the Palestine Festival of Literature.The six-day festival, which is in its ninth year, is holding sessions in eight cities throughout Israel, Gaza and the Palestinian Authority, including in Haifa, Jerusalem and Nablus. Its final event takes place tonight in Ramallah and will include Ahmed Masoud, founder of the Al Zaytouna Dance theater, and iconic South African author J.M. Coetzee.“This is the festival’s biggest year so far,” says Omar Robert Hamilton, the producer of the event. “It feels like every year the festival grows in statue, in reputation and in the scale of both its traditional and social media outreach.”By including a new generation of writers, translators and editors, he says the festival helps bring exposure to Palestinian intellectuals and bring them into the “literary mainstream.”Because the festival straddles the Green Line, Hamilton says that some authors faced visa entry problems.The group coming to Jerusalem had to wait several hours and was interrogated at a checkpoint. In Jerusalem on Sunday at the stately Dar Issaf Nashashibi house in Sheikh Jarrah several hundred attendees crowded into a room to hear several poets and writers. Dana, a Palestinian from Jerusalem, said that she felt the event went well, and was particularly struck by Iraqi-born author Haifa Zangana and African-American author Rickey Laurentiis from New Orleans, saying of the latter, “He gave me goosebumps.”She says that Jerusalem should have more Arabic-language or Palestinian- focused cultural events, but adds that they need to be better marketed to the local population.“Many people only hear of such events via Facebook.”At the Nashashibi house venue on Sunday, as the sun began to set it was clear that this unique event had brought together a diverse blend of audience members, including a smattering of Israelis.