The Eden Tower was designed by celebrated Polish-Ameerican architect Daniel Libeskind, in coordination with Israeli architect Yigal Levi, and will be built over the former Eden Theater. 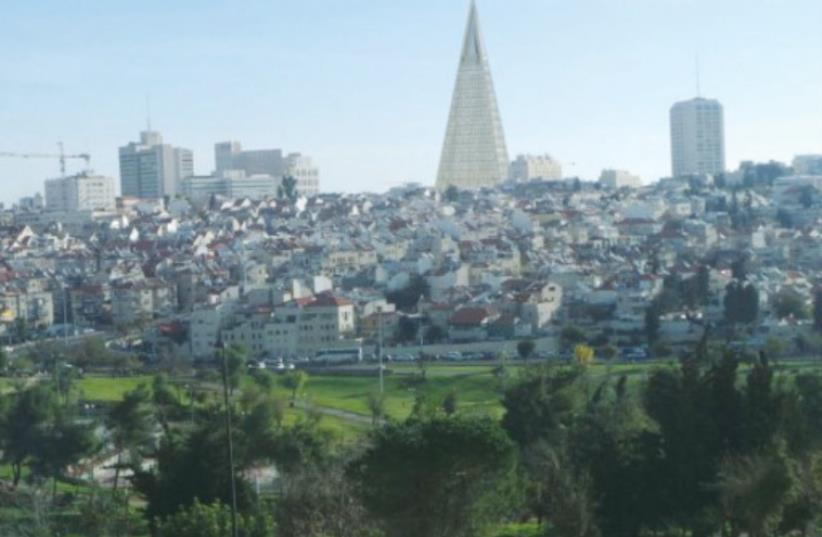 AN ARTIST’S RENDERING of how Jerusalem’s originally planned Eden Tower would have altered the city’s skyline.
(photo credit: ISRAELI ASSOCIATION OF UNITED ARCHITECTS)
Advertisement
The Jerusalem District Planning and Building Committee this week ordered the height of a controversial pyramid-shaped skyscraper scheduled to be constructed downtown be significantly scaled down.The Eden Tower was designed by celebrated Polish-Ameerican architect Daniel Libeskind, in coordination with Israeli architect Yigal Levi, and will be built over the former Eden Theater, adjacent to the Mahaneh Yehuda market, between Agripas and Eliash streets.Although the Jerusalem Municipality approved plans in July for the sprawling 165 meter-high luxury residential building, the planning committee ordered that the height be reduced to 118m.According to the municipality, the height reduction is the result of numerous complaints from the Israeli Association of United Architects, the Council for Preservation of Heritage Sites in Israel, the Society for the Protection of Nature in Israel, as well as the general public.The objections largely concerned the impact the tower would have on the city skyline, its damaging impact on the ground, and its incompatibility with the city’s current master plan, which sets rigid standards of all construction in the capital.The architects association also claimed that the plan was approved without a properly scaled simulation of how it would alter the city’s historic skyline.Plans for the building were initially nearly unanimously approved, with the exception of Deputy Mayor Pepe Alalu, who argued at the time that the height of the tower exceeded regulations.Still, Jerusalem Mayor Nir Barkat has long championed largescale downtown commercial construction projects as a means of revitalizing the capital’s anemic economy, creating more jobs, and attracting younger residents to the city.On Thursday the municipality issued a statement acknowledging the changes imposed by the building and planning committee.“The local planning committee decided today that the height of the planned building will be returned to that approved in the previous master plan,” the statement said.“In addition, the building’s lines will be preserved so the neighbors are not harmed beyond what was set in the previous debate. The interface with the street and public space will be improved.”