They will perform Brahms’s second concerto under the baton of Avi Ostrowsky. 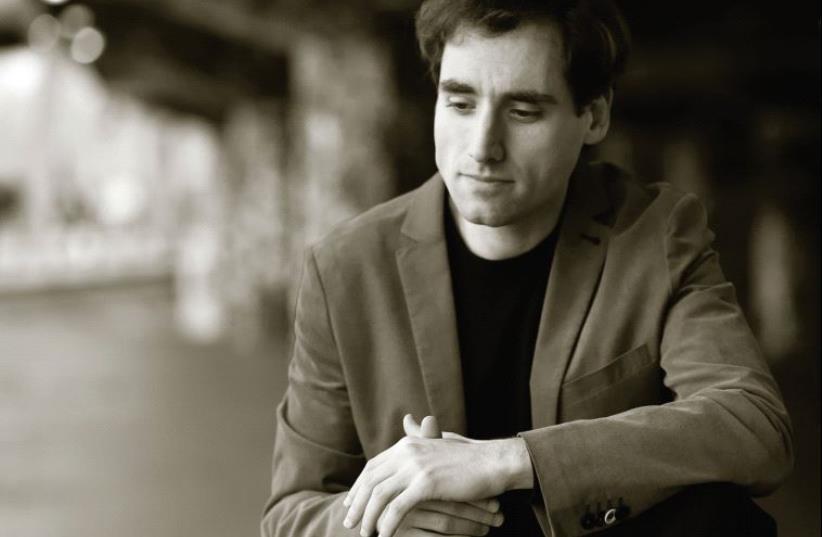 Pianist Boris Giltburg
(photo credit: SASHA GUSOV)
Advertisement
Israeli pianist Boris Giltburg, 32, is a busy performer. Between September 24 and 26, he will participate in the Rishon Lezion Symphony Orchestra’s concert, playing Brahms’s second concerto under the baton of Avi Ostrowsky.To illustrate just how busy he is, he says that one day before the concert series starts, he will perform a piano recital in Amsterdam, playing a difficult program that includes pieces by Scriabin, Liszt and Rachmaninoff, and then two days after the last concert here, he will fly to China to perform Chopin, Shostakovich and Rachmaninov at a gala Rubinstein recital in Beijing.Born in Moscow, with a family heritage of piano-playing (there were several generations of pianists behind him), Giltburg convinced his mother to teach him piano. He was five years old when the family moved to Israel, where he continued to study at home, later becoming a student of professor Arie Vardi.Winning first prize at the Queen Elizabeth Competition in Brussels in 2013 catapulted his career. A year and a half ago, he launched a long-term recording project with Naxos label, and he has already recorded three albums of music by Beethoven, Rachmaninoff and Schumann. An album that is now in the making will include Shostakovich’s piano concerti, as well as Giltburg’s own arrangement of the composer’s String Quartet No. 8.What do these composers have in common? “First, there are two big groups of composers that I love – Russian and German. Second, everything that fuels the imagination attracts me, be it Schumann’s fantasy or the dark world of Shostakovich’s quartet or his concerti,” he explains. “I perceive some of Rachmaninoff’s etudes as rich paintings, while I see others as stories that evolve in front of your eyes – or ears.”With his career on the rise, what pushes him forward as a musician? “A sense of dissatisfaction – and I am not talking about my career. I constantly feel that a piece can be performed better, that it is possible to delve deeper, to present richer colors, which are hidden in the score. There’s no end to it. No way you can say, ‘OK, I’m finished with Beethoven, I know everything, nothing much to do here.’ Returning to my recordings, made just two or three years ago, I realize that I play them differently now – and not especially better,” he says.Is there any vector of his development as a pianist? “I think it is a sense of freedom.It doesn’t mean that everything is allowed, but rather a wider approach to the piano music – to try to treat it like a string player or a vocalist would. Tension between the notes, resistance of the material – I have started approaching these concepts only recently,” he says.Giltburg is talented in other spheres as well. Photography is his passion. Fluent in five languages, he translates German, English and Russian poetry into Hebrew.“I have also translated The Dragon by Evgeny Schwartz,” he says, referring to a classic play by an iconic Russian Jewish satirist, in which he depicts in Aesopic language the ugly reality of Stalin and post-Stalin USSR.“In a way, it is close to Shostakovich’s eighth quartet.Both were brought to life by the same historic circumstances,” he says, adding, “But now I have less time for translating. I write a lot of articles about music, which one can read on my blog.”He enjoys traveling and hiking as well, but music comes first.In regard to Brahms’s second concerto, which he is about to perform, Giltburg talks about the difference between its movements, which “make it sound like a selection of pieces, yet one can see them as different layers of life events, and there is not always continuity and logic in life.”The pianist confides that both Brahms’s first and second piano concerti are among his favorite pieces.“I love them for their greatness of soul. Interesting enough, his harmonic language is rather simple, but this is not the simplicity of poverty or just of lack of expressive tools. Just the opposite – with these simple tools he somehow managed to penetrate the very depths of the listener’s heart and soul. Just listen to his third symphony or the German requiem. And even if you try to analyze it, you still can’t know how he achieved it. This is a pure magic,” he marvels.“I sometimes think that the score is just a gate or a road to something larger that lies far beyond the notes. A note is definite, objective: it has length, tempo, volume. But music is subjective, and that is where the interpretation starts. There are many renditions of the same piece not only by different performers but even by one specific musician, and it is smaller than the piece itself, which is infinite. But going on stage, a performer needs to have a concept of the piece, at least for that particular evening, even if tomorrow he plays the same piece differently,” he says.In summation he says, “I enjoy the immediacy of live performance. I love the magic, the silence of the audience. You may not have composed the music, but you still create it live.”The concerts take place September 24 and 25 in Rishon Lezion; September 26 at the Opera House in Tel Aviv; and September 27 at Beit Ha’am in Rehovot. For tickets: (03) 948-4840