Putting on a show 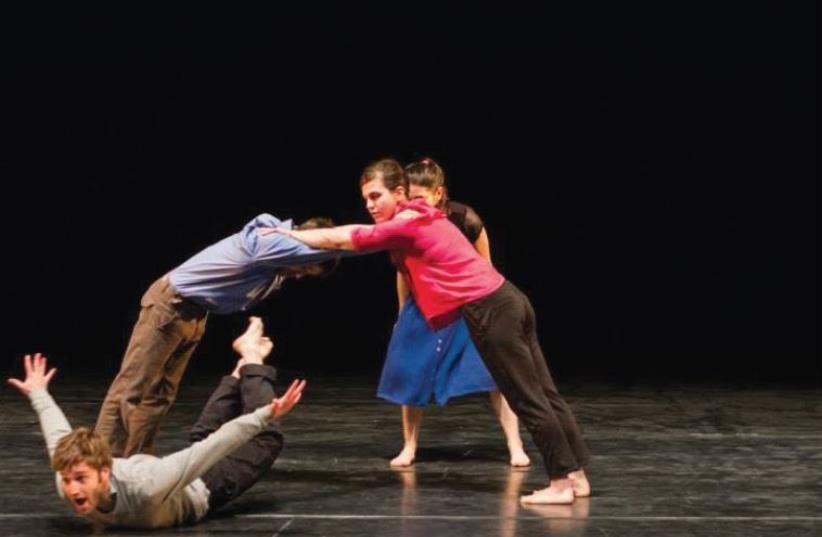 DAPHNA HORENCZYk and David Gordon’s 'Like This My Nephews Can Do'
(photo credit: ERAN ABUKASSIS)
Advertisement
The number one rule of showbiz – the show must go on – is so overused we often forget its meaning. But for many performers, those five words outline a lifestyle of sacrifice and hardship aimed at one goal: to put on a good show.Daphna Horenczyk is not one to candy-coat the life of the independent artist. In fact, she is incredibly forthcoming about the amount of time, sweat and tears it takes to translate an idea into something put before an audience. And perhaps because she is so forthright about the trials and tribulations of real life, she is able to delve into a world of humor, sarcasm and lightness in her works.Tonight, Horenczyk will present a three-part evening entitled Like This My Nephews Can Do Too at the Suzanne Dellal Center. The show will take place in the intimate Yerushalmi Hall as part of the annual Tel Aviv Dance Festival. The program is the result of a two-year collaboration between Horenczyk and composer and musician David Gordon.“David and I have produced this evening three or four times,” explained Horenczyk. At the age of 29, Horenczyk speaks with the mystifying clarity of a longtime veteran of the arts. “We have no financial support whatsoever. Each time we have taken side jobs in order to pay for it. No one supports us financially and we are dedicated to paying the dancers what they deserve.”As such, Horenczyk spent the past month waitressing to pay for the various production elements such as a lighting designer and stage manager.And though the struggle certainly weaved its way into the studio, Horenczyk described the program as “fun” and “light.”Horenczyk began her professional relationship with dance at the Kibbutz Contemporary Dance Company’s professional dance program.After graduating, Horenczyk spent one year freelancing in Tel Aviv before relocating to Austria, where she enrolled at SEAD (Salzburg Experimental Academy of Dance). While abroad, Horenczyk began choreographing, creating three works that were presented by multiple festivals around Europe and in Israel.She met Gordon by chance at a concert over two years ago. Realizing they shared a heap of common ground, the two decided to collaborate.“He saw that my works speak about how not to fall into avant-garde or conceptual art, how to laugh at it a bit. That’s the essence of what he wrote and that’s what I do. For both of us, working together felt right,” she said over the phone.To Horenczyk, Gordon revealed a composition, entitled Like This My Nephews Can Do Too, that had collected dust for a decade.“He felt it needed a stage interpretation and couldn’t be performed alone. The original composition was for four musicians. The work that we made was [for] four dancers.”The quartet premiered as part of the Machol Shalem Festival in 2013 and featured Ma’ayan Horesh, Nitzan Lederman, Ofir Najary and Daniel Pakes.“We began by telling the dancers to improvise to the music. I gave a lot of freedom to the dancers.Through the process I realized that it’s harder to be precise with situations than movements. I had to constantly negotiate with myself how I was directing them. In order to pass on an idea to them, I had to first understand it very deeply. To give a physical task, I had to really know what I wanted. I took ideas from their improvisation, interpreted them and then gave them back to the dancers. To this day, even though it’s two years later, the work isn’t completely set. It is about 70 percent improvised.”Continuing the line they began with the quartet, Horenczyk and Gordon collaborated on a duet, which they perform together. In Ma Lach…? the two use various technological elements to monitor movements and produce sound.The final work in the evening is a video piece produced by Gordon.“When we extended the original piece into a full evening, we added a video of four musicians. David took the players and filmed them individually at his house. The first and only meeting of the four musicians occurs on the screen. They never played together. It is another arrangement of the original composition.”Tonight will mark Horenczyk’s last performance before moving indefinitely to Munich. Though she leaves with a heavy heart, Horenczyk is no longer willing to sacrifice everything to make her art.“The image of the starving artist has passed from this world,” she said. “When I came back from Austria I promised myself that I would create my own opportunities, that I wouldn’t complain. At the end of the day, money is the most tangible form of feedback out there and the financial reality here is very hard. We’ve gotten such great responses to this work but eventually, you run out of friends and family to invite and then it gets tricky. Lately I feel as though the country is pushing me out. I experience the country like a personality that doesn’t want me here. Until I feel welcome here again I don’t know if I will come back. I don’t feel at home here and if I don’t feel at home anywhere I might as well live in better conditions.”Like This My Nephews Can Do Too will run at tonight at the Suzanne Dellal Center at 9 p.m. For more information, visit www.daphnahorenczyk.com.