The Margosa is a courtyard hotel in the heart of Old Jaffa. 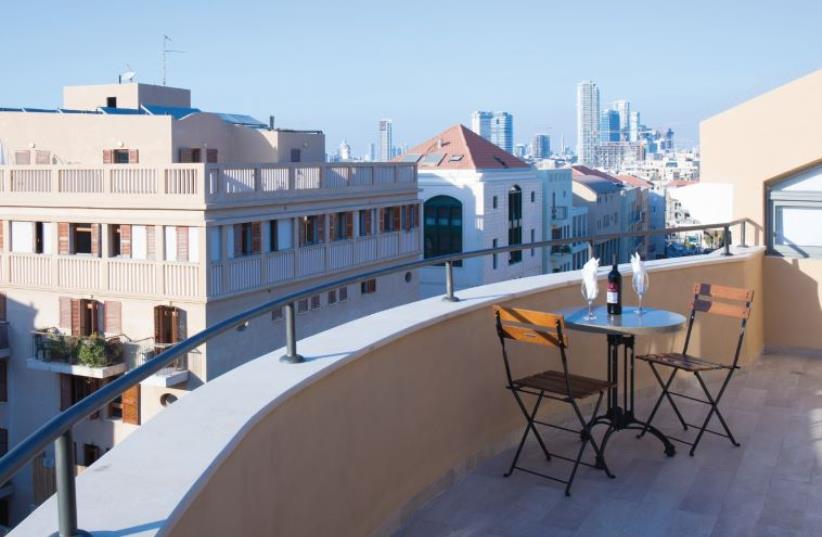 The Margosa hotel in Jaffa
(photo credit: PR)
Advertisement
If you like your hotel experiences to be quirky – in all the best connotations of the word – then run, don’t walk, to the Margosa in Old Jaffa.Quirky, like being housed in a funky, refurbished apartment building with wide angular staircases that make you think you’re in an old Bette Davis film; quirky, like having the main part of the bathroom exposed, with the sink in clear view of the sleeping area; quirky in having full-length mirrors hanging by a wire from the ceiling; and quirky in featuring a double-nozzle shower head so a romantic couple can suds each other up without one freezing outside the water line.The six-story, 35-room Margosa, which opened its doors last summer after two years of development and renovation, marks the second entry into the boutique hotel sweepstakes in the constantly gentrifying Jaffa, following the debut of the Market House a few blocks away.A short walking distance to the flea market and Jaffa Port, the Margosa is betimeing marketed as “a courtyard hotel in the heart of Jaffa.” Indeed, one advantage of the Margosa is its location on a relatively quiet side street a block or two away from the tumult of one of the country’s most bustling locations.“We’re not just marketing the hotel but the whole area and the special atmosphere of Old Jaffa,” said Avi Agajany, the general manager of A.A. Hotels Ltd., which manages the Margoza. “In general, eighty-five percent of hotel guests in Tel Aviv are tourists, and 15% are local. At the Margosa, it’s been almost 30% domestic tourism because this area, with the flea market and the port, is really loved by Israelis.”Agajany, accompanied by the hotel’s chief architect Daniel Revesz, spoke to a group of journalists invited to sample the hotel.“As a boutique hotel, or a city hotel, we of course have to provide all the basic needs – be it hot water, air conditioning and comfortable rooms – but that’s not enough,” Revesz explained. “In our opinion, a hotel has to create a special environment and offer a special experience to its guests that provides a distinct separation from their daily lives.”Using the motif of Jaffa oranges (the building is on the site of a former orchard), Revesz and his team integrated modern and traditional styles meant to introduce surprises to the guest.“On the second or third view, guests will discover something new about the room that makes it a little different from home – whether it’s the sink in the middle of the room, the doors of the shower or the unique ceiling or window shades,” said Revesz. “We hope it creates an interesting and esthetic experience.”Revesz and his team have succeeded in spades. From the bowling pin ornament in the corner of the guest room to the wooden bench bordering the living area, the Margosa features delightfully different details.And the minutiae are found not only in the guest rooms. An extraordinary collection of black-and-white photographs of Old Jaffa from the 1920s enhances the corridor of every floor, the work of Frank Scholten, a German Christian pilgrim who took tens of thousands of photographs during the early 1920s.As attractive and stimulating as the surroundings may be, the proof of a hotel’s function lies in its amenities. From the free Wi-Fi and smart TVs that give you access to Facebook and YouTube (in case you want to watch The Kinks perform “Lola” on Top of the Pops in 1971) to the free underground parking lot to the scrumptious and ample breakfast spread that far exceeds the mass-produced mega-hotel offering, the Margosa proves it’s not just a pretty trinket but can deliver the goods.Every spacious guest room has a beautiful, equally ample porch overlooking an Old Jaffa scene or the picturesque orange tree-dotted courtyard below, which is also an enchanting place to enjoy a cup of coffee at the 24-hour lobby bar.And the prices? According to Agajany, the owners are not out to empty anyone’s wallet. “Our prices are reasonable, from a midweek $130-150 per night for a couple to slightly more for Thursday through Saturday.”That combination of location and price has created a buzz around the Margosa.Soon after opening its doors in July, occupancy increased to 80%. And even with the downturn in tourism brought on by the stabbing intifada and, more recently, the week-long manhunt for Tel Aviv bar shooter Mashat Milhem, the occupancy rate remained high.After a brief stay there, it’s not difficult to understand why. The writer was a guest of the hotel.Hotel Margoza, Yehuda Margosa Street, corner of 1 Avraham Even Shushan Street, Jaffa.www.margosa-hotel.co.il