The song and video, he said, will be rotated extensively on MTV Israel and then parlayed to other MTV stations in Europe, as well as YouTube. 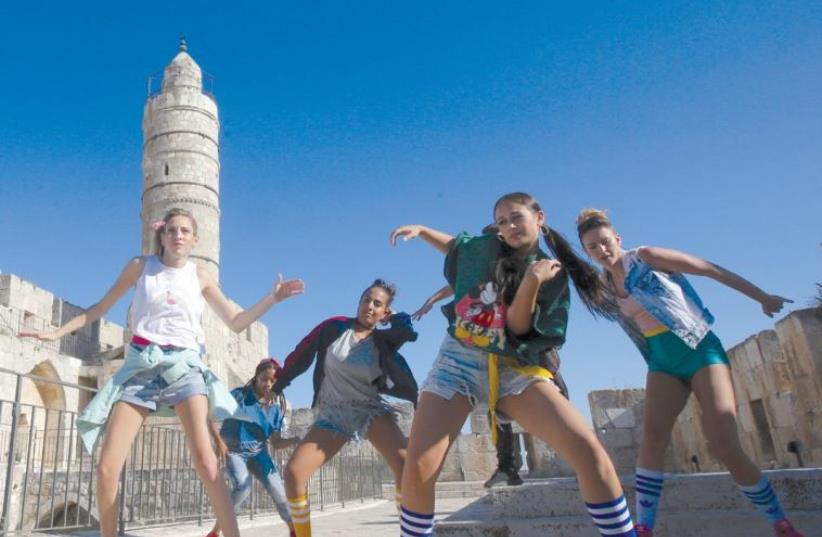 DANCERS OUTSIDE the Tower of David in the capital are filmed yesterday as part of a hip hop video that hopes to portray the city as a cool place to visit. (
(photo credit: MARC ISRAEL SELLEM/THE JERUSALEM POST)
Advertisement
Jerusalem and hip hop may appear to go together like a minyan with oversized gold necklaces featuring dangling dollar signs, but a popular young Israeli rapper is hoping to change that perception.Skateboarding down a hill between the light-rail tracks on Jaffa Road on a sunny Sunday afternoon – with a rollerblading cameraman coasting backwards ahead of him – Erez Sharon, known to his fans as EZ, shot one of five segments for a video promoting the capital set to air on MTV Israel.Sporting pink shorts, a blue Hawaiian shirt buttoned to the top, Vans baseball cap and Adidas sneakers, Sharon, 29, said he was approached by the Jerusalem Film Festival and Jerusalem Development Authority last week to pen a tribute to the city and film an accompanying video.“They asked me to write a song about how you can enjoy Jerusalem at every age, no matter who you are,” he said, after filming of the skateboard scene was cut short when a honking tram came perilously close.“This is the first song I wrote in English, so I hope people like it.”Sharon, who has released two successful albums in Israel, as well as multiple singles, said the song is about a female tourist who visits Jerusalem and falls in love with the city, instead of him.“So, in the song I’m asking her to come again, and tell her that when I saw [the city] through her eyes, it made me appreciate the paradise I’m living in,” he said. “Usually, when I write a song, I need inspiration, but when it’s on a subject like Jerusalem it was too easy.”And, although Sharon hails from Netanya and is fully aware of Jerusalem’s growing geopolitical quagmire, he said it only took him two hours to write the tribute – a fraction of the time he spends writing most of his raps.“It normally can take weeks or even months to write a song, but this was easy because I know the city and visit it a lot, and everyone has a place in Jerusalem,” he said.“It doesn’t matter who you are, you will find something to do in Jerusalem.”Conceding that the city is undergoing a rough patch, following 10 months of violence, Sharon said he hopes the tribute will resonate with his young fans, spurring them to visit.The song, which he has yet to title, will debut with the video at Sacher Park on July 13 at MTV Bounce, a free Jerusalem-based event that celebrates the Israeli hip-hop scene in music and dance.The concert will feature EZ, as well as MTV Israel’s leading hip-hop musicians and artists, including Static, Benel Tavori, Noa Kirel, and DJ Juvi, who will host the event.To showcase the city, the production team, led by director Nimrod Peled, is shooting sequences at Mahaneh Yehuda market, Jaffa Road, Jaffa Gate, the Tower of David and a skate park in Liberty Bell Park.Featuring EZ surrounded by 20 scantily-clad teenaged dancers and two young models, Peled said he hopes the video, which is being filmed in one day with a production staff of nearly 100, will redefine the common perception of Jerusalem as a religious, intolerant and divided city.“I think that a lot of people think Jerusalem is kind of old, and maybe serious – that there is something very heavy about it,” he said. “So we wanted to capture the feeling, excitement and all the young energy in the air in Jerusalem...“We wanted to show people that Jerusalem is young and hip, and I think that hip-hop, skateboarding and the street vibe is very important to this project.”The song and video, he said, will be rotated extensively on MTV Israel and then parlayed to other MTV stations in Europe, as well as YouTube.Asked what he hopes the world will think of Jerusalem after viewing the video, Peled, a young tattooed Tel Aviv resident, responded with a decidedly hip-hop spirit.“I want the world to go like ‘shiiiiiit, Jerusalem is cool!’” he said with a broad smile.