The late great Indian director’s films are the subject of a retrospective at the Jerusalem, Tel Aviv and Haifa cinematheques. 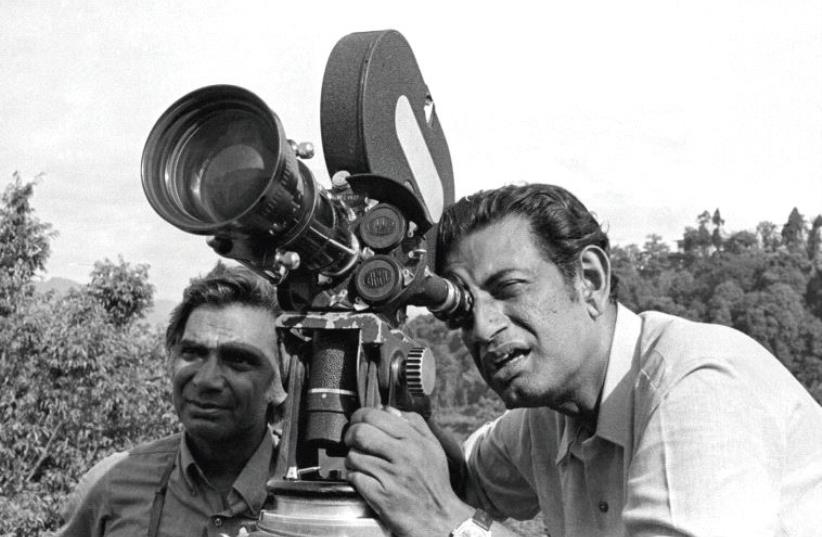 INDIAN FILMMAKER Satyajit Ray on the set of his first film, ‘Pather Panchali,’ in 1955
(photo credit: IMDB.COM)
Advertisement
One of the great, enduring masters of cinema, the late Satyajit Ray’s movies have inspired generations of filmmakers. His work is the subject of a retrospective that runs through August 8 at the Jerusalem, Tel Aviv and Haifa cinematheques.In another program focusing on Asian films, the Tel Aviv Cinematheque will feature a weekend of films on Buddhism starting July 29.If you have any interest in quality cinema at all, you should seize this opportunity to see Ray’s work on the big screen. Yes, some of his films are available on DVD, but seeing them at home will never come close to the impact they have in a theater.Although India is famous for its Bollywood musicals, it has always had serious cinema as well, and Ray was its leading director.Ray was born in 1921 to an intellectual Bengali family in Calcutta and started out as an artist, but after meeting French director Jean Renoir and seeing the films of the Italian neorealists, he moved into filmmaking.Ray directed 37 films, which won dozens of international awards, and received an honorary Oscar shortly before his death in 1992.He is best known for the Apu trilogy, three films about the life of one character as he grows into a young man, and all three will be shown in the retrospective. Pather Panchali (1955), based on a classic Bengali novel, was Ray’s first film. It tells the story of Apu (Subir Banerjee), a bright boy from an impoverished family in rural India. Some, like Bosley Crowther, then the critic for The New York Times, found the movie too slow and unfocused. In a review in which he referred to Ray as “Roy,” he wrote: “Any picture as loose in structure or as listless in tempo as this one would barely pass as a ‘rough cut’ with the editors in Hollywood.” But fortunately, most audiences had more patience than Crowther, and the movie, which won awards at Cannes and other festivals, is considered a classic today.In the follow-up film, Aparajito (1956), a bookish Apu goes to study in Calcutta. Although Pather Panchali is the most famous of the trilogy, my favorite is the third, The World of Apu (1959), which stars two of Ray’s favorite actors, Soumitra Chatterjee and Sharmila Tagore, as the adult Apu and the woman he meets and marries under the most unlikely circumstances.All three films are beautiful, human dramas, not political statements about Third World poverty.It would be ideal to see these movies in order, but all of them work as standalone films.The Music Room (1958) tells the story of an aging feudal landlord who holds onto his property even though he is deep in debt.In the 1989 film Enemy of the People, Ray adapts the famous Ibsen drama to modern-day India. A doctor, also played by Soumitra Chatterjee, discovers that the spring that brings holy water into a Bengali temple is contaminated. He is pressured to keep this knowledge a secret, and must fight the corruption in the town’s political and religious establishment to try to protect citizens’ health.The Home and the World, another literary adaptation and one of Ray’s later films, is based on a novel by Rabindranath Tagore. It tells the story of a maharaja in the early 20th century who has modern ideas and wants his wife to go out into the world. When she does, she falls in love with an anti-British activist played by Chatterjee.The Stranger was Ray’s last movie, released in 1992.It tells the story of a family who learn that they will be getting a visit from an uncle no one has seen in decades. Is he truly a long-lost relative, or an impostor who wants to get something out of them? The film explores the family’s dilemma.The three films on Buddhism at the Tel Aviv Cinematheque will be Between White Clouds, about a hidden journey of Zen Buddhist monks in China, with a lecture by meditation teacher Yonatan Domenitz; Koan of Spring, a French-Vietnamese drama about a quest and self-discovery (accompanied by a lecture by Yuval Ido Tal); and The Beauty of the Story, a colorful film about the wisdom and music of different cultures, along with a lecture by Professor Jacob Raz, a professor of Buddhism, Zen Buddhism and Japanese culture.For more information and to order tickets, go to the individual cinematheques’ websites.