Arais rivals fancier steakhouses when it comes to beef. 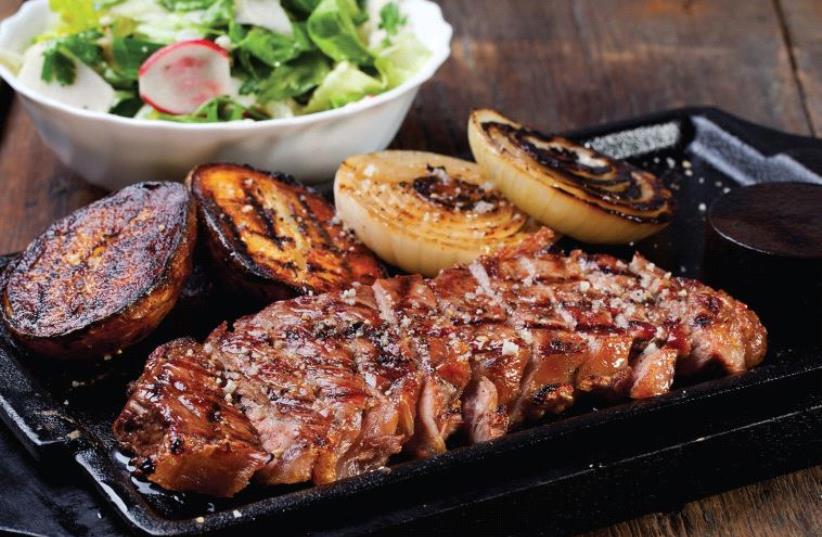 Arais House of Meat
(photo credit: PR)
Advertisement
The tantalizing aroma of grilling meat wafts from the open kitchen of Arais, a no-frills restaurant that occupies prime corner space on the northern exterior of Sarona Market. Most of the restaurant’s seating is al fresco, with views of both the Sarona compound and the chef at work.The English and Hebrew menus are not extensive, but there are enough choices to make deciding interesting. There are no cocktails and a very limited selection of beer and wine. With our glass of red wine (NIS 35) and bottle of domestic beer (NIS 29) came complimentary zesty black and green olives.For our first starter we ordered the beef carpaccio (NIS 52), a generous platter of razor-thin slices of filet, with salsa-topped bruschetta. Salt dominated in the highly seasoned beef, but the effect was practically addictive; and the mild salsa enhanced the flavor without clashing with it.As our healthful starter, we chose the oven-roasted vegetables (NIS 36), called “orange vegetables” on the Hebrew menu. The sweet potato, squash, large carrot and red (not orange) pepper were very gently seasoned and roasted just right – soft but not mushy – allowing the natural flavor and goodness of the vegetables to emerge.We were pleasantly surprised when the waitress appeared with the eggplant and baba ganoush starter (NIS 37), insisting that we try this house specialty. The nice presentation featured a mound of baba ganoush in the center of half a baked eggplant, with a dollop of red salsa for color. I do not usually order baba ganoush as an appetizer, but this was the best I have had in ages.Somewhat surprisingly, therefore, these two dishes combine to make Arais a recommended choice for vegetarians/vegans, in spite of the restaurant’s full name.The steaks at Arais are listed separately from the other meat main courses. One bears the intriguing name Denver cut (NIS 168), which a little research revealed to be a premium cut of beef. The Hebrew menu renders it entrecôte, a term with which most Israelis are familiar.Regardless, the 350 grams (larger than the standard 300-gram portion of entrecôte) of steak makes a great first impression: arriving on a sizzling hot cast iron platter embedded in a wooden tray. The meat itself, under glistening grains of coarse salt, was cooked more medium-rare than our requested medium, but it turned out that the grillmaster knows best. The wellmarbled steak – tender, juicy and flavorful – was as good as, if not better than, any I have eaten in recent memory.The sides of roasted potato and grilled onion were the ideal complement to the meat. The potato halves were a perfect golden brown under grains of black pepper, and the onion melted in the mouth.The accompanying green salad was unremarkable.The Hatikva kabob (NIS 57), named after Shuk Hatikva, came with the same sides, as well as a refreshing chopped tomato salad in tehina. The two lamb kabobs themselves were a tad on the dry side but tasty nonetheless.There are four desserts on the menu, two of which were chocolate and one that was already sold out.The chocolate-whiskey mousse with toffee crunch (NIS 38) was light and fluffy, although the liquor was barely noticeable.The satisfactory lemon pie (NIS 26), meanwhile, was an upsidedown version: lemon pudding underneath miniature peaks of white meringue and a sprinkling of crumble.Just on the fringe of the bustle of Sarona Market, Arais boasts quality – and prices – equal to Tel Aviv’s finest steakhouses.The writer was a guest of the restaurant.Arais House of Meat
Not kosher
3 Kalman Magen St., Tel Aviv
Tel: (03) 550-9070