Review: A 'zany' time in Jerusalem

Once again, the Comedy for Koby revue delivers the goods 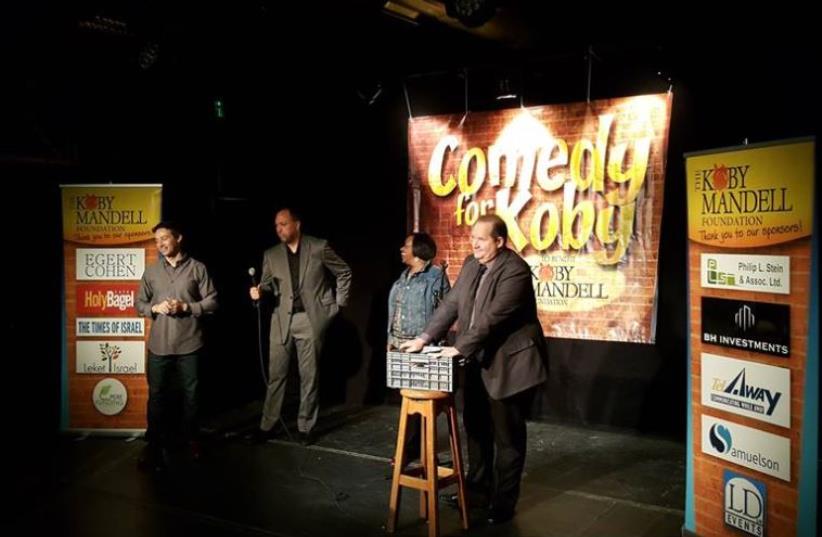 Comedy for Koby
(photo credit: Courtesy)
Advertisement
Avi Liberman’s holy mission to bring English-language comedy to Israel to benefit the Koby Mandell Foundation received a formidable boost with this season’s rollicking edition.Joining organizer and host Liberman, who has been recruiting leading American comedians on his bi-annual tours of Israel for over a decade, were Seattle-based Kermet Apio, East coaster Erin Jackson and veteran TV and movie actor Bob Zany.Having already appeared for a week in various locations around the county, by the time they got to Jerusalem, the comics had localized the beginnings of their routines before heading into their stock material.Liberman especially focused on Israeli and Jewish topics throughout his opening act, and provided some of the night’s biggest laughs.
Offering his explanation on why there were no jury trials in Israel, he said, “Can you imagine 12 Israelis ever agreeing on anything?”Both Apio and Jackson, on their first visits to the country, both commented on their visits to the Carmel Shuk and the cultural differences between the US and Israel. Jackson hilariously recalled being forced to taste a slew of  various spices  at one stall because she didn’t want to offend the vendor, and Apio described tasting halva for the first time.“It gave me some insight into you people You see a sesame seed and think, ‘hey, this could be dessert!”With a deadpan-delivery, the Hawaiian-born  Apio also spent well-deserved time lamenting his unique first name and its Sesame Street connotation. “On the first day of school, the other kids with unique names would go ‘great, we’re off the hook this year.”The most polished performer was Zany, who had a rumpled Rodney Dangerfield thing going on combined with biting Don Rickles-style audience participation. With quick comebacks and off the cuff insights, he was a little unfocused by very side-splitting.As  has been tradition, the shows were sanitized for off-color bits, which may have protected the sensitivities of the more-observant members of the sold-out audience, but held back the performers from displaying all they had to offer.Maybe future tours could A offer a PG-rated early show and a no—holds barred late show. The Jerusalem audience is ready for some raunch from these funny guys and gals.Comedy for Koby, Beit Shmuel, Jerusalem
December 3, Late show