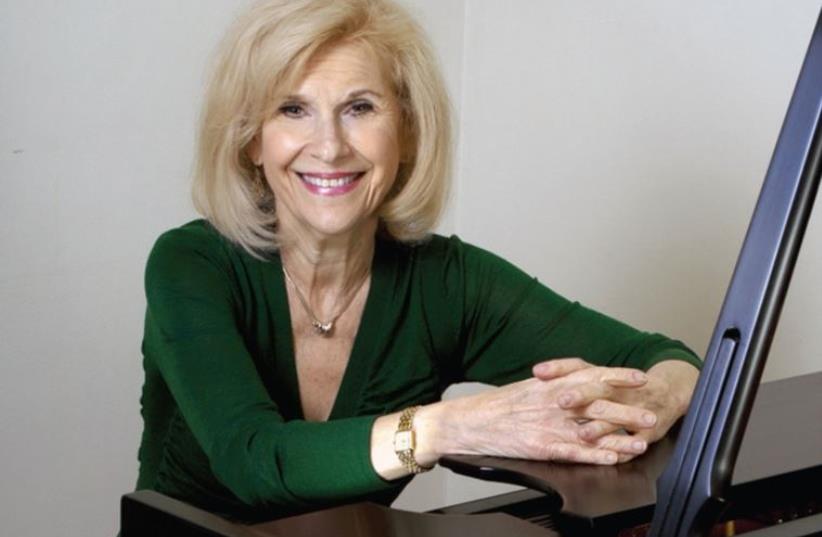 Lenore Raphael
(photo credit: PR)
Advertisement
At the age of 73, jazz pianist Lenore Raphael brings an abundance of experience to her gigs these days, as well as a lot of street-level wisdom. “I think that over the years you become a more mature musician, and you learn you can play less,” she posits.But jazz fans should not fret that they will be short-changed at her gigs here, which kick off next week. The veteran New York-based musician will join forces with fellow New York resident, Israeli-born guitarist Assaf Kehati, with local jazz saxophonist Amikam Kimmelman joining the improvisational fray. As far as Raphael is concerned, less is definitely more.She should know. Over the course of the last half century, Raphael has mixed it with the likes of legendary trumpeter Clark Terry and iconic vibraphonist and drummer Lionel Hampton. Raphael also feeds off a right royal slew of jazz titans, such as stellar pianists George Shearing, Bill Evans and Oscar Peterson. The latter was one of the more robust exponents of jazzy ivory tickling, so, presumably, following his lead helps keep one’s chops in good shape. “Yes, that does help, and I have been accused of having old technique, which frankly I do.”Raphael may have learned the benefits of imbuing her keyboard work with a more economical line of sonic attack, but she has put out an abundance of charts over the years, recording seven albums as leader and earning a couple of Grammy nominations in the process. Raphael started out on her musical road on the classical side of the industry. While she forsook the more structured art form for the more swing-based blues–fueled endeavor, Raphael says she is eternally grateful for the grounding she gleaned as a youngster before Peterson’s oeuvre tempted her into jazz. “Studying classical piano definitively gave me a good basis for what I do today. I had a very strict teacher who always played the right note with the right finger, and she taught me proper fingering,” she says. But Raphael wasn’t always so appreciative of the disciplinary hard line. “When I was seven years old I thought, ‘What do I need this for?’ but evidently I did,” she chuckles, with more than six decades’ worth of hindsight. “It really makes the difference.”And Raphael was clearly no slouch at classical exploration, evidenced by an appearance at Carnegie Hall at the age of 18. That must have been quite an experience for the youngster, although Raphael says the significance of playing at such a venerable venue went unappreciated. “To tell you the truth, I was too young to really realize what it was all about,” she recalls. “I just wanted to get it over with and have some ice cream.”That added value is of a technique- related nature, but Raphael says there is also something in the spirit of classical creation that has left its mark on her and comes out in her playing. “One of the things I love to do is to take a jazz piece and play it like a two- part Bach invention,” she says. There are those who believe that classical musicians are simply incapable of improvising and that the divide between jazz and classical music is unbridgeable. Raphael begs to differ. “That way, it shows that classical music and jazz aren’t that different,” she says.Even so, the Jewish septuagenarian feels there is one fundamental difference between exponents of the two disciplines. “I think classical musicians know how to improvise. The question is whether they know how to swing. That is very different,” she points out. Indeed, many posit that Bach was the original jazz master and classical music incorporated plenty of improvisation before it became an altogether more rigid affair in the 19th century. For Raphael, it is a simple matter of tempo. "You had only 12 notes in the chromatic scale, that's all you get, so the only difference is in the rhythm," she states.Besides entertaining audiences all over the world, Raphael has done some sterling work on the teaching side of things. She also worked with, and gleaned from, one of New York’s foremost jazz educators and subsequently a torch bearer for the Israeli jazz scene, late saxophonist Arnie Lawrence.Lawrence, who ran a music school in Ein Kerem in Jerusalem and devoted much of his time to blending the musical sensibilities of Jewish and Arab players, also impressed on Raphael the benefits of cutting away the gristle. “We did a unique thing. We did a saxophone and piano duo, no rhythm section. Arnie would look at me, I was playing all the rhythm, and he’d say, ‘You don’t have to do that, the rhythm is implied.’ I thought about it and realized that it was right, that it made sense,” she recounts.While there is no substitute for heard-earned road time and the lessons one learns over the years, Raphael says she is more than happy to join forces with artists like Kehati, who is half her age.“Young musicians have a different approach to jazz. They think differently because the music they know is different. In order to keep playing, you have to adapt and learn from everyone,” she says.Raphael et al will perform in Tel Aviv on October 28 at 9:30 p.m. at the Shablul Club; in Safed on October 29 at 9 p.m. at the Khan of the White Donkey; and in Haifa on October 31 at 8:30 p.m. at the Studio Theater. For tickets and more information: Shablul (03) 546-1891 and www.shabluljazz.com; Safed 077-234-5719; and Haifa (04) 810-0104 and http://hastudio-tr.co.il/